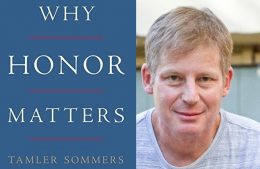 Dr. Tamler Sommers is an Associate Professor of Philosophy at the University of Houston, and the co-host of the Very Bad Wizards podcast along with Dr. David Pizarro. It’s a show that blends psychology (Pizarro’s field of expertise) and philosophy, mostly for the purposes of exploring and mocking bad philosophy and psychology. Sommers’ new book, however—Why Honor Matters—is more conciliatory in tone, trying to make a reasonable case for honor to an audience that has become skeptical of the goodness—or perhaps even the existence—of honor.

After being interviewed on Sam Harris’ highly popular Waking Up podcast and on Brett McKay’s Art of Manliness podcast, the book has done remarkably well for only having been released on May 8. As of this writing, its Amazon rankings include first place in Customary Legal Theory & Systems, second place in Alternative Dispute Resolution, under “law,” and fourth place in Utopian Ideologies and Doctrine, under “political science.” In short, this book is poised to be relatively influential upon the moderate Left, where Sam Harris, Jordan Peterson, Joe Rogan, and others of the “intellectual dark web” dominate the metapolitical conversation online.

The core of Sommers’ argument is that as our society has become “civilized” and moved from honor-based cultures of old into dignity-based cultures, something has been lost. Sommers acknowledges the difficulty in defining honor, but does a good job of explaining (primarily by illustrative examples) what honor is, in contradistinction to dignity. Dignity is inherent in each individual, and thus is inherently individualistic. Not so with honor. “Honor is social; it cannot exist for individuals in isolation. For honor frameworks to function, they need what I’ll refer to as an honor group—a collection of people bound by a set of principles and values.”

Sommers presents the value of honor first as intrinsic. The reality of Sommers’ depiction of honor is placed in stark contrast with the views of many other liberal academics, most notably with those of Steven Pinker, who sardonically describes honor as “the strange commodity that exists because everyone believes that everyone else believes that it exists.” Indeed, one of the enjoyments of reading Why Honor Matters is Sommers’ habit of occasionally taking a jab at Pinker, particularly Pinker’s defense of the Enlightenment.

In addition to the intrinsic benefits of having honor, however, there are practical values as well. Citing the evidence of health and happiness derived from social connection, and the loss of personal relationships to which the abandonment of honor has led in modern life, Sommers lays out a case for the superiority of “restorative justice,” an honor-based theory of criminal justice that seizes ownership of the criminal justice process from the State and re-personalizes it. By reframing the conflict as between individuals rather than between an individual and an arbitrator like the State, Sommers persuasively argues that we can reduce incarceration rates and simultaneously restore a healthy degree of interpersonal vitality through resolving conflict ourselves, rather than though a third party. This process of resolving conflict draws us closer together as a community and makes our relationships and lives more substantive, more meaningful, and more real.

Perhaps the most interesting implication of his book as it relates to politics is his exploration of the difference between conceptions of identity in dignity cultures and honor cultures. In dignity cultures, identity is conceived of in individualistic terms, which means that group memberships such as family, nation, race, or sports-team affiliation are all veneers that hide one’s “true self.” In honor cultures, the affiliations and memberships are not covers for one’s identity, but rather its very substance.

But alas, Sommers himself is not immune to the politically-correct anxiety that plagues much of modern academic writing. After much hand-wringing about the dangers of honor culture—racism, blood feuds, and violence against women—he explains that his mission is not merely to encourage a return to some aspects of honor culture, but also to impose constraints on honor. This anxiety anticipates a number of internal contradictions that make some parts of the book eyebrow-raising, and other parts downright irritating.

Most of the early parts of the book are punctuated by ever-present reminders of the dangers of tribalism, violence, and sexism. Indeed, in the Prologue, Sommers is pointed enough to say, “[i]f you’ve picked up this book looking for a subtle or sideways defense of racism or sexism, you’re going to be disappointed.” Yet after the reader wades through all of the tiresome warnings about violence and blood feuds, we finally come across the question that had been neglected until page 106: Is violence immoral?

The inevitable answer, of course, is “not necessarily.” Not only does Sommers observe that violence is always “morally motivated” (which is not the same as “moral,” of course), but he even quotes Frederick Douglass, saying “human nature is so constituted that it cannot honor a helpless man, although it can pity him.” It seems that we are required to be capable of violence if we are to have honor.

He actually goes further, but without seeming to realize it, in laying out how violence—or at least the simulacrum of violence—is necessary for an honor group to cohere. He even comes dangerously close to defending the blood feuds he had spent entire paragraphs condemning:

Many believe that conflicts can only divide communities, but the truth is closer to the opposite. Take feuds, for example. Honor cultures are notorious for their feuds, and there’s no denying that they can cause tremendous suffering and unnecessary loss of life. But feuds also foster a deep sense of social harmony and cohesion within the feuding groups. Indeed, some anthropologists regard this to be the primary evolutionary function of tribal feuds, the reason they’ve persisted, even with the loss of life that they cause . . .

As it turns out, violence within the context of honor culture is usually already constrained by the rules of the very honor norms which demanded violence in the first place. Sommers explains this more thoroughly in the section in which he defends the logistical and moral practicality of dueling.

But perhaps the most obnoxious of all was a section in Chapter Two. After laying out the importance of hospitality, and bemoaning the obsession with safety in our modern society (illustrated with a relatively innocuous passage about his moral crusade against bicycle helmets), he argues that it is downright cowardly that Americans would refuse to accept refugees based on the vanishingly small threat of terrorist attacks. “It’s shameful, cowardly, not to bear the negligible risk that the wrong person will make it through. We’re not cowards; we’re Americans.”

Ironically, it would have been a reasonably compelling argument from an individualistic, “dignity” perspective, because it is true that no Syrian migrants have committed terror attacks in America. But in the context of honor, wherein individual members are responsible for acts and tendencies held by the group, and groups are thought of as singular entities, this argument fails on two fronts and puts Sommers in dangerous waters.

First, migrants have committed violence and terrorism in Europe, which demonstrates a group-trend for which the migrants themselves are accountable. The obligations of hospitality are reciprocal, and while they may require us to set aside our own safety for the sake of honor, that very same honor requires us to not only refuse hospitality, but to return the bloody favor when our would-be guests betray our trust. Without the threat of the latter, the obligation to the former becomes a misguided act of suicidal naïvety. Regarding the refugees, Sommers ignores his own reference to the Iliad a few pages prior, a story about the Greeks’ collective effort to destroy the city of Troy and kill its inhabitants because a Trojan prince had slept with the wife of the King of Sparta.

Secondly, Sommers mischaracterizes the nature of the criticisms of refugee resettlement plans, which are broadly based not on a terrorist threat (although there is good reason to hold such concerns), but upon the sheer logistical, economic, cultural, and social burdens of taking in hundreds of thousands, if not millions, of foreign nationals—most of whom are not refugees at all.

This is not just a pedantic nitpick, but an illustrative demonstration of Sommers’ unfamiliarity with the realities of honor culture. Within honor cultures, there is no worse insult than calling someone a coward. This is a point Sommers himself dwells upon throughout the book. In most cases, such accusations were grounds for combat, “fighting words.” The only reason to call someone a coward for false reasons is to either pick a fight or to shame someone into pariah status. Sommers may genuinely believe that the primary reasons that most people oppose immigration out of fear, but those living in a genuine honor culture know better than to make such accusations lightly, because the cost is high.

Sommers is an “honor tourist,” as he himself frets about on page 10. He understands the mechanisms, but not the reality, of the system he is describing. If he did, he would not have dedicated eight pages (46-54) to immigration, hospitality, and my supposed cowardice. In a more honorable society, such behavior would result in a lawsuit, or with pistols at dawn, because if Sommers were to be considered honorable, then his claims would be deemed trustworthy, and my reputation would be tarnished. If his claims proved to be false, then he would be on the chopping block. Shakespeare demonstrated this with famous rhetorical power in Julius Caesar, when Mark Antony addresses the crowd after Caesar has been killed:

Don’t worry, I have no desire to fight a duel with him, nor am I interested in suing him for slander. However, I would like to see him take “refugees” into his own home. It’s a negligible risk, after all, and what’s the risk to yourself or your family next to your honor?

Inconsistencies and unfamiliarity with the reality of actually living with honor aside, the book does a generally good job of laying out the case for honor. Perhaps the reader can forgive his overly-concerned hedging and occasional poor example if the target audience is kept in mind—the sort of moderate-Left intellectual who is more persuaded by the utility of reducing the number of blacks in prison than by the high intrinsic value of honor. If Why Honor Matters can open a few of those sorts to the idea of caring about reputation, about collective identity rather than personal whim, and maybe even fighting over things that matter, then it may still be among the most valuable pieces of writing to have come out of the academy in a few years.

» An Update on The World in Flames & a Call for Help