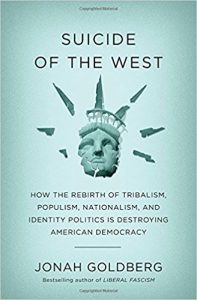 Anyone expecting Jonah Goldberg’s Suicide of the West to be a new meditation on James Burnham’s 1964 classic[1] [2] about the moral degeneracy of liberal democracy is in for a laugh. Having borrowed Burnham’s tasty title, Goldberg goes off in another direction entirely, often inverting Burnham’s argument.

James Burnham thought the ideology of materialism and moral permissiveness was destroying the West’s ability to defend itself and survive. (He was thinking in Cold War terms, but his basic thesis is still applicable today.) Jonah Goldberg thinks egalitarian ideas and amoral acquisitiveness are just swell, and we need to appreciate them more.

Goldberg also tempts the reader with an intriguing subtitle, How the Rebirth of Tribalism, Populism, Nationalism, and Identity Politics is Destroying American Democracy – but never really illustrates this point. The casual book-browser is invited to think Goldberg is going to say something about the New Right, the Alt Right, or maybe White Nationalism. But Goldberg’s theorizing about the origins of identitarianism is just so much tendentious fluff.

The young Muslim men who left Europe and America to go fight for ISIS had every form of entertainment and distraction available to them, but they find it unsatisfying. The same goes for the alienated and numb cadres who swell the ranks of neo-Nazis, antifa, and countless other groups. They crave meaning that our leading institutions no longer feel compelled to provide, or are even capable of providing, at least for those who need it most.

Of course he avoids the question of what these radicalized “young Muslim men” were doing in Europe and America in the first place, and how they came to be there, or why they react as they do. Surely, being transplanted to an alien culture must be disturbing enough. It is an actual, objective situation. There is no need to spin theories about why their lives might be “unsatisfying.” And as for Goldberg’s “neo-Nazis” and “antifa” (presumably he means Western identitarians and their opponents, most of whom do not wear those titles), surely they too have some real-life concerns beyond being bored with videogames.

On occasion he names the Alt Right, without saying much about it other than that it formed part of Trump’s base in 2016. “Consider the emergence of the so-called alt-right,” he writes (implying that there is another, genuine one out there someplace):

The reason to fret about the growth and (relative) popularity of the alt-right is not that its adherents will somehow gain the power to implement their fantasies. No, the reason to be dismayed by them is that these intellectual weeds could find any purchase at all. They should have been buried beneath layers and layers of bedrock-like dogma with no hope of finding air or sunlight. But such is the plight we face. The bedrock is cracked. The soil of our civil society is exhausted, and the roots of our institutions strain to hold what remains in place.

Just as any civilization that was created by ideas can be destroyed by ideas, so can the conservative movement. That is why the cure for what ails us is dogma . . . (pp. 343-344)

Yes, the cure is dogma.

But rather than dismissing this all as something like the babbling of a street-corner crazy, let’s take a little tour of Goldberg’s basic theses.

Basically, Goldberg’s Suicide of the West is a religious tract. He believes in miracles. Or rather, the Miracle. The Miracle is capitalism, which according to Goldberg is responsible for nearly all technological and social advancement in the past three hundred years.

Alas, Goldberg isn’t clear in his own head on what he means by capitalism. In political parlance it often gets confused with the idea of a “free-market economy.” And that free-market ideal is probably what Goldberg mainly intends. You are free to run your lemonade stand where and however you want. The trouble is that, quickly and inevitably, your free-market movement intersects with government power. If your zoning board (controlled by financial interests, perhaps Snapple) doesn’t want you to have a lemonade stand in front of your house, then you don’t have a lemonade stand anymore. You’ve been out-maneuvered. And this truly is capitalism at work. (Goldberg wouldn’t necessarily be fazed by this. He’d tell you it’s okay if you don’t make your five bucks per day at your defunct lemonade stand, because you can buy a bottle of Snapple for two bucks.)

Goldberg wants to equate free markets and free enterprise with capitalism, but they are distinctly different. Capitalism is a political system whereby private economic interests get to control not only their means of production and sales, but the government itself, by means of cartels, political funding, and lobbying. This is how the term was understood a hundred and more years ago, and it is because of such abusive behavior that we had things like the Sherman Anti-Trust Act. It is why Teddy Roosevelt prided himself on being a trust-buster. Theodore Roosevelt did not consider himself “pro-capitalist”; quite the contrary. Nor did most American politicians prior to the 1950s, when, in response to Communist propaganda, some conservatives embraced the term and deliberately confused finance capitalism with the ideal of an efficient, smooth-running market economy. “Conservatives” like Goldberg are now so married to their ideal of “free-market” capitalism that they’ve put old-style conservative values – e.g., social stability, traditional morality – in the wind.

In Goldberg’s world, capitalism, free enterprise, and globalism are all interchangeable concepts; different names for his Miracle, and responsible for the Improved Standard of Living he claims to see throughout the world in recent centuries. If you demur that technology and innovation were really responsible, Goldberg will tell you technology and innovation are merely by-products. They would not have come into being or spread around the world without the capitalist Miracle.

Goldberg presents his thesis in a glib, chirrupy style, like a college freshman debater of several decades back, who came to campus armed with the more practical works of Ayn Rand (Capitalism: The Unknown Ideal). He shows his intellectual prowess by sprinkling his talk with survey-course summaries of Great Thinkers. Two favorites are John Locke, with his Treatises on Government in support of the “Glorious Revolution” of 1688; and Max Weber, of The Protestant Ethic and the Spirit of Capitalism. Goldberg offers those works as seminal capitalistic texts. That point is arguable, but their relevance to Goldberg’s Miracle is hazy. Locke, to Goldberg, is a promoter of religious tolerance and economic freedom, as well as an opponent of royal absolutism in the person of King James II. In reality, it was James who was the apostle of tolerance, specifically for Protestant dissenters, nonconformists, and his fellow Catholics. Such liberality enraged the “tolerant” Locke. Furthermore, James’ “absolutism” was mainly his insistence that the Crown should have supreme authority in restraint of financial manipulators. As a political propagandist for those financial interests, Locke necessarily favored a weak, tractable monarch and a free rein for the money-men. And so the Glorious Revolution was born, with weak, tractable William of Orange supplanting James Stuart and chartering the Bank of England. Even at its birth, capitalism was less a system of economics than a type of government.

As for Max Weber, Goldberg accepts unquestioningly the dubious theory that fatalistic Calvinism invested “Protestantism” (a broad category) with a recondite doctrine or ethos that enabled Protestant businessmen to outperform Catholics. Politics, geography, and quasi-secular organizations probably had at least as much to do with this phenomenon. But since Goldberg is taking us on a magical Miracle tour, an occult belief in a “Protestant Spirit” is as good an explanation as any other.

Overall, Goldberg’s historical vision is pure Whig School of History: We once dwelt in darkness, in poverty and ignorance, our lifespans short, our existences nasty and brutish; helplessly in thrall to absolute monarchs and the obfuscatory mumbo-jumbo of prelates who told us to suffer now and get pie in the sky later. But then we threw off royal pomps and wicked priestcraft, embraced the ballot box and the cash ledger, and moved into the broad, sunlit uplands of progress, freedom, and liberal democracy for all.

Except, Goldberg warns – and this is ostensibly the point of his book – the sunlit uplands are darkening. The Miracle worked so well that we have forgotten it, or no longer believe in it. Or perhaps we see right through it. Anyway, we are moving backwards into tribalism, darkness, and filth.

To give the book quantitative heft, Goldberg includes a long Appendix full of charts and statistics, to prove that we’ve never had it so good. I’ll give just a couple of snippets here, since the examples are tiresomely repetitive:

World per capita GDP rose from $467 in A.D. 1 to a mere $666 in 1820. Deirdre McCloskey estimates that, prior to the Industrial Revolution, pretty much everybody lived on $3 a day. [My comment: But whatever did they buy that cost $3 a day, anyway – that they didn’t make or grow themselves?]

A moment’s thought suggests all sorts of objections to this hallelujah-nonsense. What does one hundred fifty billion dollars even mean for the time of Caesar Augustus, an age when nearly all wealth was in the form of real property (generally inherited) and livestock? This estimate is no more than an economist’s game, like measuring eighteenth-century income in Big Macs. Let’s say John Q. Publius, goatherd, could buy only three new goats per year for his herd in 1 AD; but now, thanks to the Miracle of capitalism, his descendant can buy a thousand goats, thereby providing us with plenty of good, cheap goat meat for our daily lunchbox. Except the descendant probably isn’t raising goats, we’re not slavering over goat meat, and these GDP numbers are essentially meaningless. You cannot translate monetary and intangible values from a long-ago age to the present day.

Inevitably, Goldberg drags out the old saw about how we all live longer lives now. Another triumph of the Miracle! Except that life expectancy really hasn’t risen substantially in recent decades, once you factor out reduced infant mortality, factor in its modern substitute, abortion, and subtract artificial end-of-life support apparatus. Surely, if rising life expectancy were a real thing, we should be living to 140 nowadays, instead of barely surpassing our great-great-grandparents’ three-score-and-ten.

The fact that most people don’t live into their second century probably has a lot to do with why people like Goldberg can push their Progress cult with little fear of contradiction. Offhand, I can think of a dozen ways in which the America of a hundred years ago was a better place than what we have now. Look at school textbooks and graduation requirements, for one thing. (Could today’s average graduate student even pass a standard high school exam from 1918?) For another, look at basic transportation. The hollowed-out communities you see in Upstate New York and elsewhere – once thriving, now practically ghost towns – were served by cheap, reliable, efficient networks of railroads and light-rail tramways that could take you from Saratoga Springs to Schenectady, or Hornell to Meadville, in a half-hour. (Privately-owned transport, too; not that it strictly matters.) People liked their trains and trolleys, but the Miracle of capitalism decreed that we must all buy motorcars instead, and make the automobile and gasoline and insurance companies rich. So the legislators and town fathers were paid off, tracks were ripped up, and nowadays you can’t get there from here.

[1] [4] James Burnham, Suicide of the West: An Essay on the Meaning and Destiny of Liberalism (New York: John Day, 1964). Later editions were published by Regnery and Encounter Books. A good online summary from the Claremont Institute is here [5]