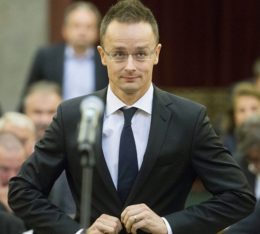 The Visegrád Group, or V4, is a Central European political union representing the Czech Republic, Hungary, Poland, and Slovakia. It has been attracting a great deal of attention in recent years due to its member states’ resistance to the migration policies of the European Union. Some commentators have even suggested that the V4 may in the future represent an illiberal alternative to the EU , as the divide between the conflicting interests of the V4 states and Brussels grows wider. The V4 has a rotating presidency on an annual basis, and it is currently being presided over by Hungary. To mark this occasion, today in Budapest the V4, under the auspices of the Hungarian government, hosted a conference on the topic of “The Future of Europe [2].” The event was highly anticipated in the European media, both by friends and opponents of the V4’s attitude towards immigration. The following report was filed by the Website, Hungary Report [3]. Videos of the conference lectures should be available online soon.

Hungary has a vested interest in a strong and successful Europe, Foreign Minister Péter Szijjártó said at the “Future of Europe” event in Budapest.

According to Szijjarto, the European Union is facing a number of serious challenges today from security questions (migration, terrorism, parallel societies in Western Europe, and the war in Ukraine) to economic crisis, identity crisis, and democracy deficit. The foreign minister names six prerequisites of Europe’s success:

Szijjártó stressed the necessity of “free competition” inside the EU, reminding that Hungary and Central Europe supports workfare societies and their policies based on common sense contributed to the fact that today the CEE region’s growth is above the EU average. Second, Europe must be able to protect itself, to regain control over its borders. Third, Europe must preserve its Christian identity and expect newcomers to respect it. Fourth, he urged a fair debate about the next EU budget. Szijjártó added “European democracy must not be further eroded,” and called for fast enlargement.

Hungarians made a clear decision in the last election, voting for parties that prioritize the security of Hungarians. They want Hungary to remain Hungarian, and the government will represent this view in European talks, he added.

Hungarian-born British author Frank Füredi discussed “populism and European culture wars.” According to Füredi, the “diversity culture” in Europe wants to “denationalize European culture,” because “the only identity you are not allowed to have is national identity.”

British journalist Douglas Murray, author of The Strange Death of Europe [4], discussed the effects of the migration crisis in 2015. According to Murray, one of the fundamental questions we have to ask is whether everyone who wants to make Europe their home can actually settle here. He said that – maybe except for an extremist minority – most people would answer “NO,” which raises the question of who should be let in and who should be prioritized. He rejected the idea of distributing asylum-seekers in Europe based on a quota system.

Gergely Gulyás, head of the Prime Minister’s Office, told the conference that freedom is under threat by globalization and the business interests behind it, resulting in a “stone-hard culture war.” The fight is not between two cultures but the values of the free world standing against “deconstruction,” he added.

Stephen K. Bannon, former campaign chief and chief strategist of US President Donald Trump, said it was a fundamental question of the age whether “we have the courage to protect our civilization from those that want to destroy it.” The Hungarian people answered this question in the April general election by voting in support [5] of Prime Minister Viktor Orbán staying in office, he said.

In his lecture, Bannon explained the reasons behind Trump’s victory, describing the gap between the elites and the working class, the latter of whom wanted a leader who would “make America great again.” According to Bannon, the pro-Clinton elite detested the Trump voters. He said that Trump had stressed the importance of member states’ contribution to the NATO’s budget because he wants real allies, and Europe must be able to defend itself.