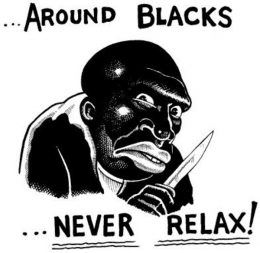 In September 2017 a young black man reportedly stripped naked in the street, barged into the home of his white girlfriend whom he had dated for two years, pulled her outside and repeatedly slammed her head into the ground, killing her [2]. Her family was mightily puzzled; they say he had been a model boyfriend before this anomalous (but conclusive) episode. It didn’t surprise me, however; I read the news. But it did make me think.

Whenever I try to discuss the realities of black violence, I often hear the lazy rejoinder: “white people do that stuff too.” While this is true, context is helpful. White people do murder, rape, and rob. The way in which blacks differ from whites—and this makes a lot of difference—is the manner and the frequency with which they commit these crimes. The stupendously high frequency of black crime is well documented [3]. Let’s look at the manner in which black crime differs from white. In short, blacks often launch into bizarre and ultra-violent modes of violence, patterns that whites imitate rarely, if ever. Amidst this miasma of barbarism some tendencies do indeed recur, and I shall, somewhat grandiosely, call them laws.

I wish hereby to illuminate several ideas: (1) the degree with which the black mentality differs from that of whites, and (2) the nature of the war that the black race is waging against the white in America. Therefore, all that follows is black-on-white mayhem. Blacks differ significantly from whites in practically every measure of behavior [4], but these examples show how stark the difference is in the arena of violent crime and its psychology.

Law number one: if blacks get a white woman under their power, say, during a home invasion or carjacking, they are certain to rape her. This is, of course, apart from all the crimes whose object is specifically to rape white women. There seems to be no situation, however grisly, that prevents a black guy from considering it a good time to pull down his pants and switch to pleasure mode. Terrified, weeping hostages? Dead and mangled bodies in the room, blood-splattered walls? Not a mood-dampener for the black man intent on a good time.

Law number two: no woman is too old to be raped.

Law number three: there is simply no limit to the mindless brutality. Tons of material here.

Law number five: spontaneity. Blacks will attack and kill on the merest of whims, or none at all.

Here’s more spontaneity, or perhaps it’s considered diversity; I do get my SJW terminology mixed up sometimes:

Law number six: blacks like to perform while naked.

So, what is the lesson here? Avoid inner cities? Keep such people at arm’s length [35]? Read John Derbyshire’s “The Talk: Nonblack Version [36]”? I’m kidding (although “The Talk” is actually good). The real lesson is the need for the total separation of the races.

Both races need separation because blacks are sufficiently different from whites (and vice versa, of course) as to exclude peaceable, stable coexistence, especially from the perspective of the races as groups. The episodes above hopefully give a powerful indication of that. These examples also illustrate the bloody front line in the war that blacks are waging on whites, a war that most whites do not even recognize, let alone understand.

Black-on-white crime has amassed some huge numbers since the 1960s. Since the Civil Rights Act of 1964 blacks have murdered roughly 50,000 whites. Blacks sexually assault or rape thousands, probably tens of thousands, of white women every year. In addition, the number of robberies and assaults since the 1960s is in the tens of millions. In just two years, 2012-2013, blacks committed [37] 1,121,200 violent crimes (robbery, assault, murder, rape) against whites. For those concerned about the tsunami of black-on-black crime, the amount of black-on-white crime is virtually the same.

This is war. It is a low-grade, undeclared war, but one nevertheless. No black leader has ever made an official declaration of war upon whites, but a very large number of blacks implicitly understand that they are engaged in a struggle, and seize their opportunity to strike a blow when they can. Conversely, very few whites know the true magnitude of black-on-white crime, let alone the conscious anti-white intentions of blacks. Or perhaps they just won’t admit it, because I guarantee you every white adult experiences fear around groups of young black males after dark. There’s no denying the power of instinct, but the intellect is a much different animal.

Besides the “hot” war of violent crime, there are many other aspects of this conflict.

A telling way to look at the relations between the races is to ask, which one holds psychological dominance? Which one generally intimidates the other? Three generations previous, it was blacks who were intimidated and essentially kept in their place. Blacks faced harsh punishment for transgressions against whites. (I am not saying I want to get back to this; separation is what I want.) Now it is whites who are intimidated and fearful of offending.

A major facet of the race-war is propaganda. Blacks now enjoy many editorial or journalistic positions from which to spread anti-white messages to the nodding masses, amplified by the power of the mainstream media. Blacks also use positions in the important power bases of academia and government agencies—allied with liberal whites—to muzzle, legally coerce, and even physically intimidate whites who resist their program. Blacks successfully police our very speech. Many of us are well aware of this, but does its true dimension really sink in? Think about it: blacks can call down harsh penalties on any white who merely says something they don’t like. This psychological warfare is tending more and more strongly to demonize whites [38], a program that has so often led to further, harsher measures in the past. This program, ironically and hopefully, has the unintended effect of making more and more whites aware of black hostility.

Yes, blacks hold this power largely because of their alliance with Jews, but I want to leave that aside for now.

In waging the war, blacks are conquering territory from whites, an important and natural objective in wartime. They have taken over many of our once-magnificent cities, driving whites out with a range of black pathologies, mainly violent crime. They drove the whites from virtually all of Detroit, and are now moving out into the first ring of white suburbs, a phenomenon seen across the country. (I’ll be damned if they don’t bring with them into these nice white areas that same “lack of jobs/poverty/crime” the whites condemned them to, anomalously, in the inner cities.) Whites are yet again fleeing this invasion, but the overall process is slow enough that it does not take on a warlike aspect in the minds of the victims; it seems like a benign evolution, people simply moving in and out. It is not; it is the conquest of territory.

Our hostile elites force whites to offer up financial tribute to blacks. Wealth-creating whites pay a disproportionate share of taxes [39] and blacks receive a disproportionate share of benefits via welfare payments and grants to black city governments (among other things). Blacks tend to destroy the areas in which they live, including housing, schools, and infrastructure, and then demand the great cargo-cult government provide great sums of money to fix it all. The government complies and sends a big fat check to the utterly corrupt black city governments. I have seen three generations of public housing rise and decay in Detroit, and I never cease to marvel.

Another front in the war is miscegenation. This one is really sensitive because it hits our women, our reproductive potential (not that whites are maximizing this potential), and our biological succession. Blacks increasingly appropriate the childbearing capacity of white women and with it produce their own progeny. This has, of course, a double effect: the birth of one black prevents the birth of one white. In addition, this infuses the gene pool of blacks with a greater capacity for intelligence and energy, making them more dangerous to whites. Miscegenation captures portions of our talent, our war-making capacity, for their side. It’s like a Civil War regiment captured an artillery battery and turned it to their use.

There’s only one definitive way to end this madness, and that is separation. No hatred, no retaliation, no violence needed. We hold ourselves above that. But we must induce a recognition on all sides of the imperative need of separate national homelands (after all, many blacks have called for separation [40] over the years, and black re-segregation is proceeding apace [41], especially in institutions of higher education). The work of Counter-Currents in the sphere of metapolitics is exciting, necessary, and vital. I hope we have enough time left for it to come to fruition. In my mind’s eye I can just see that Nice White Country, shimmering off in the distance.