Nothing New Under the Sun:
A Letter from Francis Parker Yockey 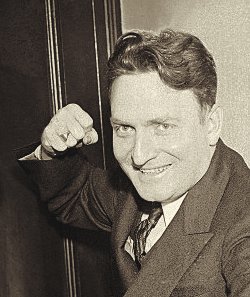 The following is the text of a letter dating from 1950 that Francis Parker Yockey wrote to Adrien Arcand, and is excerpted from Counter-Currents’ imminent publication, The World in Flames, which collects all of Yockey’s extant shorter writings. Arcand was a Québécois Canadian, the leader of the corporatist and Catholic National Unity Party, and a great admirer of Yockey. At the time of writing, Yockey had just been a speaker at the three-day annual convention of Gerald L. K. Smith’s Christian Nationalist Crusade in Los Angeles. Yockey also discusses his encounter with Ernest Elmhurst, a German First World War veteran who had been active among the Coughlinites and the German-American Bund in the 1930s. His main claim to fame had been the writing of The World Hoax, a book on Jewish involvement in Communism which was published by William Dudley Pelley of the Silver Legion in 1938. Yockey also references Don Lohbeck. Lohbeck was originally a classical pianist who joined the America First Committee before finally coming to work with Gerald L. K. Smith full-time in 1944. Lohbeck was Yockey’s primary contact with the Christian Nationalist Crusade.

Anyone who has been observing the American Right in recent years will recognize many of the same problems and patterns of behavior as Yockey amusingly describes here. It seems that for “the movement,” as with everything else, it is most certainly the case that there is nothing new under the Sun.–John Morgan

I have just returned from the Convention in Los Angeles. I see now why you did not feel any urge to go. You had already known, apparently, that which I had to find out—viz. that the movement in this form and under this leadership is devoid of a future. The magazine, the newsletters, the World News Service which Lohbeck and I are founding—these indeed are valuable, but of themselves they are not politics. At most they are useful adjuncts to politics.

I met Smith—in company with his wife and with Lohbeck—and he delivered a speech at the lunch table. He had not read Imperium nor the London “Proclamation,” because, as Lohbeck tells me, he reads nothing. I delivered him a short memorandum I had prepared outlining the offer which I was bringing to him to form a supra-national, supra-continental white Imperialist organization, with him as leader, setting forth the mutual advantages to his organization and to mine. He was to be leader, and was to furnish financial assistance to the Europeans’ organizations for the immediate future until the people come out of hiding and a large enough effort can be made to attract the attention of all Europe in spite of the conspiracy of silence on the part of the press.

This memorandum he did not even care to discuss with me, for reasons unknown to me.

When he introduced me to speak, he washed his hands of me, saying he did not know what I was going to say, he had only just met me, etc. etc. I then gave my speech, and despite the time I delivered it—the morning session, the worst possible time—it was received by the audience very well indeed. To me alone, of some 30 speakers, the audience gave a spontaneous standing ovation. The first part of my speech was on the horrors which America has committed in Europe, how the American flag and uniform have become hateful symbols of Jewry etc. The second part was on the glorious past of the true American type and the necessity for the seizing of America’s destiny by this type. The third part was the mutuality of the cause of the true America and the true Europe, the fight for Liberation from Jewry, democracy, class-war, finance-capitalism, social degeneration, liberalism, and the ethical syphilis of Hollywood. I ended with the call to war against the Jew and his democracy, the refusal to engage in any other war than the war against the Jew, and the demand for unlimited white Imperialism, the natural and organic way of living of the white race, and spirit of the Teutonic Knights and the Vikings, whose descendants we are, and whose spirit we must once more live in.

Immediately after the speech, Smith delivered one of his own, attacking me, and saying that Americans love democracy, that he would not unite with me in my hatred of the Jew, nor in my love for the Western Civilization, but only in the principles of Jesus Christ. Exactly what that means I do not know, but perhaps it was only a way of calling attention to the fact that I had not mentioned Christ. The entire Convention was primarily Christ and Christianity, and secondarily anti-Jewish, mostly on the basis that the Jews are anti-Christ.

Smith also refused to allow me to display the flag of the European Liberation Front, the banner of the sword, even during my speech.

There is one other thing that I must tell you, an unfortunate thing. It concerns Elmhurst. When I met him he was very cordial and friendly and gained my confidence by talking as one European to another about these American goings-on, so different from the stern and serious creative spirit of Europe, the center of the world. We discussed Smith, and Elmhurst was most strong in his statements that he was no follower of Smith, and had always told Smith just that, that Smith was a charlatan, solely interested in money, that Smith was a coward and had retreated to Los Angeles instead of being on the real political fighting fronts—New York, Chicago, etc., that Smith would not be interested in my proposition since it entailed financial assistance, and that Smith would only give anything if he could be assured of a threefold return. These things he said not once, but many times. He went over Lohbeck the same way. He told me that my speech was the only one delivered with any value—and his of course. (By the way, his speech was a discussion of Anglo-German relations for the past generation, and thus could not hold the audience, which constantly diminished.)

Then he went to both Smith and Lohbeck—this was the last day of the Convention—and told them that I was an impostor, that I was not the author of Imperium, that I had said about them all of the things which he had said about them. All of this puzzled Smith, who did not know what to think. Lohbeck of course knows that I am no impostor and am the creator of Imperium, but he did tend to believe that I had criticized him personally. For the time being, this has damaged the relations between Lohbeck and me, which were excellent, and which were beginning to bear fruit. Lohbeck is actually interested in power, and his organization in St. Louis is entering the elections this autumn. He also has a streak of European consciousness in him.

Elmhurst is supposed to be here (St. Louis) next month, and Lohbeck and I shall see him at that time.

As to the explanation for Elmhurst’s conduct, I can only think of suspicion-mania. This is further borne out by the fact that he warned me—and others—against certain other people at the Convention as agents for the enemy. These people, I am convinced, were not agents. Such morbid suspicion could arise in a case like Elmhurst’s, for he has indeed suffered long and hard persecution, and he lives in the environment of New York, where, he says, Jews are constantly trying to poison him. I thought that you should know these things, for the future.

I do not believe Elmhurst did much damage to the relations between Smith and me, since I believe Smith’s attitude did not change, that he is not yet ready for the kind of political thinking that I brought to him, and that, in any event, he is not political. In his beliefs, he is undoubtedly sincere, but in his actions, so to speak, he is not. His person, his family—in every speech he mentions his wife, mother, and father at least ten times—“the clean loins of my father, and the pure womb of my mother who carried me,” etc.—and himself at least thirty times—his security, physical and financial, are of the very highest importance to him. He lacks entirely what we call in Europe the heroic world-outlook. He explained to the audience at one point that he does not live in St. Louis because there was a plot to kill him in St. Louis, and that under these conditions, his mother could not visit him in his home, nor could he enjoy peace and quiet with his wife. One of the strong points which he makes to his audiences is that he and his wife are as happy a couple as could be found in America. In the closing speech of the Convention, he talked for four minutes about his stomach, his digestion, and the fact that he does not need to take laxatives.

If Adolf Hitler and Mussolini had pursued these tactics, they would have both gone to la Suisse and there carried on a mutual admiration society, and put out a radical magazine, raising money all the while from old ladies of both sexes. For all of these reasons, and a hundred others I have not detailed, no movement can be expected in America led by Smith. In his deepest depths, he is not really after that. I have no word to say against his information service, to the extent that it prints and exposes facts not elsewhere to be found.

Nor does any of this apply to Lohbeck, who is a different kind of man, and who has to a large extent come under the influence of Imperium – something that could never be true of Smith, because the intellectual basis is not there. Lohbeck has political ambition, and I have persuaded him to carry his fight in St. Louis onto the streets, leaving the secure halls, where old ladies of both sexes foregather to hear the Jews damned. Street meetings are themselves victories, but a speech in a hall of old ladies, from which the enemy is excluded, is a political nullity. He sees this, Smith never will.

By the way, in Los Angeles, Kurts of New York and I went into Pershing Square (in the center of L.A.) and there spoke of Communism, Jews, and the Korean war). This is possibly the first time that this message was ever heard in that square, hitherto given over to reds and crackpots. Jews and other guks who tried to intervene were silenced by the audience. Guk, by the way, is our new word for anyone who does not belong to the white race and Western Civilization. It is our word corresponding to the Jewish word Gentile or goy—any non-member. It is the word American soldiers use to designate all Koreans, north and south. Gannon will introduce the word in England, and it must enter all languages.

This has been a long letter. I hope none of it has been superfluous. Let me close with an expression of my highest esteem and my