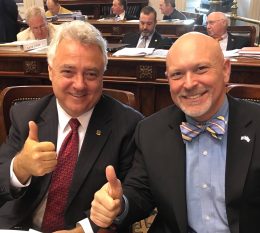 The bill adopted the language that is already in use by the US State Department to define anti-Semitism. The proviso was attached to the Commission on Higher Education section, in Part 1B Section 11 H030 [2] of the bill, and reads as follows:

This is not the first legislation related to anti-Semitism to pass the South Carolina legislature. In 2015, the same body passed a bill which made it illegal for state institutions to do business with companies that are boycotting Israel as part of the Boycott, Divest, and Sanctions (BDS) movement that seeks to punish Israel for its treatment of the Palestinians, although in this it is hardly unique, given that 24 states have thus far passed similar legislation. And one should not forget that only last summer, 43 members of Congress voiced support for a bill aimed at criminalizing the BDS movement on a federal level [3].

Also last year, the residents of Dickinson, Texas were offered the opportunity to request funds from the city government for repairs and reconstruction in the wake of Hurricane Harvey, only to discover a clause in the agreements which required that they certify that they would not participate in any boycott of Israel [4] in order to receive the funds.

And even more importantly, Senators Tim Scott and Bob Casey proposed nearly identical legislation to South Carolina’s at the national level when they proposed the Anti-Semitism Awareness Act [5] for the Department of Education in 2016.

Some Counter-Currents readers might be tempted to attribute this trend to Jewish influence. But while there are certainly Jewish advocacy groups who have called for and celebrated South Carolina’s move, in surveying the news reports, it seems that there are just as many who oppose it. Likewise, representatives of South Carolina’s educational institutions have spoken of their concern over how this could affect their campuses’ welcoming of free speech (although they are quick to add that they condemn any form of “bigotry”). Some Jewish academics who oppose the legislation and are critical of Israel themselves say that they dislike the implication that being Jewish and being pro-Israel are one and the same. Professor Barry Trachtenberg, the Director of the Jewish Studies program at Wake Forest University in North Carolina, even said that the law was more likely to exacerbate anti-Semitism [6] than to dampen it – which seems to be a reasonable assumption.

And indeed, the bill’s champion, State Representative Alan Clemmons, is both a Republican and a Mormon. He seems to have made it his cause to be more pro-Jewish than most Jews are. A vocal critic of the BDS movement, last year he even went so far as to attack the pro-Israel J Street PAC [7] for being anti-Semitic on the grounds that it opposes Israel’s occupation of the West Bank – something that was almost universally condemned by Jewish groups from all points of the spectrum. As for the current bill, he claims that he introduced it [8] due to the recent rise in anti-Semitism across the United States, and specifically in response to bomb threats that were made in early 2017 against Jewish institutions in South Carolina. (Apparently, Clemmons didn’t get the news [9] that many of these bomb threats were in fact made by an Israeli Jew.) And just this week, Clemmons took advantage of a photo op by flying to Tel Aviv to step over the bodies of Palestinian children to be present at the opening of the new American embassy there, alongside Jared and Ivanka.

But the larger issue here is the continuing rise of neoliberal totalitarianism in America. The last year has seen an unprecedented rise in public outcry over “hate speech” in the United States, leading to the attempted suppression of some Right-wing forums that I don’t need to detail here. This, coupled with the recent study which found that forty percent of millennials are fine with limiting free speech that is offensive to minorities, is indicative of a worrying trend. Legislation that attempts to set Jews up on a pedestal is only part of the larger phenomenon targeting any speech or activities that question the multiculturalist, globalist paradigm, which views America as nothing more than the harbinger of the colorless, soulless world to come that is said to be inevitable, where we will become nothing but a Third World plantation. Indeed, in neoliberalism, nothing is true and everything is permitted – except, of course, to question the neoliberal paradigm itself. And it is quite obvious that, should legislation such as this “proviso” ever be enacted in a broader sense, sites like Counter-Currents, the Institute for Historical Review [10], and The Occidental Observer [11] will quickly become history. And erased even from history, most likely.