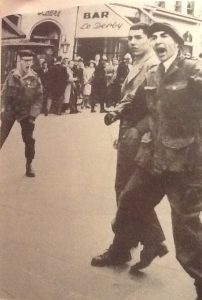 A young Dominique Venner, at a protest against Algerian independence in paratrooper uniform, is on the left.

The following article was published in French on the Fragments sur les Temps Présents [2] Website on May 23, 2018 to commemorate the fifth anniversary of Dominique Venner [3]‘s public suicide [4]. Jean-Yves Camus is a sociologist who specializes in the Right. It was translated by Jason Rogers.

Five years later, while the memory of this activist still haunts the ranks of the radical Right, this erroneous representation has not, unfortunately, been corrected in the major media outlets.

This historian and writer had been in all the battles of the extreme Right of the 1950s and ‘60s, describing his ideal as that of a “military and mystical order.” He then stopped being active in groups that, according to him, were devoted to a sterile activism, wearing their defeats like decorations. Before becoming one of the figures of the “New Right,” with whom he shared a belief in ethnopluralism, paganism, and elitism, Venner developed his own ideology.

He was independent of political party and clan. The motivations behind his decision to commit suicide were, like all suicides, personal, and thus a certain restraint is required in commenting on it. That said, we can say unequivocally that his reasons are almost incomprehensible to those who do not share his way of thinking. His remarks on “facing death,” published in 2011 in a book of interviews titled The Shock of History, appear to come from another universe to anyone who is not intellectually Right-wing.

His suicide demonstrates firstly a realm of ethics concerning honor and life like that of the ancient Romans and Greeks, who wanted to choose their own death. This is consistent with his paganism: a pagan does not believe in “another world.” His life is here and now, his destiny does not lie in the hands of some master, but is determined by his choice alone. It is an act within the scope of politics, and it plays out as follows: “I believe it necessary to sacrifice myself to break the lethargy that plagues us.”

One misunderstands his suicide by believing that the social “lethargy” he saw was limited to the vote on same-sex marriage. Like most of his political camp, he was persuaded that this law fell within the broader context of the programmed destruction, which he viewed as being already largely achieved, of European civilization by “globalism.”

For him, the imminent end of civilization was primarily the result of what he called “the crime of replacing our people” – that is to say, the structural and definitive changing, “forced” according to him, of the ethnic French and European substrate through immigration and miscegenation.

He certainly supported the French Spring,[2] [6] while distinguishing between the two components within it: one which was Catholic, conservative, and bourgeois – of which he expected nothing – and one which was “identitarian” and which he hoped to see surge ahead. The place that he chose to kill himself, a cathedral, was surprising coming from a man who made no secret of his rejection of monotheist religions.

But his choice was consistent: for him, as for many militants of his ilk, Catholicism is not so much a matter of faith but of culture and churches which are the expression of the European genius. This is what Christine Boutin did not understand, when she expressed her hope that Venner had converted at the last hour.

Some elected officials on the Right agree with some of the deceased man’s ideas. When the announcement of his suicide was made, they took to the floor. Thierry Mariani[3] [7] evoked a man who “had convictions and a true idea of France,” and Hervé Mariton[4] [8] admitted that there were “some points on which he could agree” with him. But they reduced Dominique Venner to nothing more than an order-loving nationalist and an opponent of same-sex marriage, while the heart of his commitment was to an ethno-cultural vision of Europe and identity. When Marine Le Pen reacted by speaking of his “eminently political” gesture made to “try to awaken the people of France,” this was in fact very much connected to the idea of population “replacement,” even if the discourse of the Front National, seeking to “become more mainstream” in 2013 as in 2018, no longer talks about immigration in these terms.

A whole fringe of the political and intellectual elite rests on this issue, both in what is suggested and in what is left unsaid. But until when?

[1] [9] The Organisation de l’Armée Secrète, or Secret Army Organization, was an underground French Right-wing paramilitary group which sought to prevent Algeria from becoming independent at the end of the Algerian War. Venner was jailed for 18 months for his membership.

[3] [11] A politician with the center-Right party, Les Républicains.