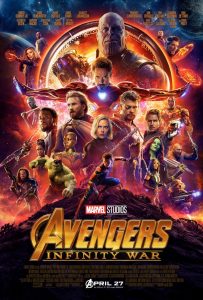 Infinity War is a “gargantuan” film that has surpassed being a mere movie and become a cinema “event.” It is the latest in the trilogy of Avengers movies, and apparently nineteenth in Marvel’s “Cinematic Universe.” Having seen only Iron Man and Guardians of the Galaxy 2, I watched this fanboy-specific orgasmatron with unbiased eyes and little clue what was happening. It’s big, it’s gnarly, it has Thor, the Hulk, and all your favorite (or not so favorite) characters, but is it any good?

Yes and no. It gets off to a difficult start, with the sheer volume of explosions and hand-to-hand combat making the plot impossible to follow. Newcomers to the franchise will be completely lost as cyborgs (Tony Stark’s Iron Man, and a robotic crusader named Vision) confront aliens with an array of pointy sticks, Benedict Cumberbatch is a wizard and uses magical powers to stop dust storms, and so on. The film chops between constant action and ‘witty’ dialogue as various super-dupes try to out banter each other, all the while bickering about the best way to prevent the coming apocalypse and obligatory end-of-the-universe (it’s always the universe, and never anywhere more local, to make it a diverse and globally appealing cataclysm). The sharp comebacks and humor fall flat, as the tone of the exposition is just so morose.

The film trundles through its first hour managing to be both a constant barrage of action and yet intensely dreary, and this is just the set up for the remaining two. There’s little to relate to on-screen and no normality to anchor the Avengers as “super” or even “heroes.” They’re already established as the good guys, so precious little screen time (actually, none at all) is devoted to the people of earth they are in the business of saving. Bruce Banner even has a Hulk Impotency problem after getting beaten up by an alien (I suppose one of the writers thought this was funny).

The villain Thanos, it is explained, has a gauntlet forged by space dwarves that is powered by magical MacGuffins from the dawn of the universe. If he gets all the MacGuffins, then he will be able to wipe out half of every species, based on some crude Malthusian logic. The Avengers (and the Guardians of the Galaxy, who are along for the ride to broaden appeal) have to stop him. It’s not an especially deep plot, but it has the merit of making sense, and in this sprawling, cosmos-trotting adventure, things that make simple sense are good to hold onto as the abundance of stuff happening devolves into a tangled mess.

The movie gives way to Keep it Simple Stupid tactics by having a character tell the audience which planet they are going to, then showing them the planet in a panning landscape shot, and then telling them the name of the planet again in giant serif letters. If I were a struggling language student, I would be glad of Avengers screenwriters helping me learn the solar system. Should the film have kept its original, gloomy tone of imminent doom it would be nearly unbearable, but luckily Chris Pratt and the Guardians lighten the mood, and the Avengers and assorted Good Guys begin to blend as a jibey team the viewer can relate to and root for.

Every cynical element of the films construction is lampshaded: Spider-Man asks Iron Man if he ever saw an “old science fiction movie called Alien?” — a much better, more tightly scripted and cohesive movie, with a definite beginning, middle, and end. Avengers: Infinity War has a beginning that (as far as I can discern) started several films ago, and an end that is set in a future film. What viewers are paying to see is a particularly explodey segment of a long-running scifi cartoon serial, a sort of season premiere, if you will. It marks the final convergence of the Marvel Cinematic Universe into a gloopy, miscgenated mess with the DNA of several different franchises being twisted together into an undifferentiated mishmash. With it comes the diminishment of any kind of depth or substance. The most well-trod character is Thanos, the villain, by necessity and virtue of having the most screen time; everyone else is present to either punch aliens (Hulk, Thor, Iron Man, Black Panther), punch Thanos (Spider-Man, Star Lord, Iron Man again), or provide a MacGuffin to move the plot from Backdrop A to Backdrop B (Gamora, Vision, Dr. Strange).

The standout comedy comes from the Guardians of the Galaxy and Thor, with Rocket, Star Lord, and a serious space dwarf playing the foil to the goofs of Thor, Drax, and Mantis, Tony Stark’s banter and the more strait-laced heroes take a back seat as the more cartoonish Guardians come to the fore. The humor shifts from aggressive barbs to the comedy of the brave and mistaken, with Thor inquiring “Will I die?” after being told such and such will kill him, and Mantis exclaiming that they are there to “Chew ass and kick names.”

The film’s emotional pivot is an abduction/adoption father/daughter relationship between Gamora and Thanos, whereby throwing her down a well he proves himself truly a nasty piece of work, and the anticipated casualties start to stack up, giving all the CGI explosions some gravitas. Thanos’s motivations are so incredibly vulgar and unsubtle that it’s almost plebian, and the film seems to be looking down its nose at anyone who has Linkola-type concerns about the sustainability of global capitalism and unchecked population growth. He talks at length about having the Will to Do Something, and it’s all very Ubermenschy; only unlike the Joker’s Ubermenschery of seeking to awaken Gothamites to the superficiality of their virtue, Thanos’s Ubermenschery is about punching enough people in the face to undo resource scarcity.

In the final showdown the slate is wiped clean in an incredibly drastic and radical mass-hero die-off.  After nearly three hours of constant punching and explosions, the deaths of characters that have survived the preceding 19 films is a shock only in its audacity; they simply dissolve into thin air with little drama (aside from the already-memed “Mr. Stark, I don’t feel so good” from the innocent Spidey). All that talk about resurrection earlier on in the movie suddenly begins to make sense. The only questions are whether fans will buy this cynical ploy and pay for the next release to see whether their favored characters make it, and whether Marvels’ writers will be able to rewind time without it being painfully contrived and predictable.

No-one in this movie is a real role model, even though plenty of them are likable, and the settings and scenarios border on the absurd. The final conflict has Wakandans — yes, there is a monumental battle set in the rolling hills of Wakanda — facing off against four-armed aliens with lots of teeth, whilst Iron-Man’s buddy flies around dropping American napalm and showing off his United States military insignia, because the USA is Awesome and Israel’s enemies are monsters. But by the end of it, I was enjoying it for the spectacle; a big, stupid, overpriced assortment of CGI set pieces and manufactured conflicts, inhabited by lost but well-meaning characters. Even the villain means well and gets somewhere, despite being the most hated man in the cosmos; and if we have the Will to Do Something then we’ll get somewhere too, no matter how many antifa comic book fans want to punch us in the face.