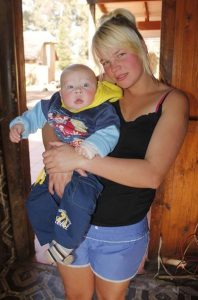 Irene van Niekerk, an Afrikaner who has won numerous gold medals as a runner, is one of many South African whites who live in squatter camps, and for whom the government does little.

Some years ago, before “Alt Right” became a household term, there was a meme going around, usually found in comments sections of news articles and such, that “anti-racism is code for anti-white.” The meme became repetitive, but resonated because of the wealth of unspoken truth it contained. After all, if one performs even a cursory search of the facts with regards to racial crime statistics, the pros and cons associated with being of a certain race, or even the general manner in which so-called “anti-racist” groups target whitey for trying to attain the same rights to self-preservation and self-determination that are taken for granted by other races, then one would realize that something is not right. There is a double standard.

The problem with the meme was that most people couldn’t even be bothered doing such a cursory search. They’re too apathetic to look into why groups such as the SPLC or the ADL are seeking to destroy the lives of white advocates while supporting groups like La Raza or the NAACP. Likewise, as long as someone wasn’t himself a victim, black-on-white crime statistics were something that could be ignored. After all, there didn’t seem to be any intentional effort by the government to implement any kind of policy to eliminate whites. The government didn’t pay blacks to rape or kill whites. It was all a matter of circumstance that could be avoided as long as one had the means to move to a nicer suburb.

Fortunately for us, this worldview is fracturing.

In February, South Africa’s parliament, dominated by the African National Congress (ANC), passed a law put forth by the black supremacist Economic Freedom Fighters (EFF) to confiscate land from whites without compensation. To the informed observer, this was an obvious attempt to scapegoat the Afrikaner for the failings of the black ANC government, which has over the last twenty-four years run the country into the ground, socially and economically. What was once the safest and most advanced country in Africa is now a crime-ridden, HIV-plagued tinpot republic. Murders and rapes have increased dramatically, while power outages and now even water shortages threaten to plunge the country into chaos.

Many of us dreaded the moment the Boer would be officially made a pariah in South Africa. But I must admit that I also saw in these events an opportunity. With such blatant anti-white persecution sanctioned by the government, it would be impossible for the world not to react. Someone would have to say something, for these events would be impossible for the entire international community to ignore.

I was not disappointed. In mid-March, Australian Home Affairs Minister Peter Dutton contended that white South Africans deserve “special attention” due to the horrific circumstances that they are facing at home and suggested fast-tracking refugee status visas for Afrikaners wishing to flee. Mr. Dutton’s comments came from a purely humanitarian angle, as opposed to an identitarian one, all the while noting that white South African immigrants could make a positive contribution to Australia:

People do need help and they need help from a civilized country like ours. The people we’re talking about want to work hard, they want to contribute to a country like Australia. We want people who want to come here, abide by our laws, integrate into our society, work hard, not lead a life on welfare. And I think these people deserve special attention and we’re certainly applying that special attention now.

Naturally, claiming that one group integrates better than another is a big no-no in the current year. However, short of mentioning the root cause of why certain groups integrate better than others, Dutton made a solid case for allowing Afrikaners into Australia on humanitarian grounds.

Dutton wasn’t the only politician to offer support to the Boers. He was supported by other Senators and Members of Parliament, including former Prime Minister Tony Abbot. Former One Nation and current Independent Senator Fraser Anning also agreed, going so far as to speak at a rally for white South Africans which had an attendance of over a thousand people. Judging by the videos and photos, the participants were overwhelmingly white. Not only did Anning pull no punches when he described what is happening as a genocide, but he also referred to the people (who are, of course, blacks) who commit the atrocious farm murders as “subhumans,” to loud cheers and applause. Here we have statements that deserve the hashtag #brave.

However, humanitarianism does not mean anything to the Left when it comes to offering a helping hand to whites. The vile anti-white hate that is endemic to the Left wasted no time in rearing its ugly head. The aging and childless Minister of Foreign Affairs, Julie Bishop, immediately denounced the plan, saying that “I believe the humanitarian program’s credibility comes from the fact that it is non-discriminatory and that each application is assessed on its merits.” Fair enough, but if we are allowing people into the country based on merit, then why the hell do we allow in black Sudanese migrants who are massively over-represented in violent crime and unemployment?

Greens leader Richard Di Natale, a vile insect who wants to allow ISIS fighters back into the country, reacted in an even less reasonable manner, whining that “there’s no debate as far as I’m concerned, the bloke is an out-and-out racist.” Well, there you go. Wanting to help people who are being murdered in the most sadistic ways and who face having their land outright stolen by the government makes you a racist. He furthermore added, “According to Peter Dutton, if you’re a white South African farmer, you are going to make a great contribution, you’re not going to bludge on welfare. But if you’re not white, you won’t do any of those things.” I’m actually really glad that terrorist sympathizer Di Natale is saying this, because with all the news about African gangs in Melbourne, people are going to hear these comments and think, “Well . . . where’s the lie?”

Jason Wilson of The Guardian also pitched in, bemoaning that the “myth” of white genocide started on the far Right, as if it were something that was made up on the forums of Stormfront with no basis in reality. Speaking of the Change.org petition to admit Afrikaners into the United States as refugees, he claimed that “it offers lurid but non-specific stories of whites being killed in the most sadistic ways imaginable.” It asks that they be prioritized over people from the Middle East. South African whites, it says, are threatened with “complete genocide” and are “compatible with our culture and civilization.” Interestingly, Wilson never seems to dispute any of these claims. The whole point of the article seems to be “Seeee? Peter Dutton has the same views as those Nazis over there at Amren and Vdare!” There is a complete lack of empathy for the very real suffering of the Boers and a sick sense of self-righteousness in denouncing white identity politics for the sole purpose of denouncing white identity politics.

The rank-and-file Lefties are hardly any better. “Based Jew” Avi Yemeni went to a pro-refugee rally to ask people if they would be willing to let in white South Africans and received mostly hysterical responses from aging Leftists. One old hag said that they shouldn’t be allowed in because “they had their own country” and that they “stole the land anyway” (which is completely false, by the way, as there were virtually no black tribes on that land when whites first settled South Africa). When our yarmulke-wearing friend explains that they will integrate more easily because they speak our language and have a similar culture, the woman simply responds with, “That’s racist.” When she is told that it would be racist to not offer them asylum, the old harridan simply denies that there is such a thing as “reverse racism.” That’s right, crackers! Even when you’re literally being systematically killed, you still can’t experience racism! Racism = power plus privilege, and everyone knows that whites have all the power. Sure, the South African government is more or less entirely controlled by blacks, but you just know that there’s some white pulling the strings somewhere.

Another woman flatly denied that Afrikaners were facing extermination. The other responses all have basically the same level of intellectual and moral integrity. They rationalize their way out of having to help fellow human beings in need purely because of their race . . . and that of the perpetrators. I dare say that none of these people complained when any other group of brown or black people were given special consideration for refugee status. (Professional Right-wing troll Simon Burgess has similar videos on his Facebook page that have received equally weak responses.)

So basically, we were right all along. The Left doesn’t just really like brown and black people. They also hate whites. And while there are differing views as to why this is so, ranging from Jewish media control to a managerial elite who fears the anti-authoritarian mentality that is inherent in European man, I dare say that the reason why they hate us isn’t as important as the fact that they do hate us, and seem less and less concerned with hiding it. So what do we do?

Rule 4 of Alinky’s rules for radicals is to always make the enemy live up to their own book of rules. The Leftists claim to be against racism. They say, or at least they used to until recently, that they are colorblind and want to help those in need. We should therefore endeavor at every opportunity to expose this rank anti-white hypocrisy and use it against them like a hammer. Those on the Left who are honest and conscientious will be forced to look inwards and think about what it is they are really fighting for. It is these people who are most likely to leave the Left and, in the best cases, even join us. The rest, the most die-hard and militant Leftists such as those who form the ranks of the antifa, will continue to push on and will be exposed as the cowardly, hate-filled psychopaths that they are.

Either way, it’s a win for us. We are reaching a point where some kind of white identity politics is actually acceptable, if not yet fully socially respectable. I never thought I’d live to see the day that there would be a major pro-white rally in Australia, a country which has shown little resistance to being colonized by China and the Third World. And the scum on the Left can continue to throw around their worn-out buzzwords – but it won’t work. When accusations of racism are all they have in response to humanitarian efforts to save lives, you know they are digging themselves into a hole which they won’t be able to get out of.

» At Midnight, a Pumpkin