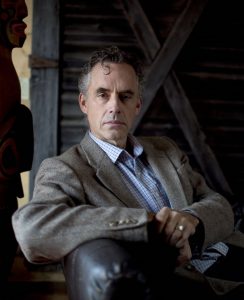 I like Dr. Jordan Peterson. I have watched almost all of his YouTube videos, and listened to many of his interviews. I even have a ticket to one of his upcoming events.  He explains complex religious and psychological concepts in a way that is intellectually satisfying. Often these are truths that I believed but could not explain how or why. His explorations of Carl Jung and ancient literature—closely paralleling the work of Joseph Campbell—make reading more enjoyable and exciting. He helps make learning easier for students. There is no higher praise I can think of to offer a professor.

His prominence, however, does not make him infallible. In his applications of ancient archetypal truths to modern contexts—a difficult task for even the wisest among us—Peterson has mischaracterized the arguments for White Nationalism, and collective identity in general. It is a fairly typical criticism of collective identity, and so it is worth looking at a demonstrative quotation with a magnifying glass.

In one recent instance [2], Dr. Peterson was presented with the following quote from Dr. Ricardo Duchesne:

Individualism is a unique attribute of European peoples. It has been exported to some degree to other nations, but in my view, it is not something that comes to them naturally. So you can’t play the game of ‘we’re all individuals.’ We have to affirm and be proud of our ethnic identity and heritage to preserve the West’s curious individualism.

In response to Duchesne, Peterson had the following to say:

Look, the Medieval Europeans identified seven deadly sins for a reason. And one of them was “pride.” I do believe that for a variety of reasons that aren’t obvious, the West has got some things right. We’ve got the sovereignty of the individual right. That’s the most fundamental thing we’ve got right. We’ve articulated that in a remarkable way, not only theologically, philosophically, in our body of laws, in our societies, and one of the consequences of that as it’s had its effect on the rest of the world is that everyone is getting richer quite fast. And that’s a really good thing.

Okay, having said that, am I proud of that? I didn’t do that. What the hell. Pride: what’s that? That’s not the right response. How about responsibility for that, how would that be? You’re part of this great and unlikely set of propositions, this strange set of propositions that says that in some ineffable manner, the poorest person is as valuable as the king. How the hell did we figure that out? It’s an impossible thing to think, and yet that’s the bedrock of our legal system.

That’s nothing to be proud of, it’s something to tremble before, to take on as an ethical burden, and not to wave a flag for how wonderful you are that you happen to have the same skin color as some of the people who thought that up. It’s not the right response.

Peterson concludes by characterizing right-wingers as essentially pointing their fingers at the cumulative accomplishments of Western Civilization, especially of the cities of Europe and saying: “Look what we’ve done.” “No,” he says, “it’s not you who did that.”

Pride is, indeed, a Christian sin, but are all expressions of “pride” inherently sinful? If not, is Duchesne guilty of advocating the sinful variety? Peterson himself was clear-sighted enough to distinguish between the superficially similar words “meekness [3]” and “weakness,” on the question of how the meek could inherit the earth. Perhaps a distinction needs to be made between “pride” generally and its sinful varieties.

Consider the following example: A father watches his son perform well at school or in a sports game, or when he stands up for himself. Afterwards, the father tells his son “I’m proud of you.”

Is this a sin? As Jordan Peterson noted, the father was not responsible for his son’s actions: the son performed them, not him. But the father is not claiming responsibility for the son’s actions. Something else entirely is going on. What the father is expressing when he says “I’m proud of you” is a sense of shared identity. It says something like “the actions you performed make me proud to be related to you.” It is an expression of appreciation, and simultaneously an acknowledgment of a being on the same team.

By extension, it is conceivable to imagine how a father might even be proud of his son’s teammate’s play, despite that teammate not being his own child. This is possible because the boys are on the same team, and are representatives of that team. It would not be conceivable, however, for the father to be “proud” of the opposing team’s children. He might be impressed, but not proud.

“Pride” in this sense is a sense of joy derived from association, and an act of deepening association. It is not necessarily a claim to credit or responsibility for accomplishments.

This does not mean that we can’t derive pride from association with ourselves. By this, I mean crediting our past selves with our present success: ‘I’ did this. Perhaps you scored very well on a test, after your past self studied very hard, or perhaps you won the big game for your team after your past self put in hundreds of hours of practice.

This brings up a philosophical problem however. Heraclitus once said that a man cannot step into the same river twice, for it is not the same river and he is not the same man. But identity is a matter of sameness, and it is not practical to endlessly differentiate between categories to the point that action becomes impossible. The logic of rejecting pride on the grounds that “we didn’t build that” would apply to the individual even when you did build that, because an individual human being is not actually a coherent entity. We simply say that he is the same person for the sake of simplicity and pragmatism.

So we take pride in our own actions, because the relationship between our former self and our present self is sufficient to justify a sense of ownership.

What about the relationship between father and son? What about grandfather and grandson? Or even between two team members? Their relationship is deeper than the happenstance of sharing the same complexion, or last name. There are lineages of genetics, experience, and traditions interwoven together that constitute a heritage that we are given by previous generations and that we bestow upon subsequent ones. These lineages form a coherent identity that we can take on as a mantle or a mask, and which grants us partial ownership in the collective outcome. If my team wins, and I played well, then I have a right to be proud of my team, even though I did not win it alone. If United States Marines won a hard victory in unlikely odds, and if I went through the rigorous training of becoming a US Marine, then I actually have a right to take pride in the accomplishments of Marines of the past . . . not as myself, but as the identity which I have earned: a Marine.

If I participate in my civilization, then I have some small right to take pride in its accomplishments as a member of that team, even if some of those accomplishments were made before I joined.

Needless to say, this can be taken too far, but the possibility of abuse is no reason to dismiss every manifestation of rightly taking responsibility for a success in which we played some role.

But this misses the greater argument that Duchesne is making. A father feeling pride in his son is not primarily taking credit for his son’s actions; it is a deep, emotional acknowledgment of the bond shared between the two. It establishes a mutuality of care between them, building a foundation for why each should care about the opinion of the other (which is also the necessary ground for feeling ashamed of one another). It builds the honor group by attributing honor to another within your group, or by claiming honor before others within the group.

This is a pride of conjoining the individual to the group. In theological terms, this is the marriage of the individual to the church. Pride of this sort is not only not a sin, but is the building block of humility and godliness, which may ultimately lead to healthy and earned self-respect. It is a pride that identifies with others, including your ancestors whose expectations you hope to live up to, and with your descendants whom you might impress or embarrass. Rejecting this sort of pride—the sort which identifies with others—is the rejection of the external, social pressures that help check our weaknesses and improve upon our strengths.

This is not to say that Peterson is absolutely wrong, however. There is a sin of pride, but it is not the sin of identifying too heavily with others.

Borrowed from the ancient Greek crime of hubris—arrogance in the face of the Gods—the sin of pride is the sin of Lucifer, who sought to be worshipped as a god himself. In its essence, it is the sin of thinking that you are good enough on your own, that you don’t need a god or other people. Perhaps you think you are God. Perhaps you believe you are better than everyone else, or perhaps you simply cannot stand to be dependent upon others, even if they are better. Your pride won’t allow it.

But this is not even remotely similar to Duchesne’s injunction to “affirm and be proud of our ethnic identity and heritage.” In its mechanics, it is very nearly a polar opposite. Morally speaking, the two senses of “pride” are polar opposites.

Even Tim McGraw [4] seems to think this is intuitively clear, when he sings “let yourself feel the pride but always stay humble and kind.”

It would be simplistic to dismiss all forms of individualism as hubristic, as we have inherited a tradition from our ancestors and law-givers of the past which values individualism. But it should be remembered that sinful pride is not an excess in group-think, but the exact opposite. Hubris is a sin of excessive individualism. Even excessive pride in one’s group is a sin of projecting one’s own delusional, hubristic ego onto the group as a whole. It is not taking pride in one’s ancestry but being proud of yourself.

Peterson was actually spot on in his description of how we ought to relate to the traditions that we inherit—with awe, humility, and a sense of duty, so that we might earn the gift that has already been given to us. But he is wrong to reject pride in, and identification with, this wonderful inheritance. Ultimately, the traditions of the West—including its individualism—can only be saved by claiming ownership and responsibility for them, that is to say, affirming and taking pride in our ethnic identity and heritage. Elsewhere, Peterson describes this as taking on the sins of the world, and it is the fantastic weight of this purpose and meaning that makes enduring the suffering of being worthwhile. The world is as it is because people like me have made it so. That is an enormous burden, and is nothing to gloat about, but is a work to identify with and to take pride in.

Otherwise it won’t get done.

There is defensible ground in both Duchesne’s and Peterson’s position, but there is none in Peterson’s interpretation of Duchesne. While excessive group-think may lead to laziness—or “sloth”—it is not in any danger at all of the sin of pride. Between the two, it is Peterson’s heavily emphasized individualism that holds the greatest potential for hubris, and with it, swift-following nemesis. In our case, that will most likely be Islam, or the Chinese, or some other collective-minded nation whose group-splintering, house-dividing intellectuals are not allowed to shatter the shared spirit of their own nation.