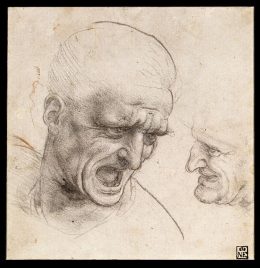 Leonardo da Vinci, Study of Two Warriors’ Heads for the Battle of Anghiari

This is the text of my talk from the first Awakening Conference, which was held in Helsinki on April 8, 2018. The topic I was asked to speak on was the European fighting spirit. As usual, I improvised a bit and departed from my prepared text. I wish to thank the organizers of the Awakening Conference, the approximately 200 people who attended the meeting, and the Counter-Currents reader whose gift made this trip possible.

“Sing, O goddess, the destructive wrath of Achilles, son of Peleus, which wrought countless woes upon the Greeks, and hurled many valiant souls of heroes down to Hades, and made them prey for dogs and birds . . .” So opens Homer’s Illiad, the first book of the West. Achilles was the mightiest warrior among the Achaeans. His fighting spirit, however, turned to destructive wrath when he was dishonored by Agamemnon.

Will the end of the West begin with the words “Refugees Welcome” on signs held up by soy-drinking, cuck-mouthed hipsters wrapped in huge scarves, man-purses dangling from their spindly arms, as they stand in train stations frantically signaling their submission to the Koran of globalism and multiculturalism?

Not if we can help it. 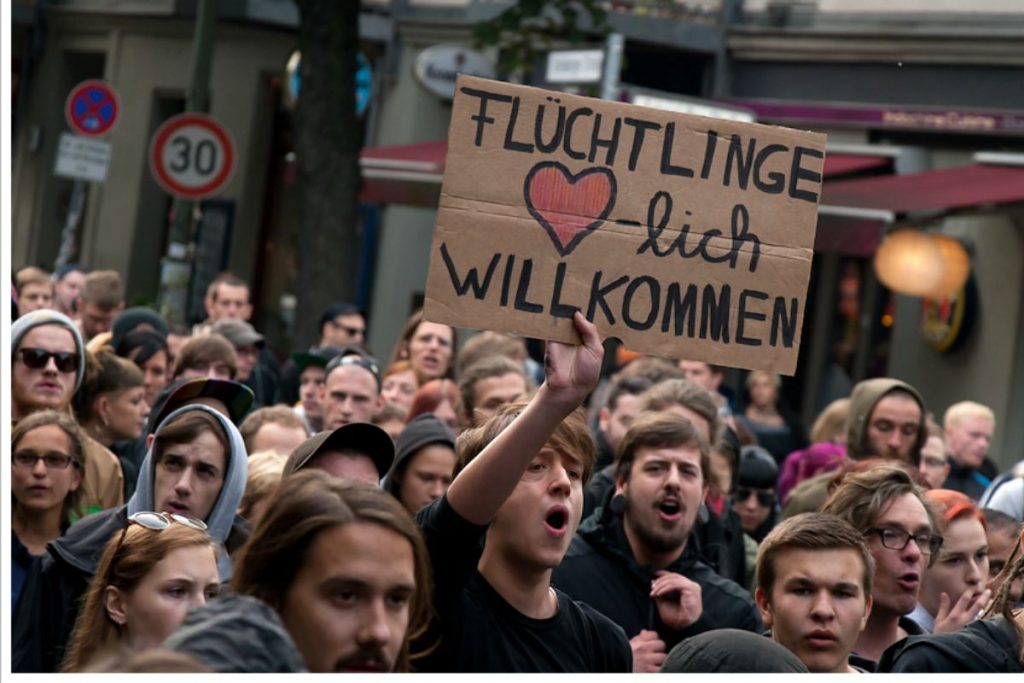 The manly role as warrior is not merely a social construct. It is rooted in biology. Men are biologically more inclined to fight. We are more aggressive. We have a fighting spirit, which is associated with the hormone testosterone. Men are also more physically capable of fighting. And from a reproductive point of view, men are more expendable for the survival of the tribe. (A man can be a father far more times than a woman can be a mother, so a society can afford to lose far more men in a war than women.) Thus it is perfectly logical that the globalists who wish to erase distinct nations and tribes and create a unified and homogenized world have also declared war on manliness by stigmatizing it and promoting feminism, androgyny, and confusion about sexual roles and identity. 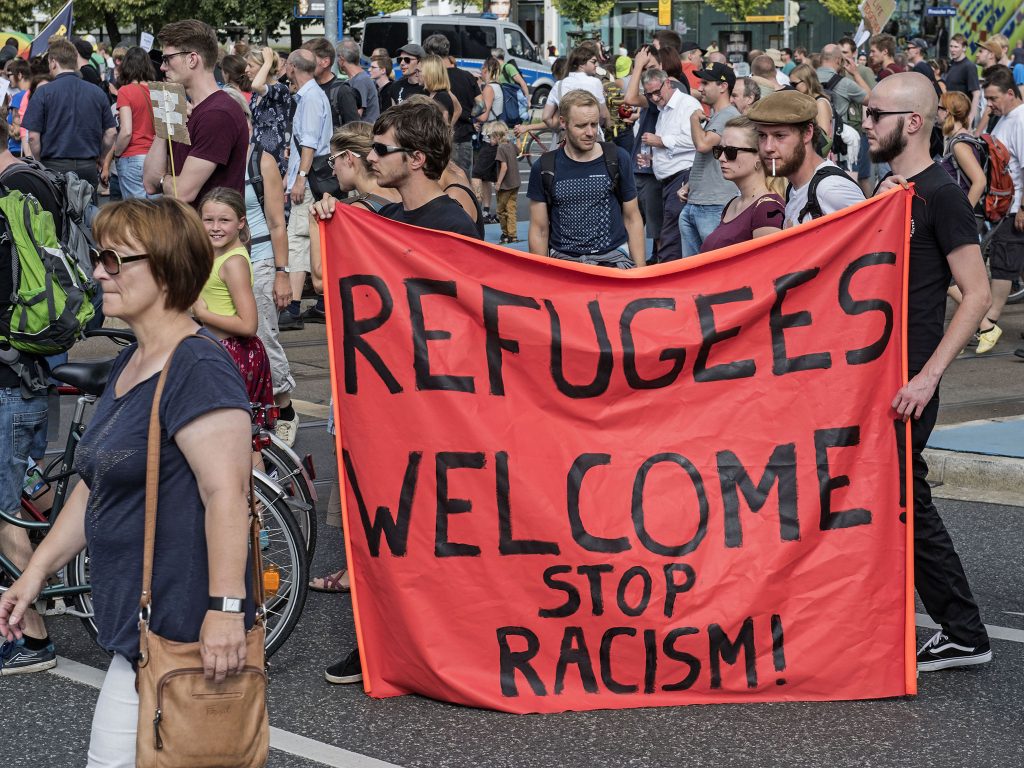 In recent years there have been alarming reports about the declining fertility and virility of white men and East Asians living in advanced industrial societies. These declines are measured in lowered testosterone and sperm counts. Various dietary and environmental causes have been proposed for this trend. But not all poisons are chemical. Mind and body have complex and reciprocal relationships. Thus it should not surprise us that the relentless psychological war against masculinity might take a physical toll as well.

The ideological war against manliness is far older than most of us think. It begins with the modern world itself. Understanding its deepest roots will light the way to a solution.

Like most narratives in the history of ideas, this one begins with Plato. In The Republic, Socrates divides the human soul into three parts. There is reason — the faculty of thought — associated with the head. There is also desire — which seeks the necessities of life, serving the instinct for self-preservation. Desire is associated with the belly and points below.

We are all familiar with reason and desire. But how many of us have heard of Plato’s third part of the soul? This is called thumos, and it is usually translated as “spirit.” But it is not spirit in an immaterial sense, like a ghost. Instead, it is quite physical. It is team spirit or fighting spirit. Plato locates it in the chest, where we feel anger, where we feel pride.

For Plato, thumos is a passionate love of one’s own: one’s own honor, one’s own family, one’s own tribe. Thumos is always partial, particular, tribal. For Plato and Aristotle — and later Carl Schmitt — thumos is the foundation of politics, which always involves partisanship, the distinction between us and them. Women have thumos too, but thumos is especially connected with manliness, because it is men who fight on the front lines for honor, family, and tribe.

Plato claimed that if there are three parts of the soul, there are three basic kinds of men depending on which part of the soul rules: reason, spirit, or desire. It is possible for there to be conflicts between the different parts of the soul. For instance, your desire might be prompting you to drink too much, but your reason might say “no.” Your desire for self-preservation might prompt you to shrink from a fight, but your sense of pride might say no. Your sense of pride might be spoiling for a confrontation, but your reason might veto it because it is strategically sounder to retreat. The part of the soul that tends to win out in such conflicts is the dominant one, and it determines your basic character. 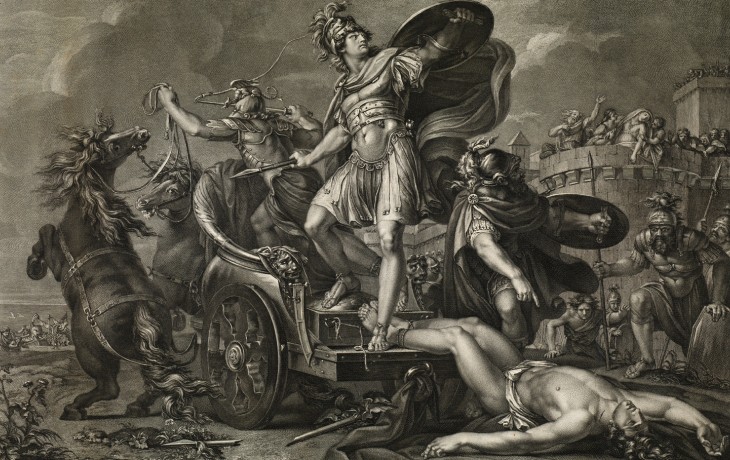 The great German idealist philosopher Hegel argued that thumos is the driving force of history. For Hegel, the beginning of history is a duel to the death over honor. Those who put honor above life itself are ruled by spirit. Those who are willing to suffer dishonor to preserve their lives are ruled by desire. The man who puts death before dishonor is free. The man who prefers dishonor to death is a natural slave.

For Hegel, history begins when human beings subordinate life and desire to the higher parts of the soul: reason, imagination, spirit. Desire is an instinct for self-preservation. Thumos is an instinct for self-transcendence, even self-sacrifice. Desire seeks the necessities of life. Reason and thumos open up the realm of the non-necessary: of luxury, of the beautiful and useless things that constitute the realm of culture. Of course culture is only “useless” from the point of view of desire. But it has higher uses: It is the medium by which reason and spirit, the distinctly human parts of the soul, express and understand themselves.

Human history is a record of striving for truth and glory. It cannot be understood in purely materialistic terms. And yet most of us today have never heard of thumos. We don’t really know what honor and patriotism mean. We aren’t comfortable with love of one’s own — with preferences for our family, tribe, nation, and race. The idea of self-sacrifice seems like an insane form of fanaticism. We are not the same people who fought duels over honor and raised up monuments to heroes. What has happened to us?

To answer this question, we need to understand the origins of modern liberalism. Plato taught that the city is the soul writ large. Just as an individual can be ruled by reason, spirit, or desire, a society can be ruled by men who follow reason, spirit, or desire. The ultimate foundation of any  political constitution is the moral constitution of the people. Thus to preserve itself, a regime needs to put its stamp on the character of the citizens, and when the character of the citizenry changes, regime change is not far behind.

Before the rise of liberalism, Europe was ruled by an alliance of Throne and Altar. For aristocrats, honor is the highest good. And although Christianity is not exactly a rational worldview, it is a system of ideas that subordinated desire and thumos to its imperatives. The founders of liberalism understood that to overthrow the order of society, they first had to overthrow the order of the soul: to cast down the sovereignty of reason and thumos and replace them with the sovereignty of desire.

Reason was demoted from a power that can legislate or create values and turned into a technical-instrumental faculty for satisfying desire. As Thomas Hobbes said, reason is to the passions as “scouts and spies” in service to a general. As David Hume said, “reason is and always ought to be a slave of the passions.”

Thumos was dismissed by Hobbes as mere “pride and vainglory.” The purpose of liberalism, according to John Locke, was to secure the “industrious and rational” (those who use reason to satisfy their desires) from the interference of the “contentious and quarrelsome” (those who take ideas and honor seriously).

The result of this rewiring of the soul was the rise of modern bourgeois man, for whom material wealth, personal security, and a long life trump all matters of principle and patriotism. In 2016, America had a hard-fought presidential election in which the central issue was whether preserving the national identity was more important than cheap goods and services. The good guys won by a razor-thin margin. But it is clear that many Americans will not sacrifice a few dollars to save their nation, much less sacrifice their lives.

From an aristocratic point of view, bourgeois man is a natural slave. He will suffer any dishonor as long as he can keep his pension and credit rating. He would rather drop dead on the golf course than die on the field of honor.

Our current rulers are counting on this. Our ethnic displacement depends upon it.

What is the place of manliness in modern bourgeois society? It cannot be abolished altogether. Indeed, the oligarchs will sometimes appeal to it when they need to fight a war. So manliness must be managed. The struggle for honor can be channeled into economic competition, sportsball fandom, and the pursuit of material status symbols.

But for the most part, manliness must simply be suppressed. We are not taught the words we need to understand honor and its role in civilization. The quest for honor is pathologized as “ego” and “narcissism.” Spirited boys are diagnosed with ADHD and put on drugs. As C. S. Lewis observed, the modern bourgeoisie are “men without chests.” Or, to put it more colorfully, men without balls. There’s an empty space where honor and manliness used to reside.

How do we reawaken the European fighting spirit? The first step is to understand what has been taken away from us. Plato’s psychology has far more truth and explanatory power than anything offered by Freud or Jung. Once we have recovered the concept of thumos and the language of honor, we will understand that we can be more than clever producer-consumers, natural slaves in the Skinner box economy. We can also be warriors and idealists, people who are willing to fight and die over matters of honor, principle, and patriotism. To be free, you actually need to know what your options are. Now you know that you have a choice. There is surely no shortage of thumos in Finland, the land of Black Metal, and if you are in this room today, I have no doubt about what kind of men you will choose to be.

Just go to our Maker Support page and become a patron: https://www.makersupport.com/gregjohnson