Living within a Myth 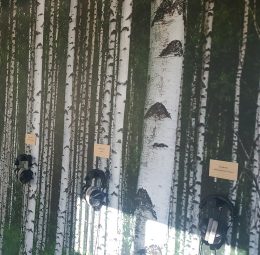 This is the text of Ruuben Kaalep’s talk from the first Awakening Conference, which was held in Helsinki on April 8, 2018.

Our ancestors knew that we live within a myth. This myth has not ended with the passing of our ancestors; this myth never ended. Deep inside we know the magic that is our people, our nation, our tribe, our race, our culture, our ethnos. What we are is magical, because all our folk songs, legends, mythology, all the mysteries about our ancestors point to something. They all point to someplace where we come from and where we will return. Awakening is understanding that we never left this place. The national awakening, this spring that Europe is beginning to experience, that Estonia is experiencing, that Finland will experience, this national awakening that we live to bring about is magic itself, it is myth itself.

When modern man becomes interested in spirituality, he constantly needs a confirmation that this world is not all there is. He can never be present, for he lacks attachment; he is in this world but not of this world. We overcome this. Through an ethnic consciousness, we become attached to the world; we can experience being in a far deeper, timeless plane of existence.

For a true nationalist the nation is always more than a sum of its people. Nationalism is inherently an essentialistic perspective. For us the nation is an essence in itself. Therefore, our vision of the future Europe is not to be built of just people – it will be built of ethnic spirits. We are against all forms of materialism. Nation for us is transcendent. Ethnic spirit is the ultimate political authority.

And this is why true nationalism must be Right-wing in the true, philosophical meaning of the term – it must recognize a hierarchy; it must recognize an elite. It is often and especially in the current era of liberal, globalist hegemony that the ethnic spirit is best represented by a small vanguard. Who are to form this esoteric nationalist elite?

The esoteric vanguard is never formed by politicians, never those who have become brilliant mimickers and replicants of the merchant class, those who do not speak their hearts and minds. They do not speak their hearts and minds because they don’t want to be “racists” or “nazis” or “anti-semites.” They have agreed that all of these things are bad. But when they throw away all of those things, they also throw away all love and duty and honor and even adventure, all those things that lead us to this struggle. For without them this struggle does not exist.

I asked a new person who wanted to join our movement in Estonia why is he against immigration.

“Migrants bring instability, they bring conflict, they are bad for the economy.” – Is this your only argument?

“Well the Islamic migrants bring attack vans and Sharia law and everything.” – Is this still your only argument?

“Look, I have rape statistics, crime records, look at all the numbers.” – So I ask are you even a nationalist?

“Why, of course I am, I oppose immigration, you see.” – Then what about hard-working Japanese migrants? No terrorism, no Sharia law, no rape gangs, higher than average IQ? Your arguments are not the reason you oppose immigration, you see. So what about the fact that the migrants just aren’t European? That they aren’t us? How’s that for an argument?

You see, this liberal paradigm works to make us uncomfortable about who we are, to feel bad about admitting ethnonationalism, even though we don’t notice it. This ideology that is foreign to us has created such a noise in many people’s heads. You feel like you have to cling to rationality and thought, when nationalism is just about being. Being itself. Who we are? You are not this or that ideology. No sticker is authentic like your blood and spirit are. Even nationalism is just a term that expresses devotion to it. This noise in the head does not bring a nation together; it separates the nation by class and taste and subculture. But the nation is brought together in the very point where your ancestors and descendants meet. This point is physically and spiritually within you. Awaken to that.

What you belong to is your home; this is home in its original meaning. If you have a strong connection to a place, your village, your farm where your ancestors lived, your house that your grandfather built, or maybe a place of your childhood memories, it is easy to find. You may give great importance to the rational mind, but somehow when you get to that place, when you get to meet your ancestors and truly see yourself from a different perspective, you will be empty; you won’t even see yourself as an individual. That is timeless ethnic consciousness.

The vanguard of our movements everywhere in Europe has that consciousness. We have overcome time, for both our ancestors and our descendants live within us. This is a cultural vanguard that has to accomplish a national awakening of Europeans. And we will enter politics not because we want to become politicians, but because politics needs people who are not politicians. And this is the main reason we will be extremely successful in the next decades.

The future is ethnic, because the human species is tribal. And we will be part of the global ethnofuture. Our fate is to start a new Spenglerian cycle, a new European civilization, which might of course be slightly less civilized and slightly more barbaric than the previous one. To plant its seeds is our fate, and I don’t even think it’s a fate we can choose. Our ancestors and descendants will make us save our nations, even if we didn’t want to.

I can never take this degenerate Western civilization seriously or lament its downfall because as an Estonian – and the same goes about Finns – the spirit of my people was never part of this West. We never lost our connection with nature, with our land, with our mythology. Western Europeans lost it a long time ago. They went outside the forest, they became afraid of the forest, they escaped to the cities. We will bring them back.

We are the forces of future. We will not stop the flow of history; our aim is not to return to an earlier point in time. Not to be standing with defiance on hopeless positions, as Spengler said, but to be the storm that is about to come. To bring about the great ethnofuture.

The emergence of a new, 21st-century form of ethnonationalism has been facilitated by the failure of the Western Right to reverse the destruction of their peoples within the paradigm of the aging Western civilization. The remaining forces of the civilization rooted in the Roman Empire, the medieval and Enlightenment eras are firmly working for the globalist agenda. Western civilization itself will not produce an awakening to our true ethnic consciousness. That is left for something more archaic and more juvenile at the same time.

In the new Europe that will be based on the ethnic, man will be of nature as much and even more than man is in nature. For when you have roots, and the roots give you wings, you will look around and you see the whole, the organic unity of extended integral nationalism that unites your people, your land and all forms of life that belong to your land. It is incomprehensible for us how modern man can claim to feel close to a human of the same species from the far side of the planet but apart from an animal or tree from his own home forest.

Our ancestors, who certainly had both roots and wings, certainly felt a stronger connection with life around them than with humans thousands of miles away. In spirit and in the sense of belonging, we are far closer to our dogs and brown bears and flying squirrels — and we can even be better friends with trees — than Africans or South Americans. From this perspective, humanity has not much meaning. Homeland is everything.

Saving Europe is on our shoulders. And there is really one way it can be done – the anti-globalist, pro-ethnic part of Europe has to be consolidated in order to stand against all threats our nations face, and to launch the spring of ethnofuturism into every European country. This part extends from the Baltic to the Black Sea, and we call it Intermarium.

It is important to understand that Intermarium is far more than just a geopolitical project, and obviously it is not just an economic project. The esoteric current behind this idea is aimed at a rebirth of Europe. The rebirth of Europe free from the paradigm of the previous civilization, in the sense that its materialistic emphasis on thought and form will be replaced by an authentic essence. And this essence will be found in Finno-Ugric as well as Baltic, Slavic, and Germanic ancestral connection with our tribes and our soil. The nationalists from the Baltics or Ukraine or Poland or Hungary, who speak of the Intermarium, see this as a world-historical project with a clear objective: bringing about the makings of a new civilization.

There is one thing above all others that we must aim for when we are dreaming of the future Europe that will be born from our actions. The future Europe must be based on the ethnic. The ethnic dimension must be the most essential thing in the new Europe, the one dimension that commands all others. All our struggle comes down to this – our ethnic survival, and the primacy of the ethnic question because we know it is meaningful, and everything our enemies do is aimed at extinguishing its meaning.

The European nations are alive; they are alive where their spirit is alive. The spirit of Finland is alive, and we know it from the dedication of the organizers of this conference. If you have a nation of millions with just a thousand dedicated nationalists, then the spirit of the nation is exactly where those one thousand are. They, in a sense, are the nation. The nation lives with those who are already awakened.

What, then, is future Europe? It is essentially a collection of our ethnic spirits. Because through ethnic spirit we sense the home where we belong. Through this we sense Being itself. The ethnic spirit for us is the pinnacle of our experience of the Universe. And by this we have overcome the bounds of materialism.

Every day we are moving closer to a total resurrection of nationalism. Every day our ideas spread, our groups and movements grow, our structure is getting stronger. And every day our enemies grow more desperate, and they become more laughable as they sense their time is running out. Their world is breaking up. And there will rise a future forged from our ancient spirits. We here today are already part of this future.

» Video of the Day
Being, Place, & Living Authentically