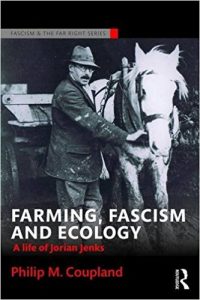 The connections between the organic movement and the radical Right are often overlooked. To the chagrin of liberal environmentalists, the early organic movement had close links to both fascism and National Socialism. Among the leading pioneers of organic farming was Jorian Jenks, a high-ranking member of the British Union of Fascists who served as the party’s agricultural advisor. Farming, Fascism and Ecology is the first biography of Jenks to appear in print. It is an amply researched and surprisingly even-handed study that details Jenks’s oft-neglected influence on the organic movement and sheds light on the long-standing ties between environmentalism and the far-Right.[1]

Born in Oxford to upwardly mobile, Left-leaning parents, his father a prominent academic and his mother the daughter of a merchant, Jenks was an unlikely candidate to become either a farmer or a fascist. Having wanted to be a farmer from early childhood, he enrolled at Harper Adams Agricultural College in 1916. He spent his early career working on land restoration projects and serving as a government farming instructor in New Zealand. He later studied at Oxford and received a B.Litt. for his thesis on land settlement policy in Australia and New Zealand.

Jenks subsequently moved to Ecclesden Farm in Angmering, West Sussex, where he worked the land along with a handful of other men. The six years he spent as a farmer at Ecclesden effected a significant change in his worldview. In his earlier years, Jenks had advocated factory farming and the use of artificial fertilizers; at Ecclesden, he came to champion family-owned, medium-sized farms over large factory farms, mixed farming over monoculture, and animal labor over machinery.

Jenks often returned to the theme that monoculture, despite its superficial advantages, depletes the soil of its nutrients and fertility in the long run, causing soil erosion and necessitating the use of chemical fertilizers that in turn bring about further ecological destruction. He also defended animal labor on the practical grounds that it was cheaper, in some cases more efficient, and caused less soil compaction (though he did endorse cars, grass-drying machines, and even, in some cases, the tractor).

Ultimately, however, his primary objections to factory farms and the widespread use of machinery were more philosophical than practical: “Farming is one of the few industries in which Man is not yet dominated by the Machine, in which the small producer still has a chance to preserve his independence. It is in the national interest that it should remain so” (p. 74). He did not wholeheartedly condemn the use of farm machinery but believed that it ought to be subordinate to physical labor and not vice versa. Coupland comments that, in this regard, Jenks may have been influenced by Arthur Penty, a writer on guild socialism and distributism who advocated for a return to handicraft as the basis of production.

Indeed, Jenks’s interest in Social Credit and related movements was what eventually led him to fascism. Jenks likely joined the BUF in early 1934. Coupland proposes that Jenks was the author of an article published anonymously in The Blackshirt in 1935 entitled “Why I, A Farmer, Have Turned Fascist” in which the author describes his reasons for joining the BUF: “Their aims and objects were to me the very thing the country needed: a straightforward constructive policy of national regeneration, with ‘Britain First’ as its watch-word. . . . I have become more and more convinced that the Fascist agricultural policy is the only one which will put us on our feet again” (p. 87).

Written under the pseudonym “Vergilius” (a tribute to the celebrated farmer-poet), his articles in the fascist newspaper Action were his most notable contribution to British fascism. He later also published a collection of his poetry, most of which deals with agricultural themes, under this pseudonym.

In 1936, Jenks left his anonymity behind and ran as the BUF candidate for Horsham and Worthing as a prospective MP. As a close friend of Oswald Mosley, whom he likened to William Cobbett, he was appointed the temporary leader of the BUF after Mosley was detained under Defence Regulation 18B in 1939. But Jenks was also detained and withdrew from political life following his release in 1941.

Jenks criticized interwar British agricultural policy on the grounds that agriculture had become a mere speculative commodity whose production had fallen into the hands of financiers who prized cheap food and low wages over the health of the soil and the people. He pushed for Britain to minimize foreign food imports and overseas investment in order to raise the per-capita home production of food and achieve agricultural autarky and national self-sufficiency.

He also wrote on food and nutrition, arguing that the decline in food standards was a symptom of the decline of Western civilization in general and that returning to a diet of homegrown, unprocessed food would boost both individual health and national morale.

Jenks’s policy proposals included the establishment of institutions such as an Agricultural Land Bank that would provide an alternative to debt incurred by farmers who had previously purchased land on mortgage, an Agricultural Corporation that would set prices of commodities in order to ensure economic stability in the agricultural sector, a Central Land Commission that would stabilize land values and rents, and a Voluntary Land Army that would confiscate and restore land from any landowner shown to have misused it. The state would supervise agricultural production overall, but these institutions would be organized on a county basis with leaders elected at the local level. The objective of these large-scale national directives would not be the “centralised micro-management of farming, but the creation of ‘conditions under which the industry can adequately fulfil its function as the main source of food for the people'” (p. 98). These proposals never came to fruition, though his ideas did have some impact on post-war British agricultural policy.

In 1937, ill health and financial difficulties forced Jenks to abandon farming, and he devoted the rest of his life to writing and lecturing. He had become a successful agricultural journalist by this point, writing for The Manchester Guardian, The Observer, and The Yorkshire Post, as well as for fascist journals, and had written books outlining his proposals for monetary reform (Farming and Money) and the agricultural policy of the BUF (The Land and the People).

His best-known work, Spring Comes Again, was published in 1939 and details his political worldview. His most notable argument here is that what he termed the “Plutocratic State,” wherein money and finance reign supreme, represents the inevitable culmination of modern liberalism. He reiterates this theme in From the Ground Up: An Outline of Real Economy, published in 1950, in which he attacks modern materialism and liberal capitalism and contrasts them with the ideal of the organic society.

Jenks was critical of both international capitalism and Communism, which he described as “attempts to subordinate the peoples to the dictates of a super-State, to break down the natural claims of patriotism and racial brotherhood, and to substitute for them the rule of some soulless materialistic deity” (102). He associated both with Jews, whom he amusingly likened to rabbits. Despite appearing soft and defenseless, rabbits wreak havoc on crops in Australia and New Zealand, where they are an invasive species. He was a bit more charitable to Jews than to rabbits, though, and believed that they could gain dignity as a race through “contact with the soil.”

After the war, Jenks became the editor of the journals of both the Soil Association (an organization that later became known for developing the first organic certification system) and the Rural Reconstruction Association. He moved away from active political involvement and did not join Mosley’s Union Movement, but nonetheless retained his fascist sympathies. In order to address the food shortages brought on by the war, he authored a pamphlet along with the two founders of the agricultural branch of the Union Movement entitled None Need Starve, which laid out a plan for increased agricultural production. He was also a member of Kinship in Husbandry, a group somewhat akin to the Soil Association founded by Rolf Gardiner, Viscount Lymington (Gerald Wallop), and H. J. Massingham. There was some overlap between the organic movement and the post-war fascist movement. Gardiner and Lymington were both sympathetic to fascism. It is also worth noting that the two journals edited by Jenks counted Walther Darré (Minister of Food and Agriculture under Hitler) and his aide Hermann Reischle among their subscribers. After the war, Jenks also became involved with the Council for the Church and Countryside, as he believed that the Church could play a role in agricultural revival by emphasizing the spiritual bond between man and soil. (The word “cultivation,” as he pointed out, derives from the Latin colere, meaning both “to till” and “to worship.”) His final book, The Stuff Man’s Made Of: The Positive Approach to Health through Nutrition, was published in 1959.

This biography makes it clear that Jenks’s fascist convictions were a natural extension of his commitment to the organic movement. Any serious and honest environmentalist will be left wondering whether it is really the Right, and not the Left, that offers the most pertinent solutions to the ecological quandaries posed by liberal modernity.

1. The term “organic farming” itself was coined by Lord Northbourne in his 1940 book, Look to the Land, and comes from his concept of the “farm as organism,” or what he described as “the farm as a living whole.” Northbourne happens to have been a translator of René Guénon’s works and might have also been a member of the BUF.