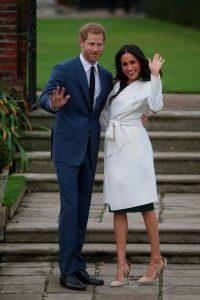 There is something about a royal wedding which tugs at the heartstrings of this old Brit. I’m too young to remember the wedding of the Queen, but the pageantry of Diana’s brought tears to my eyes while, sadly, the wedding of Prince Harry to his divorcee only brings to mind Richard Kelly Hoskins’ Vigilantes of Christendom, an obscure book on the perils of interracial marriage.

Hoskins is descended from old-stock Virginians who survived both the Indian Wars and Negro emancipation. He is also an old-style biblical literate horrified at the ongoing adulteration of his race. His thinking is in alignment with Strong’s Concordance, which defines man as anyone showing blood in the face. Anyone else is a stranger. Strong’s interpretation may have been the general consensus in revolutionary America, when the Declaration of Independence was written, for even while in rebellion against the motherland, the American colonials recognized the British enemy as our British brethren, although they had little good to say about the Red Indians, who were described as the merciless Indian savages.

Hoskins taught that race-mixing would boomerang back on society as God used the mulattoes to destroy Christians when they turned their backs on him. Hoskins gave the example of Santa Domingo, where in 1789 a wealthy group of mulattoes spearheaded the genocide of the whites. Although the mulattoes owned a third of the land and a quarter of the slaves, they preferred the company of their own kind. Another example he cited was the Mexican revolution of 1910,[1] [2] in which the whites were slaughtered.

The vague feeling lingers that the British throne is supposed to be the symbol of all that is best in British life, and that there are enough Americans of British stock from which to choose a wife. Prince Harry is a product of his time more than he is a child of royal breeding. His grandmother is the supreme leader of the Church of England, a title bequeathed on her by the Act of Supremacy of 1534 and 1558. One of the primary duties of the national Church was to protect the sanctity of the family, and it was successful at this until recent times.

Edward VIII abdicated not because he was to marry an American, but because she was a divorcee. The Queen’s sister, Princess Margaret, was forbidden to marry Group Captain Townsend because he, too, was divorced, and in 1992 the divorced Princess Anne had to travel to Scotland to be married by the liberal Church of Scotland. In the intervening years a change of attitude crept in, and on February 11, 2018, the Palace announced that Prince Harry would marry his divorcee in St. George’s chapel, and that “[t]he Dean of Windsor will conduct the service and the Archbishop of Canterbury will officiate as the couple make their vows.” The dark forces [3] the Queen warned Diana’s butler about seem to have had their evil way with both the throne and the Church.

The Queen’s personal life is exemplary, but in matters of state, in which admittedly a constitutional monarch cannot involve herself, one can perfectly understand why Andrew Fraser would refer to her as “Elizabeth the Useless.”[2] [4] Roy Taylor of the Christian Identity subculture is more understanding, and through his interpretation [5] of the song “Miss American Pie” shows how the Church was stolen long before Elizabeth ascended the throne.

The prevailing opinion of constitutional experts is that there is no question of the Queen not passing a bill which has been passed by both Houses of Parliament. In 1990, King Baudouin of Belgium let it be known that he would not sign into law a bill for abortion. He was declared unfit to rule for a day while the bill was passed, and then the following day he was declared fit to rule again. In 2007, the Grand Duke of Luxembourg actually withheld Royal Assent on a bill regarding euthanasia, and as a result his royal powers were removed, although he was allowed to remain as head of state. No doubt the same fate would befall the British throne if it dared speak out on behalf of the British people. The only duty left to the throne is to be a symbol of British greatness – but Harry is hell-bent on destroying even that.

Hoskins is convinced that the Bible is a manuscript for racial and national survival, and that anyone who would marry a stranger, as he regards aliens, is a renegade worthy of death. His reasoning may seem quaint in our post-Christian age, but Prince Harry’s grandmother not only sits on the throne, but is the supreme head of the Church of England, and one day his brother William will sit on that very same throne. The future King will have a mulatto for his sister-in-law. Hoskins thinks that a man married to a colored woman is untrue to himself and therefore is likely to be untrue to the rest of human society.[3] [6] Prince Harry in his high office won’t be a benefit to the people he is supposed to serve and of which he is a product. But whether one regards Hoskins’ attitude as quaint or not, “[t]he British Monarchy and the Anglican Church are the last living links to the archetypical forms of Anglo-Saxon bioculture.”[4] [7]

Hoskins’ attitude toward racial preservation reflects the ancient morals of the West, which had reigned for centuries. “The feeling against miscegenation was present from the earliest times, and it was shared by both the Government and the Church.”[5] [8] Hoskins avoided the trap of thinking that a whites-only country would automatically be a paradise, since he also believed that the law required the execution of murderers and rapists “so that they wouldn’t reproduce and mix with the congregation, thereby in time making the rest like themselves. Failure to execute judgment develops a population that is descended from lawless people. Lawless people commit lawless acts.”[6] [9] Hoskins believed that God made the different races, and in our case, for a thousand generations we have not allowed the criminal element amongst us to reproduce, whereas other races have developed theft and murder as a way of life. For someone to marry out of his race is to bring a thousand generations of lawlessness into our nation. Like breeds like.[7] [10]

The seeds of destruction were planted in America virtually at its birth when in 1619 a Dutch ship offloaded twenty black slaves in Jamestown. Black strangers were being brought in through the back door while Americans were fighting Red savages at the front door on the frontier.[8] [11] Quoting Bancroft’s History of the United States, Volume Five, Hoskins recounted how the colonial legislature passed laws prohibiting the importation of Negroes from Africa, but as George III was indebted to the moneylenders, he needed the money the slaves brought, and overruled any attempts to stop the practice.

Lothrop Stoddard, in his book The French Revolution in San Domingo, believed that slavery was an evil institution detrimental both to slave and master. Not only the slaves suffered but, as Kevin MacDonald put it, “controlling the slaves therefore required a sort of sociopathy on the part of whites.”[9] [12] Stoddard described the whites of San Domingo as shady characters and opportunists out to make money without any moral scruples, and worse yet, “They are not a people but only a mass of individuals.”[10] [13] Hoskins was keen that the whites in America would be a people, and for this reason was an enthusiastic supporter of biblical law to mold the nation, which he believed would allow America to avoid the fate of San Domingo, now better-known as Haiti.

Hoskins wrote that “even the emasculated KJV [King James Bible] which appeared in 1605 was reprinted in 1825 leaving out 14 more books called the Apocalypse.”[11] [14] The reformers’ Geneva Bible was rewritten by removing the margin notes, and the last true Catholic Bible was the Reims Bible of 1633. Today, most Bibles that are printed and distributed contain only the New Testament, so that Christians are no longer familiar with those scriptures that were known by Jesus two thousand years ago. Hoskins was quite keen that his fellow American patriots would be familiar with these “missing” books, and especially Maccabees, which instructs the reader on the art of resistance to an occupying power.

The original Vigilante was the Israelite Phineas, whose story appeared in Numbers 25:6-13. The short version appears in Psalms 106:30, “Then stood up Phineas and executed judgment: and so the plague was stayed,”[12] [15] but before Phineas could kill the man of Israel, Zimri, who was copulating with the stranger Cosbi, twenty-four thousand Israelite men died in the plague.[13] [16] The story of Israel in Palestine and abroad has always been that if the laws are followed, all is well and the land prospers. If lawless rulers and lawless judges mock God’s law and refuse to enforce it, God punishes the land with pestilence and plague.[14] [17] One can only speculate about the plagues of allergies, cardiovascular disease, diabetes, and the endless STDs haunting us today.

Old-fashioned as Hoskins’ take on scripture is, the real tragedy of Prince Harry’s marriage to a stranger is that it takes away the Britishness of our highest and most cherished symbol of all that is good and great in the British race at home and abroad. Equally tragic is that the Church has neglected to teach the boy his duties to his God and his nation. The changing attitude of the Church to divorce is one example of why Harry would not take anything it says as gospel. His own family was also seen to waver on the principle of divorce. Prince Harry was eight years old in 1992, when his divorced aunt had to travel to Scotland to be married. In 2005, his divorced father, Prince Charles, had to marry the Duchess of Cornwell in a civil ceremony, although the Church did bless their marriage afterwards. Nowadays, the Church of England has completely reversed itself[15] [18] and will marry divorcees. It’s hardly surprising that Prince Harry is confused and can’t take the Church seriously, and is going to marry a stranger. Although to paraphrase St. Paul, he can see the obvious and should have more sense.

Phineas’ victim, Zimri, was born and raised in the time of Moses, when God was inculcating into the minds of the populace the basic rules of polite society. The laws and the penalties may not have changed in the ensuing centuries, but the priesthood certainly has. The tragedy of Prince Harry’s marriage to a stranger is the failure of the national Church to instill in the congregation the ancient values. The Church of England now hunts with the hounds and runs with the hares.[16] [19] To reestablish the credibility of throne and altar, the Church needs to return to its roots and produce priests who believe enough in the God they preach about to tell Prince Harry to repent and sin no more – although it’s doubtful if even anyone in the Church remembers what it means.