The Anti-Christian Alt-Right
A Response to Matthew Rose 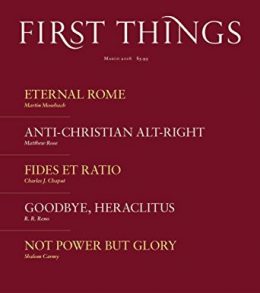 First Things bills itself as “America’s most influential journal of religion and public life.” Founded in 1990 by Richard John Neuhaus, First Things is offers a conservative and Christian outlook on culture and politics. But, like everything else that is conservative and Christian in America today, First Things is careful to say nothing that challenges Jewish cultural and political hegemony. Thus its Christianity is of the ecumenical “Judeo-Christian” sort, and its conservatism is far more neo than paleo.

The March 2018 issue of First Things contains an essay called “The Anti-Christian Alt-Right: The Perverse Thought of Right-Wing Identity Politics,” by Matthew Rose, director and senior fellow at the Berkeley Institute, which appears to be a tiny [Judeo-]Christian and [neo-]conservative outpost in Berkeley, California.

Rose clearly has done his homework, and his article is one more sign that the cultural and political establishment now realizes that White Nationalism cannot be simply dismissed with middlebrow journalistic snark. This has created an opening for more serious scholars — like Rose, Damon Berry, and George Hawley — who actually wish to understand our ideas before dismissing them. In Rose’s words:

Almost everything written about the “alternative right” in mainstream outlets is wrong in one respect. The alt-right is not stupid. It is deep. Its ideas are not ridiculous. They are serious. To appreciate this fact, one needs to inquire beyond its presence on social media, where its obnoxious use of insult, obscenity, and racism has earned it a reputation for moral idiocy. The reputation is deserved, but do not be deceived. Behind its online tantrums and personal attacks are arguments of genuine power and expanding appeal.

Although Rose’s article focuses mostly on Oswald Spengler, Julius Evola, and Alain de Benoist, I was pleased that Counter-Currents, Gregory Hood, and my own work were mentioned — even though I reject the Alt Right “brand” and call myself a White Nationalist and a New Rightist. As a White Nationalist, I advocate ethnic homelands for all white peoples who wish to control their own destinies. As a New Rightist, I emphasize the importance of laying the metapolitical foundations for political change in order to create white ethnostates.

Rose is wrong, however, to describe Christianity as the “chief adversary” of White Nationalism. I think it is wrongheaded to see White Nationalism as an anti-Christian movement, as I have argued in a number of essays:

First, we have many Christian comrades and allies, and I see no reason to alienate them by forcing them to choose between our cause and their faith. Of course, I would not hesitate to force such a choice if I thought it necessary, which brings us to my second reason: Christianity is not our principal enemy.

Christianity lost its cultural hegemony in the seventeenth century to a new civil religion: liberalism, to which the church bends its knee in all essential matters. Even White Nationalists like me who regard the organized Jewish community as politically dominant in white societies acknowledge that this power depends on the hegemony of liberal ideas. Liberalism is our principal ideological enemy, and the organized Jewish community is our principal political enemy. It is only because of their slavish submission to liberalism and Jewish power that the Christian churches have become objective enemies of European man and civilization.

But then again, the church has always accommodated itself to various secular powers, because ultimately its kingdom is not of this world. The church has always rendered unto Caesar, and the White Nationalist struggle as I conceive it is to become the new Caesar: to destroy the hegemony of liberal universalism and replace it with a new hegemonic system of ideas that treats the survival and flourishing of our race, in all its different ethnic manifestations, as sacrosanct. The natural political consequence will be the return of white hegemony in white societies. We will again be masters of our own homes. When that comes to pass, I fully expect the churches to hunt around for biblical and theological rationales for accepting the new order.

And, as Rose so helpfully mentions, there is no reason for the church to dispute the legitimacy of natural feelings of partiality and preference for one’s kin over strangers or one’s nation over foreigners. Indeed, as Aquinas points out in his Questions on Charity, divine grace need not cancel out natural hierarchies but can pass through them. Thus, there is absolutely nothing “perverse” about white identity politics from a natural or a Christian point of view.

Rose’s statement that “Race offers no inheritance, and its mere preservation reflects no human achievement” is near nonsense. Races are extended kinship groups. Would he say the same thing about the family? Our race is our extended family. It is our genetic heritage. And the whole of modern culture belies the claim that its preservation is no human achievement, since the entire cultural and political mainstream of the West, including the churches, are hell-bent on promoting the intellectual deconstruction and physical replacement of the white race.

As I argue in my essay “White Extinction,” all the recognized biological causes of extinction apply to the white race today. Furthermore, in my essay “White Genocide” I argue that these conditions have been imposed by political policies and thus can be reversed by political policies. The destruction of the white man, just as surely as the destruction of the white rhino, is very much a “human achievement.” And saving our race is a human achievement as well.

Many Christians have the residual good sense to see that there is an ongoing war against the family and that it needs to be defended both intellectually and politically. The same is true of the white race, and until Christians realize this, the principal intellectual influences on the rising tide of populist nationalism will be non-believers like me.