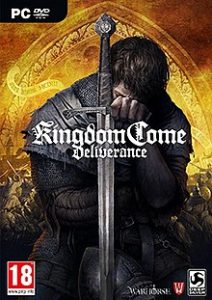 Last month marked the much-anticipated release of Kingdom Come: Deliverance, an open-world action role-playing game (RPG) set in fifteenth-century Bohemia. The game sold five hundred thousand copies across all platforms (PC, PS4, and Xbox One) within two days of its release and surpassed the one million mark after two weeks, an impressive feat for a crowd-funded game developed by an indie studio. Despite its flaws, it’s a meticulously crafted and highly immersive game that succeeds in its commitment to historical realism and has the potential to become a cult classic.The developers have begun to patch up bugs and performance issues, and the game will likely continue to improve over the coming months.

The game takes place in the year 1403, twenty-five years after the death of Charles IV and his son Wenceslas IV’s ascension to the throne. Charles’ reign was considered the “Golden Age” of Czech history: he strengthened the Kingdom of Bohemia, organized the Holy Roman Empire into confederations, improved infrastructure, issued a decree codifying the process whereby the Emperor was elected, and turned Prague into a center of learning and culture (he founded Charles University, which is named after him). Wenceslas, however, was a weak and ineffectual ruler who came into frequent conflicts with the Bohemian nobility. His younger half-brother Sigismund, then King of Hungary and Croatia, seized the opportunity to ally with Bohemian nobles and led an uprising against Wenceslas. Wenceslas was deposed as King of the Romans in 1400, and two years later he was abducted by Sigismund, who then plundered the Empire and captured Bohemian lands.

The player plays as Henry, a young peasant and the son of a blacksmith who lives in the mining town of Skalitz. Shortly after he and his father finish crafting a sword commissioned for a noble by the name of Sir Radzig Kobyla, Skalitz is attacked by Sigismund’s army of Cumans. Henry survives the massacre, but his parents are murdered. He flees to Talmberg and warns its Lord about the advancing army, but later returns to Skalitz in order to bury his parents, promising to avenge their deaths. He is then diverted by a group of bandits, who attack him and steal Sir Radzig’s sword, but two characters come to his aid and transport him to the town of Rattay. This marks the end of the prologue and the real beginning of the game. The rest of the plot involves tracking down and attacking bandits, uncovering a counterfeiting scheme, impersonating a novice in a monastery, and a final large-scale battle.

KC:D’s richly-detailed open world really brings medieval Europe to life. The landscapes are often breathtaking, and elaborate frescos line the interiors of churches and castles. There are some departures from historical accuracy regarding armor, clothing, field patterns, and so on, but overall the game recreates medieval Bohemia in incredible detail. All of the main settlements in the game – Skalitz, Rattay, Talmberg, Uzhitz, Sasau, Ledetchko, etc. – are or were real towns in the Czech Republic. The upper and lower castles in Rattay were modeled on Rattay Castle and Pirkstein Castle, respectively (both still stand in modern-day Rattay), and the churches in Rovna and Uzhitz and the monastery in Sasau also closely resemble their real-life counterparts.

KC:D’s realism extends to the gameplay as well as the setting. The quests are non-linear and can be completed in multiple ways; your choices affect the course of the game and have “real-life” consequences. The game also features a needs system and demands that Henry eat, sleep, attend to the repairing of his weapons and armor, and so on. The food (unless it’s dried) degrades with time. Some of the quests are time-sensitive (you must cure the inhabitants of Merjohed before they die, request reinforcements in time before the nighttime raid on Vranik, etc.).

The combat system is physics-based and attempts to emulate real-life combat, drawing from historical European martial arts (HEMA). It was refreshing that the combat demanded more than mindless button-mashing and was unusually responsive to the strategic timing and placement of one’s strikes. In melee combat, you can strike your opponent from five different angles or stab him head-on. Leveling up your strength enables you to unlock additional perks, including a bunch of combos. The only drawback of melee combat is its inefficacy when fighting multiple enemies simultaneously (another minor disappointment was the rarity of polearms and not being able to store them). In such cases, I usually resorted to using a bow and arrow. The archery mechanic is impressively realistic in how it emulates the physics of real-life archery. Aiming the bow is difficult since there are no aiming reticles, but point shooting/instinctive aiming gets easier with time. In contrast to many RPGs, your proficiency in various skills is not determined by the points you allocate to them in skill trees, but instead simply by how much you train. Both swordfighting and archery require practice to master, since Henry is a peasant by birth and was never formally trained in either (other skills include reading, alchemy, lockpicking, and pickpocketing).

Apart from making waves for being a medieval RPG grounded in historical realism, KC:D (like The Witcher 3 before it) was also the subject of much controversy in the gaming community on account of its all-white cast. Nathan Grayson of Kotaku (a gaming journalist and male feminist who happens to be notorious for his lack of integrity and many conflicts of interest) lambasted it as a “white male power fantasy.” Waypoint, VICE‘s gaming site, refused to review the game due to developer Daniel Vávra’s support of the Gamergate movement and his alleged racism. One commenter begged people to boycott the game:

He’s unashamed in his racism, and it’s clear the game comes from a source of deep rot. I implore people to not buy the game, to boycott it. We have to show that people who hold such disgusting views should not be rewarded, and that games that come from such a rotten, anti-progressive stance don’t deserve to succeed.

Far from a removed question of what did or didn’t happen centuries ago, Deliverance‘s vision of 15th Century Bohemia suggests a continuity of history that says the Czech Republic is for ethnically Czech citizens only. This is especially unsettling in the context of the recent re-election of anti-immigrant, anti-European Union President Milos Zeman, the country’s reluctance to accept Muslim refugees, and the rise of populist nationalism.

To his credit, Vávra (who wore a Burzum shirt at Gamescom in 2017) has not apologized for the game’s lack of diversity and has poked fun at his detractors.

The accusations directed at the game are not entirely unfounded. There is no overt racism in KC:D, but the game unapologetically celebrates Czech history and presents an image of medieval Europe untainted by cynical Left-wing distortion. The plot is centered on fending off foreign invaders and has nationalistic undertones. There is also a scene towards the end of the game that serves as an allegory for what some term pathological altruism. When the antagonist, Hungarian nobleman István Tóth, requests entry into Talmberg Castle under the pretense of needing help for his wounded men, Lady Stephanie obligingly replies that a good Christian ought to help others and invites him in. Tóth then proceeds to take over the castle and hold her hostage.

The game’s “sexism” has also drawn criticism from gaming journalists. The characters adhere to traditional sex roles: The men in KC:D are traditionally masculine and the women occupy subordinate positions (cook, “bathhouse wench,” etc.). The arc of the story follows Henry’s evolution from boy to man and how he transforms himself from an unremarkable dork into a strong warrior and master swordsman. There is an element of laddishness to parts of the game, like the “alpha male” buff Henry earns after having visited a bathhouse.

The controversy over the lack of racial diversity in the game coincides with discussions on the subject of race in medieval Europe that have bubbled up in medievalist circles with the rise of the Dissident Right over the past two years or so. An Asian academic wrote last summer that many medieval scholars

Their efforts to prove that medieval Europe was actually a racially diverse melting pot usually boil down to pointing out records of Europeans’ interactions with non-European merchants or ambassadors, rare instances of illegitimate products of master-slave relationships being raised as full members of white society, or anomalous figures like Adrian of Canterbury (who was a light-skinned Berber) or St. Maurice (who exists only in legend). White European merchants in the fifteenth century would have taken part in commercial transactions with Asians and Africans, but medieval Europe was still a normatively white society in which non-whites were regarded as outsiders. Furthermore, the story in KC:D takes place over a rural stretch of land measuring about nine square kilometers. Even a bustling village like Rattay would have been far from cosmopolitan, and one can say with certainty that there would have been no “people of color” living in that part of Bohemia at that time. Leftists seem to know this deep down and are reduced to desperately proposing absurd scenarios (“What if a group of black Africans came through and stayed at an inn and someone got pregnant?”).

My only major complaint about KC:D is that the loading screens that precede and follow cutscenes, as well as some of the dialogue, sometimes drags on and interrupts the flow of the game. The voice acting is also not fully synchronized with the animations, and is somewhat uneven in quality. There are a few bugs and glitches, which will probably be patched up in the coming months. The save system (you can only save manually by drinking an expensive alcoholic drink called Saviour Schnapps) is actually not much of a problem, because you can brew your own Saviour Schnapps or install an unlimited saving mod.

The cliffhanger ending (Henry does not find Markvart von Aulitz, the man who murdered his parents, or recapture his father’s sword) would have been a disappointment but for the fact that it suggests a sequel is in the works. The developers’ initial plan was to split the game into three separate acts, the first and second taking place during the early 1400s and the third during the Hussite Wars. It is possible that they decided to split it into two separate games. Coincidentally, a Czech film on Jan Žižka – acknowledged to be one of the greatest military leaders in history and a Czech national hero – is set to be released later this year.

Video games are a medium ideally suited for subliminally communicating political ideologies and influencing the minds of young people. An article published in The Guardian a couple of weeks ago discussing video games’ role in contributing to the rise of the Dissident Right pointed out that they demand that the player actively identify with and participate in a narrative, which enables them to make a particularly strong impact on the psyche, and furthermore that a surprising number of such games are imbued with subliminal Right-wing messages. KC:D’s promotion of national loyalty and heroism places it in this category.

Playing a historical RPG cannot replace actually reading about European history. But if online comments are any indication, the game has inspired a number of players (largely young white males) to learn more about the time and place the game depicts and about medieval European history in general. This alone makes it worthy of commendation.