In Praise of Jared Taylor:
A Model for Would-be Leaders of the Right 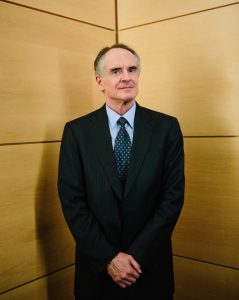 For quite a while now, I’ve been advising friends on the Right by suggesting they ask themselves a simple question: “What would Jared Taylor do?” Aside from the solid work he has done for our cause for close to thirty years now, you will be hard-pressed to find anyone who has anything bad to say about Jared. When it comes to leadership, character is the be-all and end-all. Jared has plenty of it, while others on the Right who proclaim themselves “leaders” (something Jared has never done) often seem to have very little.

I believe there must be people on the Right who don’t like Jared on a personal level, but I believe this sort of in the same way I believe there’s probably a Bigfoot. Yes, I am aware that some criticize his strategies, the focus of his efforts, and his unwillingness to address certain questions. But I’ve never met anyone who had anything bad to say about him as a man. That’s really my focus here. But before I say more about Jared’s sterling character, and why he is a model of leadership, let’s just briefly review the man’s achievements.

Jared founded American Renaissance as a periodical in 1990 and held his first conference in 1994. It drew about 160 people. Jared continued holding conferences every other year until 2011, when he began holding them annually – an indicator of his success. The most recent conference, in 2017, attracted 300 attendees – and another 150 had to be turned away simply due to lack of space. Protesters at AmRen conferences have become a regular feature. But at the 2017 gathering, black-clad Antifa thugs were more aggressive than usual in trying to disrupt things. For the first time in AmRen’s history, two of the protesters were arrested. All of this, of course, is a sign of Jared’s success. The AmRen conference has become the annual Big Event for the Right, and the benchmark for judging all other such gatherings. A friend of mine recently told me of an upcoming conference of the European Right, saying excitedly, “It could be as big as AmRen!”

Jared’s Website and print journal are a goldmine of information and analysis, primarily focused on what he calls “race realism.” (The journal ceased publication some years ago, but its essays are available on the Website.) The articles, by Jared and others, are of the highest intellectual caliber, and are uniformly “fact based”: i.e., claims are backed up with evidence, some of it from the hard sciences. As a result, his critics on the Left (who routinely smear him as a “white supremacist”) describe him as making appeals to discredited “pseudo-science.” This basically means that he appeals to scientific fact that they would like to wish out of existence since it discredits their ideology. Jared has also written and edited several books. In recent years, he has been producing YouTube videos, which are models of cogent argument and persuasive rhetoric.

In terms of his output, Jared is very obviously an example to us all. Again, however, it’s his character I want to focus on here. Why is he so respected on the Right?

I met Jared for the first time in, I believe, 2001. My first impression of him was that he was an old-fashioned Southern gentleman with a layer of Ivy League polish – he received his BA from Yale. But there is no pretension about him: he lacks, thankfully, the insufferable toffee-nosed quality sported by Yalies like the odious Bill Buckley. In fact, there is nothing false about Jared Taylor at all; no sign that he is concerned with impressing others and projecting an “image.” He lacks vanity – or at least shows no real signs of being vain. In fact, I believe that one of his most important qualities – and a significant reason for the respect he has earned – is his selflessness.

Now, Jared would balk at this – indeed, this entire article and its praise are likely to embarrass him tremendously. But that is just evidence of the selflessness to which I am referring. Jared is entirely devoted to the cause of saving his race, through educating the public about racial differences, and about the Left’s campaign to malign, dispossess, and destroy whites. Jared certainly does seek attention – through his conferences, his writings, his videos, and the many interviews he has granted. But he does not seek attention for himself – only for the cause he believes in. When Jared seeks and receives attention, there is no confusion in our minds as to his motives.

Jared’s commitment is to truth, not to appearances. He lives modestly, in the suburbs of northern Virginia. One imagines that Jared has vices. But they are probably things like passing the port the wrong way, or taking two lumps of sugar in his tea. Speaking ill of others is certainly not one of Jared’s vices. He has managed to avoid this for most of his career on the Right. When attacked, he often prefers to maintain a dignified silence rather than stoop to the level of his attackers. Though Jared is no doormat – as his recent lawsuit against Twitter demonstrates.

Jared does not posture. For example, he does not assert that he is a leader, he simply leads – by example. He does not – and did not – even aspire to lead anything. But he leads nonetheless, in virtue of his achievements and his unimpeachable character. Jared is the best example I know personally of a natural leader. He serves as an excellent illustration of one of Julius Evola’s basic principles: that power accrues to the man who does not seek power; who builds a stable center within himself that cannot be corrupted by desire, attention, or flattery. (In Jared’s case, his power is influence.) Jared is a strong personality, and such men often attract the weak and the needy, or at least the directionless. But Jared would never enjoy, let alone seek, the company of sycophants. One has the feeling that Jared (a philosophy major at Yale) has often revisited Aristotle’s description of the “great-souled man” in the Nicomachean Ethics.

We respect and admire Jared because he does not seem to need our respect and admiration. And we admire him, again, for the purity of his motives; his selfless devotion to our cause. That devotion has cost him a great deal over the years, and he has had to make many sacrifices. He has been the target of hatred and smears from the unhinged Left. He has lost money (his involvement with the Right has cost him other sources of income). At least he is blessed with a loving (and long-suffering) family.

Yes, of course, it’s true that Jared’s publications and his conferences don’t deal with all the issues that interest us. He is focused on certain matters, and not others. He believes that there is, and should be, a division of labor on the Right. He does not aspire to position himself as supreme leader of our fragmented movement, nor does he aspire to turn AmRen into the dominant organization on the Right. Jared is pleased when other like-minded folks do good work, and when they receive attention for it. He does not envy the successes of others, or feel malice towards those who find themselves momentarily in the spotlight.

Now, please don’t misunderstand me: I am not nominating Jared as “The Leader.” I do not believe that at this stage, our movement can have a supreme leader – and I do not believe it needs one. Right now, the movement – as I have said – is fragmented. But that is not such a bad thing. It’s a movement of many voices, some of them extremely talented. It’s a movement of many individuals in many countries, affiliated (or not affiliated) with different organizations, producing all sorts of different product: Websites, books, videos, conferences, and so on. And, let’s face it, some of “us” are LARPers and trolls. We also disagree about many things – some of us, for example, are Christians, and others radically anti-Christian. Ours is a young movement, and this “diversity” (if you’ll pardon the expression) is a good thing. We are not at the stage where we can or should be “united” in any organizational sense. This may occur later on – or we may simply stay this way, hitting the enemy on multiple fronts, with multiple voices, never providing the enemy with One Big Target to go after (which is one of the inherent problems with the aspiration to “unite the Right”).

No, I’m not offering Jared Taylor as “my leader.” I am merely offering him as a model for others – a man whose character and record are worthy of emulation by all who aspire to lead, in whatever sense. We need many leaders: leaders who inspire others with their hard work, selflessness, stability, and good sense.

Three cheers for Jared Taylor – an example to us all!