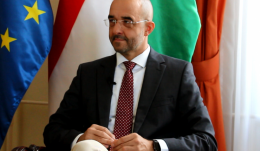 An interview by the French Rightist TV Libertés [1] with Zoltán Kovács, the official spokesman for the Hungarian government, regarding the October 2016 referendum on the European Union’s attempt to force Hungary to accept a share of the migrants that have been flooding into Europe since the crisis began. Hungary’s next national election will be held in less than a month, and the issue of the EU migrant quotas has been the primary focus of the case being made by the ruling Fidesz party of Prime Minister Viktor Orbán for why they should be returned to power. The interview is conducted in English.