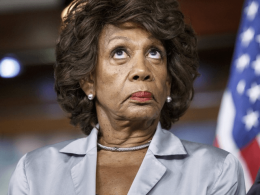 I never was the biggest fan of Richard Pryor. He was too blue, too prurient, and caricatured himself far too often for my taste. His lecherous take on white women and race-mixing also has no place in a red-pilled world. However, he had talent and he understood black people. Often during his 1970s-1980s heyday this was enough for him to produce effective comedy about the black experience in America; so much so that his frank and sometimes unflattering take on blacks might even run afoul of modern political correctness if it were aired today.

President Trump’s recent comment about black congressman Maxine Waters being “a low IQ individual” reminded me of a funny Pryor routine from the early 1980s. In it, Pryor describes himself as a naïve nineteen year-old working at a “Mafia nightclub.” You can view it here before continuing to avoid spoilers.

In the routine, Pryor becomes angry that the paisans running the joint weren’t paying one of their black strippers. Having no idea about the danger he was about to get himself into, he barges into their office with a cap gun, intending to intimidate these hardened criminals with his blackness. Pryor gives the club owners his most menacing black guy glare, which “usually scares whitey to death” and demanded the money.

And the effect was . . . nothing. In fact, the Italians found this importunate black kid amusing and started laughing. Pryor then spends the rest of the routine doing a passable imitation of Italian-American Mafioso laughing and telling jokes about murder and food.

Take out the part about murder, and you have the appropriate white reaction to threats from black people: that is, amusement bordering on contempt. Since the Civil Rights Movement at least, the black American population has alternately played on white guilt and white fear in order to get what it wants. Pryor riffs on that nicely in his routine, which is one reason why the humor hits home. These days, however, this plays out repeatedly—and without the humor—with Maxine Waters who has been calling for President Trump’s impeachment practically ever since he was elected. Like Pryor’s cap gun, her charges against Trump are completely bogus. She seems to think that by being black and grievously angry all the time she can intimidate whites into climbing on board the impeachment train.

Here’s a taste of this woman’s righteous spite:

Regarding the Trump dossier: “Oh, I think it should be taken a look at. I think they should really read it, understand it, analyze it and determine what’s fact, what may not be fact. We already know that the part about the coverage on him about the sex actions, uh, is supposed to be true, uh, they said that’s absolutely true.”

Tea Party: “I am not afraid of anybody. This is a tough game. You can’t be intimidated. You can’t be frightened. And as far as I’m concerned the Tea Party can go straight to hell.”

Rodney King Riots: “If you call it a riot, it sounds like it was just a bunch of crazy people who went out and did bad things for no reason. I maintain it was somewhat understandable, if not acceptable. So I call it a rebellion.”

Abortion: “I have to march because my mother could not have an abortion.”

Obviously, this woman is an embarrassment to civilization. And if her constituents were a little smarter she would be an embarrassment to them as well. As you can see, Trump’s assessment of her is correct. Maxine Waters cannot think well on her feet; she’s nasty, corrupt, hysterical, and incapable of looking past the afro-centric socialist playbook which black Democrats have been using for going on fifty years. Clearly, she’s a piece of work, but as it stands, she has been serving in the US House of Representatives nonstop for over twenty-seven years. Apparently, the voters in her districts are dumber than she is.

So far the most suitable response to this resentful woman has been to ignore her. While the conservative press has had a lot of fun at her expense over the years, conservative politicians (especially the white ones) have pretty much kept a dignified silence about her so not to enrage her any further. They may not be so intimidated to do as she says, but they are intimidated enough not to call her out for her imbecilic antics.

Now enter Donald Trump. I know that the Dissident Right has had mixed reactions to him so far. Trump has made mistakes and disappointed us from time to time. But he has done a lot of things right as well. One of them is to not be intimidated by the likes of Maxine Waters. In fact, he’s amused by her in the same way that Pryor’s Mafia bosses were amused by him. Speaking extemporaneously, Trump had this to say about Waters:

Trump’s insight into the brain of Maxine Waters is remarkable for two main reasons. First, it denotes a return to the time when whites were not afraid of black people. Whites saw them for what they were and didn’t bother to take their grievances seriously given how blacks were far better off under Pax Caucasica than they were in the Hobbesian state of nature back in Africa. According to Thomas Nelson Page, a majority of blacks in the antebellum American South understood this as well and therefore were not terribly anxious to turn on the white masters, even during the Civil War. They knew a good thing when they saw it.

The last president to express this kind of fearlessness in the face of angry blacks was Ronald Reagan. While campaigning against Jimmy Carter in 1980, he famously yelled at a crowd of blacks who were trying to shout him down and enjoyed a boost in popularity shortly afterwards because of it. But even this doesn’t touch what Trump said. So impervious is Trump to the spears of political correctness, he is reminding white people that they can once again look blacks in the eye and call their bluff. Sure, there’s been blowback. But by taking the abuse for us, it’s as if he’s providing us cover to do as he does.

For the Left, this marks a rude return to the pre-Civil Rights Movement era in which race-realism and race-tribalism among whites were more common than they are today. The Left would have to rewrite their playbook entirely to survive in such an environment. Since the Left is all about ‘progress’ they will be loath to do that. No, for them, it’s forward, always forward. And to keep marching forward they must keep blacks in their coalition. This is why leftist institutions such as the news media and Hollywood either ignore or downplay the unrelenting misbehavior of blacks. This is also why Democrats pander to black people and tolerate petulant dimwits like Maxine Waters. More to the point, the Left shrouds its black allies in an aura of numinosity and makes it taboo for anyone not on the Left (namely, conservative or right-wing whites) to point out their obvious flaws.

For example, in 2009 Ann Coulter described Waters as stupid on Julie Menin’s ‘Give & Take’ program, and was labeled a racist for it. Of course, Coulter is a bestselling author and pundit and could afford to be tarred in this way. Most of us cannot and will therefore refrain from calling a spade a spade when it comes to the stupidity of most black people. Advantage: the Left.

With Trump, this has all changed. As I have pointed out before, anything with the imprimatur of the President of the United States on it cannot be ignored. Calling stupid blacks stupid in public is now permissible, regardless of what the anti-white Left thinks about it. It’s up to ordinary whites and their leaders and celebrities to follow Trump’s lead and go public with their race realism. We must press this advantage as far as it will go since the window Trump has opened for us will not remain open for very long.

The second beautiful thing about Trump’s comments, aside for their obvious veracity, that is, is that he twice mentioned IQ. The IQ test and other psychometric measures have been reliably pointing to black academic inferiority to the other races for decades now. Trained psychometricians—that is, the people whose job it is to measure human intelligence—have designed these tests. Before going live, the tests themselves are tested, for language and readability, for content errors, for unexpected statistical outcomes, and for cultural biases. All test questions must overcome these hurdles before seeing the light of day. One would think that after surviving such a rigorous environment IQ would be the final arbiter in any discussion about racial academic differences. But with the Left, of course, it’s not. In fact, the Left will discredit the notion of IQ any way it can, and will make excuses for poor racial performances any way it can. Either that, or it will resort to platitudes about how mean it is to have objective measures about human beings to begin with. Observe the first verse in the song “IQ” written in the mid-1990s by indie rocker and committed lefty Ani DiFranco:

When I was four years old, they tried to test my I.Q.
They showed me a picture of 3 oranges and a pear
They said, “Which one is different? It does not belong”
They taught me different is wrong

Now here are the last four:

I’m learning to laugh as hard as I can listen
’Cause silence is violence in women and poor people
If more people were screaming, then I could relax
But a good brain ain’t diddley

If you don’t have the facts
We live in a breakable, takeable world
An ever available possible world
And we can make music

Like we can make do
Genius is in a back beat
Backseat to nothing if you’re dancing
Especially something stupid like I.Q.

For every lie I unlearn, I learn something new
I sing sometimes for the war that I fight
’Cause every tool is a weapon
If you hold it right

So we go from laughable relativism to teenage angst to moral preening to . . . what? A veiled threat of violence? All because a bunch of white men got together a century ago to devise ways to measure intelligence for army entrance exams.

Yeah, IQ is a touchy subject on the Left. That’s because it’s kryptonite to their intimidation tactics, like those employed by Maxine Waters. Any time a Leftist brings up racial disparities, we should emulate President Trump and bring up corresponding racial disparities in IQ. And if we can do it while laughing at them, like those Mafia bosses in Richard Pryor’s old night club, so much the better.

« The Anti-Christian Alt-Right
A Response to Matthew Rose

Ancestral Being, Part One »