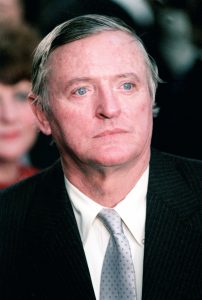 Many on the Dissident Right these days like to deride conservatives. Conservatives are seen as the boobs who have been at least nominally in charge of the Republican Party since the end of the Cold War. We all know the names: Newt Gingrich, George W. Bush, John McCain, John Boehner, Mitt Romney, Mitch O’Connell, Paul Ryan, and many others.

Behind them all, pulling their ideological strings, was the Godfather of modern conservatism William F. Buckley and Jewish neocon writers such as William Kristol and Charles Krauthammer. As representatives of the Right, these men were charged with resisting the leftward lurch of Western Civilization. Of course, they failed, and it wasn’t for lack of money, influence, or opportunity, either. Despite their rhetoric and promises, many of these men were never comfortable with the Right despite calling themselves ‘conservatives’ all along. So, when the chips were down they offered at best lukewarm resistance to Left. Or, as in the case of Kristol, they had been secretly on the Left all along. We know this because when a viable Republican candidate appeared who was to the Right of them all (i.e., Donald Trump) they, for the most part, resisted him. They resisted him even when he was winning.

After twenty-five years of this, the conservative/right-wing base has every right to feel cheated. The West is more liberal today than it has been since…when? The Spanish Civil War? The French Revolution? Certainly in the United States we’d have to go back to the Great Depression and FDR’s primarily-Jewish Brain Trust to find liberalism as deep as it is today. And even then, with Soviet spies abounding in government, and the Frankfurt School in its heyday, and a boisterous and well-funded American Communist Party causing trouble everywhere it went, people weren’t agitating for transgender rights, and inserting x’s into pronouns, and calling for men to use ladies bathrooms. The Left really has gone crazy these days. And they have power. Aside from commandeering the Democratic Party, they run Hollywood, the media, the universities, and pretty much have the muscle to control what gets said in public and who gets to say it.

Essentially, liberals accept the Left, while conservatives reject the Right. The Left fights to win. Conservatives fight for ideals. The Left embraces race. Conservatives rise above race. This is essentially why the Left has won almost every important cultural battle in the post-Cold War era: their imperatives are closer to the biological exigencies of their base. Meanwhile, conservatives try to keep their base packed into a closet while pretending that everyone cares about budget deficits and the Laffer Curve.

Obviously we have an imbalance here. In the political arena, conservatism has no chance against the Left since the former is a social construct and the latter a political construct. Conservatism is a way of life: the clothes you wear, the friends you keep, the music you listen to, your religion, your habits. Further, it’s relative. What could be considered conservative today, such as blasting classic rock and wearing your hair long in the Ted Nugent mold would have been scandalously liberal fifty years ago. The lines between what’s conservative and what isn’t are quite nebulous. This is why people on the Right correctly claim that conservatives conserve nothing.

Liberalism is also a social construct, but by shamelessly arming itself with Leftist weapons and following the Leftist playbook, it makes everything political…church, office, schools, family barbecues, whatever. This is how the Left can occasionally lose at the ballot box and still win where it counts, that is, in having the exclusive right to set the boundaries of the nation’s Overton Window. Everything is political to these people. They are known as Social Justice Warriors, and Vox Day’s SJWs Always Lie provides an excellent rundown of how these people behave and how truly insidious they are. This book also represents an attempt on the Right to beat the Left at its own game, with or without the help of conservatives.

This last part is crucial to understanding the character of the current political struggles in the West. Conservative vs. Liberal is not the same as Right vs. Left, despite considerable overlap. A person can be conservative and vote Left. Two great examples are American blacks and Arab-American Muslims. These groups on the whole are serious about religion and have little time for liberal pieties such as women’s rights, gay pride, et cetera. Yet over ninety percent of them vote Democrat.  On the other hand, a person can be a liberal and vote Right. Milo Yiannopoulos, a flamboyant homosexual and race mixer, is the obvious example here. Although conservatives overlap with the Right more often than not, we should not take that to be a given. There is a deep divide between conservatives and right-wingers that has no counterpart between liberals and left-wingers. Further, as mentioned above, some conservatives are really part of the Left.

Then again, there is nothing wrong with conservatism per se. Once you divorce it from politics, its virtues begin to appear. God-fearing, church-going, patriotic people who follow centuries-old traditions and live by the Gospels and the US Constitution tend to live orderly lives and make great citizens. What’s the point of any nation if it has nothing to conserve? Without a conservative populace, nothing that makes a nation unique or exceptional can last for long. Conservatism within its proper context, therefore, is a good thing. But in politics, it’s tantamount to leading with your shield rather than your sword. It’s no coincidence that a thrice-married, playboy tycoon and reality television star such as Donald Trump is hardly a bastion of conservatism but remains a man of the Right, at least more so than any of his predecessors since Ronald Reagan. This is because he fights. The goal of the Right, quite plainly, is to beat the Left.

Let’s repeat that. The goal of the Right is to beat the Left. It is every bit as political as the Left is.

In politics, there is no honor in coming in second place. Unlike the list of Republican men above, however, Trump understands this. That day in 2016 when the Drudge Report prominently featured what was purported to be the red-headed black love child of President Clinton, I finally understood it as well. This is what fighting looked like, and I was thrilled it was a man of the Right actually doing it for a change.

But winning entails more than going after one’s opponents. It also involves conveying a positive vision of what the winner has to offer after he wins. This is where conservatism comes in. Conservatism, for the most part, is what the Right fights for. In a white society, Right and Left will not only sling mud at each other, but they will look to the past and current events to determine who is in a better position to lead. Jimmy Carter, after four years of stagflation and malaise and military embarrassment, had little with which to argue in 1980 when faced with a dynamic and charismatic candidate in Ronald Reagan. In a democracy, Right and Left have to sell their positions to the public, with the assumption that the majority of voters will gladly switch parties if the other side has more to offer. This is essentially how Donald Trump won in 2016. He campaigned furiously in places like Ohio, Michigan, Pennsylvania, and other Rust Belt states where Barack Obama had won easily in 2012 and convinced white working class people that he was their man. This is how democracy is supposed to work: politicians persuading open-minded, non-partisan voters of what’s best for them.

But this is not how the Left operates these days. The Left has become little more than a non-white grievance machine which takes into its purview non-whites of all colors regardless of how liberal or conservative they are, as long as they stand against the racial interests of white people. This is racial identity politics, and once it enters the equation, political arguments have competition of the kind that cannot be defeated through reasoned discourse. Putting your guy in office (with a little quid pro quo, of course) becomes more important than whether your guy can do better than the other guy. Remember, the Left is crazy and political about everything. They would rather have bad times with someone they like in power than have good times with someone they don’t like in power. Donald Trump illustrated this beautifully during his State of the Union address in 2018 when he called attention to the historically low black unemployment rate and received nothing but sullen glares from the black lawmakers in the audience. While tacks like this score points with disinterested members of the public and will boost Republican chances in upcoming elections, they are completely useless when the majority of the public is not disinterested. Right now, the majority of the Left is not disinterested, and will see good times generated by the Right only as an opportunity to gain influence and wealth with which they hope to ultimately defeat the Right. The good times themselves become irrelevant in the Left’s power calculus.

And that’s what you get with racial identity politics.