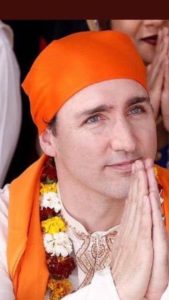 Whatever happened to the perfectly good term ‘fancy dress’? I suppose one might argue that ‘cosplay’ emphasises the element of play to it, of playing the role the costume suggests. One such man who loves to do this is Justin Trudeau. There is nothing terribly wrong with that – except that he does it when representing the country he is prime minister of on the world stage. Even worse, the majority of Canadians seem to think this is perfectly normal. 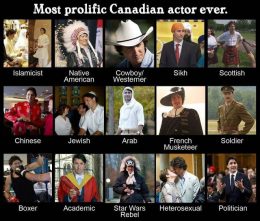 Just a few days ago, Trudeau managed to embarrass himself by immersing himself in his version of Indian culture, dressing himself in traditional Indian clothes and dancing a bhangra. It prompted some in India to ask why this alleged statesman was dressed up as though he were appearing in a Bollywood film and whether that was Trudeau’s image of Indians. The answer is of course that that is exactly how Leftists think of all cultures, in terms of clichés and stereotypes, even while, in their usual doublethink, they say stereotyping is bad. It shows that Leftists have a totally superficial view of culture, that in dressing and acting a role they believe themselves immersed in that culture. Culture to them becomes just a form of cosplay.

I once talked to a Leftist colleague of mine, who had all the trappings – weak father, Iraqi asylum seeker boyfriend, cushy university job – who told me quite frankly that stereotyping of the Other is good when it gives a positive image of them. There are three problems with that. One is that it warps the Left’s sense of reality, whereby they do not see the world as it is. It is why trying to win them over is a futile endeavour. The second is the abandonment of one’s own culture in which one had dignity that would at least be respected by the Other. The other is that, as Trudeau has found out, what is deemed positive by the Occidental Left might not be deemed positive by those from the cultures they seek to extol.

Trudeau has also made another typical mistake made by Leftists like him. He has sought to encapsulate the entire of India in a fancy dress costume. India is a huge place with many cultures, religions, languages and peoples. Yet Trudeau thinks he knows India. The amount of times I have heard university-educated bourgeois liberals (not even hard neo-Marxist Leftists here) say they ‘did India last year’ – as though India can be experienced with any depth in a few weeks’ holiday. I also remember the time when the former football player Frank LeBoeuf was ubiquitous on French television. A recent convert to Buddhism at that time, he used every opportunity to talk about it, as though it made him somehow more interesting. Yet it was just a superficial gloss, an ill-fitting veneer to cover over the authenticity he had allowed to become rotten and shameful by letting it go to rot.

I remember as a child seeing a BBC children’s programme called Mr Benn, which I never liked. In each episode, Mr Benn, a middle-class everyman in a suit and bowler hat goes into a fancy dress shop, where ‘as if by magic’ the shopkeeper would appear, give him a costume to put on, whereupon Mr Benn would emerge out of the back door of the changing room into another world where he could have adventures relating to the costume’s particular theme. And I think Trudeau is no more profound than Mr Benn, a badly animated children’s character with easy-pleasy slogans that pass for morality.

I think these things say a lot about the soft-Leftist liberal mindset. There seems to be a need to have lived what is perceived as a more interesting life without actually having lived it. Coupled with the hard Left Orientalist cult of the Other, it leads to a prostitution to and prostration before other cultures – cultures that are not even understood. We see this with Justin Trudeau. Mr Benn’s creator David McKee lives with his Algerian wife and collects African tribal art. As with Justin Trudeau, yet again we see another prostitute to other cultures haphazardly destroying his own through its abandonment. It seems to be the cancer of the soul of the white middle class.