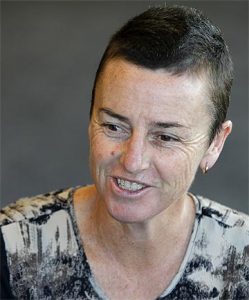 The following open letter was sent to New Zealand Race Relations commissioner Dame Susan Devoy, in response to reported statements inciting violence against opponents of multiculturalism. The portion of the news article relating to Dame Susan’s comments is appended[1] [2], and the reader is invited to consider whether this writer’s perception of the commissar’s comments are indeed reasonable in calling them an incitement.[2] [3]

It is with the utmost concern that I read your reported comments equating the so-called ‘Far Right’ with Islamic extremists, associating the ‘Right’ with terrorism, and demonising those who have views on race relations contrary to your own.[1] [2]

I am not a member of any organisation, and do not support the approach of any of those groups mentioned in the article. I am 61, have obeyed the law, paid my rates and taxes, raised a family, worked, established a home, and tried to raise a small voice whenever I see an injustice in my community, a potential for harm, and in particular in regard to animal welfare. I am extensively published in the scholarly media across a range of subjects, more so than most New Zealand academics, and I am a fellow of several learned societies.

However, after over forty years of research and contemplation, and the ability to apply a dialectical approach to any issue (in other words, to form an opinion based on the best information available, and to change that opinion on the basis of new insights), I am not an enthusiast for the multicultural experiment. Further, I have a preference for Mozart, Vivaldi, Gluck, and Beethoven, rather than African, Polynesian, or Asian rhythms. I have a preference for Michelangelo or Monet over an African fetish carving, or Aboriginal rock art, or the canvasses of an Ofili. I am, frankly, Eurocentric. I do not believe a blending of the cultures bodes well for any of them. What results is a bastardous mix such as that perpetrated in the smeared faeces on a Picasso or Ofili canvas, or the Hip Hop assiduously promoted by MTV and the US State Department.

I also value a sense of community, and community arises through association between individuals and families of like-temperament, forged, largely epigenetically, as an ethnos over millennia. A community and ethnos does not arise through the proclamation of laws and human rights declarations imposed by force. A constitution or a human rights office does not form a ‘people’, as the experience of over two hundred years of the USA as a so-called ‘propositional nation’ indicates. When diverse peoples are imposed on each other, through sundry artificial contrivances, the result is not a community, but escalating bitterness, alienation, and a loss of community.

What for example is an ‘American people’? It is still an amorphous mass held together by what our poet Rex Fairburn called the ‘cash nexus.’

It is this amorphous mass that is being encouraged as a deliberate policy by cosmopolitan money-interests. The Leftist and Jewish intellectual icon Professor Noam Chomsky summarised the position of the ‘Far Right’ precisely when he said of this process:

Capitalism basically wants people to be interchangeable cogs, and differences among them, such as on the basis of race, usually are not functional. Over the long-term you can expect capitalism to be anti-racist – just because it’s anti-human. And race is in fact a human characteristic – there’s no reason why it should be a negative characteristic, but it is a human characteristic. So therefore identifications based on race interfere with the basic ideal that people should be available just as producers and consumers, interchangeable cogs who will purchase all the junk that’s produced – that’s their ultimate function, and any other properties they might have are kind of irrelevant and usually a nuisance.[3] [4]

The subversive character of this as a deliberate programme to enable globalisation was indicated by Wikileaks when exposing the so-called ‘Rivkin Project’, named after the U.S. Ambassador to France in 2010 (Charles Rivkin, Minority engagement report, U.S. Embassy, Paris).

As Chomsky, a Leftist intellectual, and a renowned authority on power structures, implies, multiculturalism is part of the globalization process. It is not new or ‘modern’ or ‘progressive.’ We have seen the process at a certain stage of empire through the millennia, as a significant factor, at least, in the decay of civilizations. I am not referring to miscegenation, which does not seem to have been a factor in cultural decay, but in the mixing of ethos rather than genes.[4] [5] Today the science of epigenetics, rather than genetics, is starting to offer an explanation as to the mechanics of this, in regard to both the rise and fall of ethni.

As you will know the ‘Far Right’ has been met with violence on numerous occasions both here and overseas. In the infamous Charlottesville riot, which is apparently the type of situation you wish to occur in New Zealand, a communist group named Redneck Revolt showed up heavily armed and had called for others to take guns.

Your comments, if reported correctly, seek to demonize those who object to multiculturalism. Moreover, they are an implicit call to violence and mob action against those who do not agree with state policy on such matters. It is the greatest irresponsibility for you to have issued what amounts to a declaration calling for violent opposition against ‘Right-wing’ activities, which tend to be law-abiding.

A conciliatory position would be to sit down and talk to the leadership of these groups, such as they even exist, instead of regurgitating what amounts to the ultra-Left slogan screamed throughout the world: ‘No platform, no free speech, for fascists’ (sic); generally a prelude to attacks of an often particularly cowardly nature.

I recall in 2004 my wife and I went to the National Front flag day event, that ended in a riot, bottles thrown by the Left, conflict with police, a violent opposition organised by anarchists of the euphemistically named ‘Peace Action,’ a non-assuming, harmless tertiary student being chased through the streets and left traumatised; and an individual isolated and surrounded by a mob, and beaten, then pursued, dazed with blood running down his face, while the likes of Val Morse, and other ‘pacifists’ screeched in his ears in their typically hysterical manner. It is transparent from your reported statements, that this is the type of action you are trying to incite.

I have previously asked of you in regard to the abortive attempt to form a European students cultural association at Auckland University, why such an association was considered so objectionable, when every other ethnos has their own association, including Zionist youth, whose ideology was deemed by the UN General Assembly to be ‘racist’ and based on ‘racial discrimination’? Why the double-standard? You apparently have no answer.

When you say that the ‘Far Right’ should expect to be confronted by others exercising their ‘freedom of speech’ we have really reached the stage of the politics of confrontation, encouraged by you, on the pretext of opposing this. When has the ‘Far Right’ ever attempted to confront those with whom they disagree in a mob way, such as is experienced year after year by the National Front when they attempt to hold an annual event in support of the traditional New Zealand flag? I note that it is a public, family event, with women and children present, and that your foot soldiers, prominent amongst whom are Anarchists and Trotskyites, are hell-bent on preventing any such events; not just by verbally disagreeing or distributing literature or holding banners, but attempting to physically prevent any such action, and invariably in conflict with the police.

You justify such histrionics and bigotry by attempting to demonise those who question the wisdom of pursuing a multicultural agenda. You increasingly use an ill-defined term, ‘hate speech,’ to set the stage for state repression through further laws, until tyranny is reached.

You allude to swastika flags; a nonsense, but one might observe the communist flags and symbols among your foot soldiers; an ideology that is arguably the most atrocious in history and one moreover justified in the name of ‘equality’, or as your ideological predecessors, the Jacobins, put it, amidst the genocide of the Vendée, another ‘hate group’ that wanted to retain their identity: ‘liberty, equality, fraternity.’

Should violence occur at one of the very rare ‘extreme Right’ functions, are you going to take responsibility for incitement? These ‘anti-fascists,’ as they designate themselves, are in large part observably psychotic, and display a range of psychiatric symptoms. You are figuratively giving ammunition and approval to the mentally disturbed to vent their spleen against those, few in numbers, who have been demonized. What you have said, reportedly, amounts to incitement.

Islamic State terror groups are not the only groups promoting radical views online in this country; far-right groups in New Zealand are also extremely active online.

“Go on to the National Front website and the propaganda there is unashamedly racist. All New Zealanders have the right to oppose this kind of korero in our country.

“I don’t want our beautiful country to become one where it’s normal and OK for people to fly their swastika flags, or walk on a White Ribbon march in their Nazi uniforms and boots.

“Organisations like the National Front and Right Wing Resistance that espouse their views publicly by exercising their freedom of speech should be prepared for the rest of us to exercise our freedom of speech when we publicly disagree with them,” she said.

Professor Paul Spoonley, Massey University pro-vice chancellor of the college of humanities and social sciences and a specialist in right-wing hate, said more leaders should speak out about hate crime, as Devoy had done.

“I would like to see this country become a lot more considered around things like hate crime.”

[2] [8] It could be added that had New Zealand founding fathers such as in particular Richard Seddon and William Pember Reeves been on the hustings today defending the white workers against alien immigration, which they perceived as being used by international capital, they would be lambasted by the Establishment as ‘Far Right’ and ‘neo-Nazis’, as would the early labour movement.