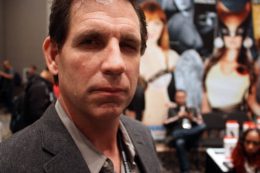 To begin, let us remember that the federal government can, and every now and again does, bring pornographers to court, successfully find them guilty of an obscenity charge, and send them to prison. The 1973 Supreme Court decision in Miller v. California set down these guidelines for determining whether something constitutes as “obscene”:

In the last decade, three pornographers have been shut down after being found guilty of making and distributing obscene material: Rob Zicari, Janet Romano (his wife), and Paul Little. Several others were brought to trial but not convicted. The point being: this is not a fantastic or utopian proposition. The government has done this recently and can do so again.

As I suspect you know, the federal government does not possess the resources or the popular support to go after every pornographer. So instead, legal action is reserved for those producing the most disgusting “movies” of the day. This is perfectly reasonable. For the record, I do not support locking up every person, or even director, involved in pornography. But it is hard to make a case that the three Americans listed above did not get what was coming to them.

Mr. Zicari and his wife (they worked together), filmed “simulated rape” scenes so repulsive that documentary crews and journalists interested in pornography often walked off the sets in disgust. In 2002, the two made a movie wherein Osama bin Laden and his confederates gang rape an American journalist. Even other pornographers thought the Zicaris were taking things too far. AVN Magazine, the New York Times of pornography, refused to review or advertise anything connected to them. Larry Flynt, the founder of Hustler, openly spoke ill of the couple, and refused to help them financially when they were brought to trial, even though Mr. Flynt himself had faced similar charges more than once. Imagine making pornography in such bad taste that Larry Flynt stays away from you.

Paul Little’s pornography was moderately less offensive. No fictional rape, just girls made to look as young as possible being degraded as much as possible. By “degraded,” I do not mean slapped around, bound, and sodomized. What I mean is having speculums inserted into their anuses to stretch them out. Or holding open their gaping anuses so that Mr. Little could urinate in them—and then have them drink it. Sometimes he would urinate directly into their mouths instead. There is something of a mental exercise in asking yourself which is more reprehensible.

Locking up pornographers has precedent and rationale. It is also popular. The number of average citizens or politicos outraged by imprisoning these people is tiny. You and your administration are unpopular, and could use a win—a bipartisan win at that. I see no reason why feminists of all stripes and Democrats generally would oppose using the Attorney General’s office to pressure the pornography industry into striving to be more tasteful and less violent.

Moreover, I have a great candidate for you and your office to start with: Jim Powers. His entire oeuvre is disgusting, and as a director, he is uniquely unprofessional, in dangerous ways (more on that later). Taking him to trial with every intent of prosecution is likely the best “shot across the bow” you can give to the pornography industry. Find a body of evidence for this below. And since this is an open letter, a warning to readers: this is not material for the faint of heart.

More than those two, there is another series of Mr. Powers’ that is worth looking at in even greater detail: White Trash Whore. Natalie J. Purcell summarizes and analyses it with particular insight in her book, Violence and the Pornographic Imaginary, from which I will quote at length:

The DVD jacket for White Trash Whore 10 . . . . reads ‘Look at daddy’s little girl, stretched to the limit by huge black cocks. Her every tight hole packed with dark man meat! Another white trash whore degraded for your viewing pleasure!’ . . . . The film opens with a ‘white trash’ man—complete with a mullet hair-style and a southern drawl—ordering his wife around. He demands that she serve him the SPAM she’s cooking: ‘C’Mon woman!’ With a thick twang in his voice, he asks, ‘When’s yerr little whore daughter gittin outta prison?’ He continues a barrage of insults against the ‘slut’ before leaving with his son ‘Junior’ to work on their monster truck. After the opening scene, the film proceeds through aggressive, sloppy, expletive-ridden incest sequences and culminates in a gang bang featuring a white ‘girl’ and several black men. Predictably, the interracial sex scene is billed as a supreme thrill for the black men and as supreme degradation for ‘daddy’s little girl.’

Ms. Purcell goes on to note how the movie:

. . . glories in insulting black men and lower-class white people, by presenting the former as sex-hungry gang bangers and the latter as ignorant hicks. The film features no heroes who invite identification; the entire cast is mocked and degraded even if a special degree of insult and absurd is allocated to whores. . . . We, the audience, are supposed to laugh when Dad laments that ‘my son can’t even bang gang a girl right,’ or when Junior says ‘I love having a sister’ in the middle of intercourse with her. One-liners like, ‘With a daughter like this, who needs a whore?’ Are delivered gleefully for comic effect.

Later on, she observes with chilling insight that:

The characters who have sex are angry at and disdainful of each other. Dad despises the daughter he uses for sex; he tells her boyfriend what a whore she is and invites him to ‘get [his] payback’ by furiously slamming into her body. In the finale, the black men marvel at their opportunity to degrade a ‘white bitch.’ For virtually every man in the movie, sex is a vehicle for revenge and a means to humiliate enemies.

Remember that today, with the internet, teenagers—boys especially—are discovering pornography at younger and younger ages. Plenty think that what they are encountering is normal, and sets their expectations for, and understanding of, sex. Read this essay by the brilliant Rod Dreher if you doubt my claim. That means that changing the nature of pornography produced today will impact an entire generation’s grasp of sex.

Finally, Jim Powers puts his performers in harm’s way. Here is a video of a lesbian group sex scene Mr. Powers shot. In the opening of the scene, the women drink champagne. Not non-alcoholic champagne, real champagne. Allowing pornstars to perform under any kind of influence is incredibly irresponsible, and in this shoot had real consequences. Champagne spilled onto the hand of one performer, who failed to clean it off. She then uses that hand repeatedly to touch the vulva and vagina of another woman, who makes it very clear that this hurts because of the alcohol’s irritating effects. The scene comes to a dramatic close when the woman being hurt loses her temper and assaults the girl with the unclean hand. Mr. Powers stays off camera and lacklusterly asks the women to settle down.

During another shoot, Mr. Powers rented out a fraternity house as the location and allowed the fraternity brothers to watch three of his employees have sex live. The three performers are on a pool table surrounded by at least 50 frat boys. The frat boys shout at and harass all three pornstars incessantly. At least one reaches out and touches one of the women’s genitals. It does not take long for the three performers to get fed-up and walk away. In the parking lot, Mr. Powers oscillates between demanding and begging that they go back to the frat house and finish the shoot, insisting that the situation was not so bad.

Imagine yourself in the position of either of the two women that day. You are naked and having sex, and surrounded by dozens of young men completely unknown to you. You do not know how sober they are, or their criminal histories, or how many of them have venereal diseases. All of them feel emboldened by the fact that they are on a porn set, of sorts, and their overwhelming numbers. There was no security present, mind you. Had the frat’s mob mentality reached a fever pitch, they could have quickly overpowered the few men not with them and gang raped the two girls.

Perhaps what we should be asking is why is Jim Powers is not already in prison? While we cannot change the past, you Mr. Sessions, have the ability to greatly impact the future. Please draw up charges against Jim Powers.