Creating a Place to Be 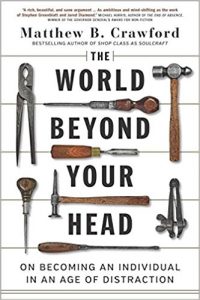 Matthew Crawford
The World Beyond Your Head
New York: Farrar, Straus and Giroux, 2016

Matthew Crawford is a new but powerful intellectual. His debut in the public sphere began in 2009 with his book Shop Class as Soulcraft, which was affectionately dubbed “Heidegger and the Art of Motorcycle Maintenance” by Slate, and positively reviewed by Francis Fukuyama. Crawford’s second polemic, however, is more far-reaching, and stands to supplant his first work as his philosophical masterpiece.

The book seeks to resolve the crisis of attention in which we find ourselves. Modernity has gently but completely entrapped much of the world, not merely in advertisements and clickbait, but in automated distractions that have no care or interest in the cognitive cost that these stimuli impose on their audience. These claims on our attention make it difficult to develop a coherent thought, discern what is valuable, or build competence in a skill—all of which require periods of uninterrupted focus that our world doesn’t seem interested in allowing us. But perhaps worse than that, these distractions seem designed to create values—or even dependencies—in line with the interests of those crafting the distractions. Because the distribution of attention is a zero-sum equation, valuing what is procured for us by “choice architects” comes at the expense of other things we might otherwise value. Focusing on a social media or email notification on my phone, for instance, means that in that moment, I cannot focus on work that I get paid for, giving my daughter a bath, or paying attention to my wife. The constant stream of interruptions reduces our ability to marshal our attention effectively in the creation of an authentic self.

Crawford argues that the origins of the problem can be found in an Enlightenment idea of freedom most powerfully espoused by Immanuel Kant, which separates our will from the material world. The goal was to save human freedom from the mechanistic determinism of Thomas Hobbes by placing human autonomy on a plane of existence beyond the reach of the world. According to Kant, action must be inspired by the realm of the pure intellect, of a priori moral laws, if we are to be free agents, untarnished by mechanistic infringements upon our autonomy. This retains “free will,” and the dignity of humans as agents touched by the divine spark . . .  or does it?

The book meanders through the relevant literature on perception and cognition, eventually concluding that our ability to see is inseparable from motion, and that thinking similarly contingent upon objects in our environment, including our bodies. In other words, the agency Kant was seeking to protect is not shielded by running away from the material world, but rather is expanded (to whatever degree it can be) by orienting ourselves in relationship to the world.

By way of explanation, Crawford introduces the reader to the concepts of ‘jigs’ and ‘nudges.’ Jigs are contraptions—usually ad hoc—that allow a carpenter to make cuts at exactly the same length without having to measure every individual piece. More broadly, they are ways that experts design their own environment to take some of the cognitive burden of their work, allowing them to focus on other things. The term “nudge” was coined by Cass Sunstein, the head of the Office of Information and Regulatory Affairs under President Obama. Nudges are similar to jigs in principle, in that they accept the limitations of human attention and attempt to engineer behavior, usually by establishing default choices (in Cass Sunstein’s case, by changing the default employee 401k choice to “opt-in”). However, unlike the jig, which is an organic creation and usually an indirect product of the environment itself, the nudge is the product of administrative fiat.

The efficacy of the jig and the nudge in the real-world show that this materially grounded conception of human will is not actually escaped by embracing Kant’s Grounding for the Metaphysics of Morals. All that happens is that the reins of attention—our physical world—are presented for control to someone else.

The book takes a downright sinister turn in the exploration of the psychology of casinos. The phenomenon of the casino demonstrates the naivete—or insidiousness—of people who moralize about pulling ourselves up by our bootstraps in an environment purposely engineered to keep that from happening. The design philosophy behind casinos, and perhaps of much of social media, is essentially autistic. It affords the participant the gratification of pseudo-action, having ‘made something happen,’ and this provides a sense of comfort. But this pseudo-action happens within such a constrained system that increases in skill or experience are not relevant, and sometimes not possible. Individual growth does not result in any meaningful change in outcome. By contrast, one can be constrained by the nature of a motorcycle engine, and by accepting and learning these constraints, the individual gradually become more competent in fixing them. Being constrained by the rules of a slot-machine, however, gives the actor the feeling of power over their environment (I push a button, and the machines spins) without any possibility of meaningful improvement.

Such a design philosophy does not make people more free. By placing their “free will” beyond the reach of their material environment, we make room for all sorts of impositions on people’s ability to act in their own interests, and we may even make them vulnerable to exploitation. In the casino, this can include exploitation “to extinction.”

The book lays out a lethal criticism of the libertarian idea that “people should be allowed to make their own decisions” on this point. Our decisions are not free, and cannot be free, because absolute freedom of choice would render decision-making impossible. The defense of libertarian freedom requires us to join Pennsylvania governor Ed Rendell, and say of problem gamblers that “anyone who has that bent is going to lose their money anyways.”

The “freedom” that both those on the left and the right want to preserve is not a kind of “ability to do otherwise,” though people often attempt to describe it in this way. Rather, it is the kind of feeling of power that Nietzsche articulated, which Crawford captures in his description of a line-cook who feels “like a machine” when he is performing at his best.

What he seems to convey when he exults “I’m a machine,” ironically enough, is that he is caught up in a moment of savoring his own distinctly human excellence. One virtue of the extended-mind rubric is that it offers a theoretical frame for understanding a very basic, low-to-the-ground mode of human flourishing, in which we are wholly absorbed in activity that joins us to the world and to others. The cook finds pleasure in his ability to improvise; to meet the unpredictable demands of the situation, and to do so within the structure imposed by the kitchen.

It may be less surprising to some than to others that a writer like Rebecca Newberger Goldstein might take issue with Crawford’s diagnosis, particularly with his assessment of the Enlightenment. While Crawford’s argument is, as Goldstein rightfully points out, by no means a complete history of enlightenment thought, the incompleteness of his account of Spinoza and Hume is not particularly relevant to the argument. Crawford is not saying ‘the Enlightenment was bad,’ but rather ‘this particular conception of the self is wrong.’ By outward appearances, Goldstein’s fixation on the Enlightenment looks like a superficial excuse to disagree with Crawford’s account of coherent self-hood, agency, and a moral theory of attention, without actually addressing the argument itself.

In the end, Crawford’s theory of attention and the self presents a challenge to the neoliberal and libertarian conceptions of individual agency that have separated us from the legacy of those who did have our best interests at heart. It is an argument which—red herrings about the Enlightenment aside—does not appear to have a strong counterargument. If it is correct, then it poses the reader with the challenge of finding some way to ‘jig’ our collective environment in such a way that the possibility of forging a coherent self is possible. If we don’t, then we will be ‘nudged’ into accepting an autistic existence in a kind of Brave New Casino.