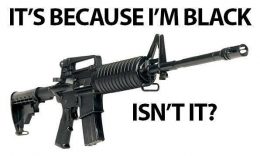 White advocates should consider gun control. Now before the gentle reader sees red, blows his top, or goes about losing his religion, hear me out. Remember, by reading a “white supremacist” website one is already prone to broadmindedness in addressing social problems. Also remember that Counter-Currents writers have endorsed prohibition and paternalism and the world didn’t end. Furthermore, fulfilling the idea of the 14 Words should include a raft of progressive ideas like safe schools, a clean environment, good public infrastructure, and universal healthcare.

Before proceeding further I must first point out that the proposals below are, for the most part, goals with no associated strategy for achieving them. It’s all for after the revolution. However, with clear goals, the details of the practical methods by which to attain them often appear.

Get Guns Out of the Hands of Non-Whites

The reason for the 2nd Amendment and the unique American private arms race is that whites with property and wealth live among large non-white populations that are resentful, violent, and have a history of theft and attack. It’s always been this way. For further reading regarding this idea, I suggest the story of Mayflower passenger John Alden’s Italian-made Wheelock carbine.[1] By non-whites I mean all of them, blacks, Hispanics, Asians, Arabs, Jews, and any other tribe of cannibals and swindlers that I missed. Perhaps there can be an exception for Amerindians, but most tribes don’t need guns and they don’t need them off-reservation.

Question: What about the Asians protecting their stores in the ghetto from chimpouts?

Answer: Why should you care about Asians and their stores in the ghetto?

Question: There are guns everywhere and they are the ultimate durable good, is this practical?

Answer: There doesn’t need to be battalions of cops rounding up guns in every Little Haiti. Not allowing sales to non-whites will do a great deal of good. Also, the guns can be confiscated through the slow cleanse concept. This also works with Greg Johnson’s “Slow Cleanse” to attain the white ethnostate: should Tyrone or Jamal get caught with a gun, he gets a one-way ticket to Mauritania or Senegal.

Getting guns out of the hands of non-whites will greatly reduce the need for whites to spend a great deal of money arming themselves. After the disarming of the coloreds, a squirrel gun will do for home defense. Additionally, “gun violence” is mostly a phenomenon fueled by non-whites. Even many of the spectacular spree killings are done by non-whites. The Virginia Tech shooting and the Pulse Night Club shootings were all done by post-Hart-Celler people.[2] One suspects that the recent Parkland, Florida School shooting was also the same, but the info is still forthcoming. Other spree killings tend to be those of “mystery-meat” ancestry. This situation also reduces events like shootouts between the welfare-Africans of the Cabrini–Green housing project and the Illinois National Guard in the 1960s.

Don’t Let the Insane Get Guns

In this hypothetical situation, non-whites don’t get guns at all, so “insane” means insane white people. Yes, there are plenty of conditions and details around the term “insane” and who gets to label someone else insane. Furthermore, I suspect that most spree killers are on some sort of behavioral adjusting medicine. The question is, does the medicine make the shooter want to shoot or did the medicine get prescribed because the shooter was already on the edge? A great deal of study needs to be done regarding this situation and a system aimed at prevention created. In short, pills don’t always work, we need to bring back the mental health institution.

It is important to note that there are two spree shootings involving people with mental health issues that were almost prevented: The 2017 Sutherland Springs Church shooting in Texas and the 2018 Parkland, Florida Shooting. In both cases the shooter was known to law enforcement and known to mental health professionals. Just one more hurdle in the two shooters’ path could have prevented the disasters. We need a national study on why the authorities came close, but failed, to prevent them.

In the same way that jokes about bomb threats at airports are a crime, so too should be false statements about school shootings by school-age or school-attending people.

People who spent more than six months in prison make bad choices in every other aspect of life. While some see the light and turn their life around, most don’t. Those people are a danger to themselves and others. The rights of citizenship come with responsibilities.

It’s not guns in general that is the problem, it is usually one type of gun – the civilian variant of the M-16. Military rifles have always been available to the public. Indeed, the Civilian Marksmanship Program that got 20th-century military rifles to the public started in 1903. Spree shooters just don’t use the Krag-Jørgensen rifles, American Enfields, Springfield M1903s, M1 Garands, M1 carbines, or even M-14s. They’re too heavy and kick too much. Furthermore, most people don’t really know how to clean them or use them.

On the other hand, the M-16 and its many variants have been used by the US Military for longer than any other type of service rifle. The next longest serving rifle used by the US Military is the .69 caliber flintlock. Generations of Americans have learned how to assemble and dissemble the rifle while blindfolded. The M-16 is easy to aim and highly accurate. Its 5.56 NATO round is specially designed to kill humans. The rifle is light and doesn’t kick when fired. It’s the perfect tool for any lunatic to knock off screaming co-eds and cowering cubicle co-workers having a really bad Monday.

My suggestion – make the civilian M-16 rifle go the way of the TEC-9, the weapon of choice during the “Crack Wars” of the early 1990s. Impose a big tax on firms that produce them. Encourage a big licensing fee. Slap an additional sales tax on the consumers. Ban the use of the 5.56 NATO round for hunting. Ban civilian versions with detachable magazines. Keep your guns, but not the M-16 or its variants. It’s the limited, drink but DON’T drive concept. The M1 Garand is a perfect military-grade weapon for the discerning enthusiast. Once that’s done the value of the existing M-16s will increase and they’ll wind up in the hands of collectors who talk about “their rights” while their expensive shooting irons are hid away in safes and closets.

Answer: Yes, that’s always possible. However, as mentioned above, the M-16 is easy and lethal. Other firearms are just as lethal, but harder. The M1 Garand weighs “a ton.” Hits on a target with a pistol get hard around 25 feet, and harder father out. A Krag-Jørgensen is impossible to conceal. Every little bit helps.

Metapolitics works. Yul Brynner’s Public Service Advertisement[4] about the dangers of smoking killed what once was a universal smoking culture. Civic-minded virtuous people should change the culture. Get a ripped, highly masculine movie star to say that only “nuts” buy an M-16 and one should look at a Grade AAA hickory stock, bolt-action…whatever made by the fine gunsmiths from…wherever. Encourage a film where the hero blasts the criminal mastermind with the old Lee-Enfield rifle while saying a memorable one-liner. Dirty Harry made the Smith & Wesson .44, the world’s most cumbersome pistol into a best seller that sits in gun safes, decorates holsters, and isn’t used by spree killers.

The major root cause of spree shootings is that the M-16 is widely available in a civilian variant, but the other minor factor is the ease with which American society produces atomized, alienated individuals. The racial displacement of whites is a central pillar of the latter phenomenon. The roots of white displacement probably started in 1916, when President Wilson appointed the first Jew to the Supreme Court, and by the 1960s the problem was clear but had no name. It should be noted that the first mass shooting occurred not long after the 1964 Civil Rights Act and the 1965 Immigration Act. This was in 1966, when Charles Whitman shot from the tower at the University of Texas in Austin.

Adna Bertrand Rockwell is a distant cousin of George Lincoln Rockwell and a veteran who can assemble and disassemble an M-16 while blindfolded. He is a friend of Greg Johnson and often works out at a Seattle gym with his trainer Kyle.

[3] Nobody get stupid about my calling the rifle in question an M-16 rather than an AR-15 or an M4A1, blah, blah, blah. You know what I’m talking about.