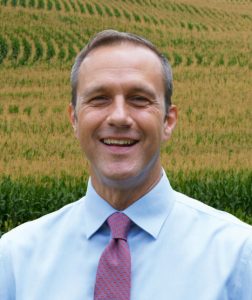 Paul Nehlen of Wisconsin, who will be challenging Paul Ryan in the House of Representatives for the second time this August, reminds me of a line from the great baseball movie Moneyball. After revolutionizing the way baseball is played, yet still falling short in the playoffs, Oakland Athletics General Manager Billy Beane is told by the owner of the Boston Red Sox that “the first guy through the wall always gets bloody.”

For the Dissident Right, Paul Nehlen is that first guy through the wall. And although he is getting bloody, he’s showing no signs of stopping. By shifting the Overton window to the Right, President Trump may have helped pave the way for an explicitly pro-white, pro-West, pro-American candidate like Nehlen. Not only did he personally encourage Nehlen to once again take on Ryan, his civic nationalism has much in common with Nehlen’s notions of “economic nationalism,” namely placing America first in all matters relating to economics, politics, and culture. This last part is crucial since it is where Trump and Nehlen part company somewhat. Both Trump and Nehlen realize the superiority of Western culture over non-Western cultures, but Nehlen takes this further by hinting that culture is not purely ideological or religious, and that it is at least in part related to race. I believe he is the first American candidate for a major office in recent memory to do this. (Last March, Representative Steve King of Iowa did link Western civilization to white people. This, of course, is great, but King wasn’t a candidate at the time.)

Nehlen’s hinting is not terribly subtle. If you have even a passing familiarity with politics these days, it will not take you long to realize that he is truly a different kind of politician. In his Facebook video explaining economic nationalism, Nehlen admitted openly that he is white, which is rather a revolutionary thing for a candidate to do. He also jumped on the recent “It’s Okay to be White” bandwagon (“In fact, it’s better than okay,” is what he actually tweeted). His tweets and posts on Gab are meme-heavy, Alt Right savvy, and thoroughly obnoxious to the Left. On Twitter and Gab, he is basically a righteous troll. For example, on Gab he reposted an image of a group of heavily tattooed and shirtless Latino gangbangers under the heading, “WHITES NEED US.” 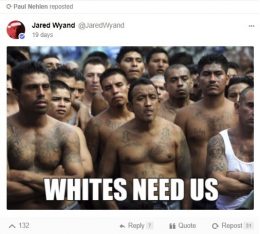 He has also posted Pepe and helicopter memes, and countless JibJab-styled memes aimed to humiliate Paul Ryan. Here’s a good one: 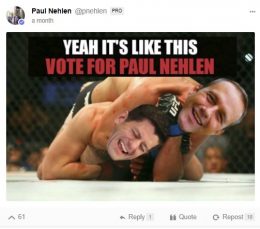 In one post, he tells Paul Ryan to go make him a sandwich.

Paul Ryan Make Me A Sandwich

Nehlen also likes to take on the Jews, or at the very least he is not intimidated by anyone’s Jewishness. After being called an asshole by Jerusalem Post blogger Hallel Silverman, he told her that she should keep her opinions in Israel and not worry about what’s happening in America. He also referred to FIRE attorney Ari Cohn as a “(((bigot))).” And his Twitter spat with Commentary editor John Podhoretz was as hilarious as it was nasty. It basically went like this:

J-Pod: Even Nehlen’s camera knows he’s a ludicrous idiot who lies like he breathes.

J-Pod: So Bannon’s catamite @pnehlen has, in the past 12 hours, suggested I commit suicide and called on me, born and raised in the U.S. but Jewish, to “self deport.”

Nehlen: Who said anything about Jewish? Oh right, you did. It would be more appropriate for you to self-deport to Mexico, were you open borders globalists like to get your cheap labor.

Nehlen: Who would know what a catamite is? A pedophile would, that’s who. I had to look it up, but @jpodhoretz used it flippantly as if it is a term he regularly uses. Please unfollow me, John. You are a perverted old man.

J-Pod: Maybe you should eat something. Your brain needs nourishment. It’s the size of a pea.

Nehlen: Do us all a favor, Podhoretz. Eat a bullet.

It seems Nehlen came out smelling like a rose after that little exchange. Note how Nehlen responded to the catamite charge by reframing the discussion and then shifting seamlessly from defense to offense. That’s some pretty deft intellectual infighting. Note, also, how he has no fear of Jews. It’s easy for anonymous posters and writers on the Dissident Right to be fearless. It’s decidedly less easy for Dissident Right leaders to do the same. But for a serious politician to constantly stick it to high-profile Jews (who definitely deserve it) while refusing to exonerate himself with philo-Semitic signaling, that takes some serious chutzpah.

Here is another example. In a letter to President Trump which he shared on Facebook, Nehlen asks him to free First Lieutenant Clint Lorance, who may have been unfairly imprisoned for the murder of two Afghani men while leading a platoon in Afghanistan in 2012. Nehlen then compares Lorance’s case to that of one Sholom Rubashkin, the owner of a kosher meat-packing plant in Iowa who was serving twenty-seven years in prison for bank fraud before Trump commuted his sentence last year. Surely, if Trump can free Rubashkin, he can do the same for Lorance. Notice, however, the photographs Nehlen provides of the two men: the blonde, bright-faced, and wholesome American versus the hirsute, swarthy, and decidedly unwholesome Jew:

(Rubashkin is, um, the one on the left.)

And if the image of the scheming Rubashkin looks familiar, it should: 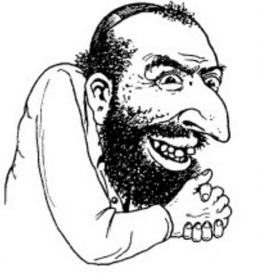 I just can’t believe that this is all an accident. No, most likely, Paul Nehlen is letting American Jewry know that if they have any anti-white or anti-American bias or hair-trigger paranoia about anti-Semitism, they are going to have a hard time with him. At one point, in response to the charge of being a white supremacist, Nehlen responded:

I reject being called a White Supremacist, because clearly Pro-White isn’t White Supremacy unless Pro-Jewish is Jewish Supremacy. https://t.co/oyc5DqVXtd

Hard to beat that logic.

It is my hunch that many of the negative feelings people have towards Jews these days have more to do with fear of them than to what traditionally constitutes anti-Semitism. Judeophobia might be a better term for it, and Paul Nehlen has none of that. It’s refreshing. In fact, he says he fears no one and nothing except God. As for ascribing outright anti-Semitism to Nehlen, I wouldn’t go that far. Although he clearly likes to trigger Jews and call them out on their hypocrisies, he hasn’t evinced any real Jew-hate that I have seen. He’s also a serious soldier-of-God type Christian and seems committed to his economic nationalist ambitions, which, he avers, make no distinction between races and religions. I see no reason why he wouldn’t be willing to cooperate in good faith with Jews if they are willing to cooperate in good faith with him, especially if they wish to put America first. 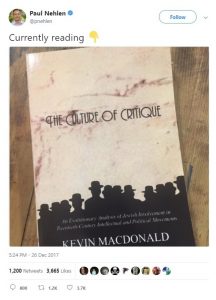 For a serious politician to openly boast of reading Kevin MacDonald’s less-than-flattering treatise on the Jews is almost too remarkable for words. The mainstream media, of course, reacted with hysterics, which, I am sure, is boosting sales of The Culture of Critique as you are reading this. Nehlen better be careful, because by shifting the Overton window farther to the Right than Trump ever did, he might be the first American since Abraham Lincoln to actually break it. And speaking of breaks, many say that it was his The Culture of Critique tweet which caused his acrimonious split with Steve Bannon, who up until that point had been supporting his campaign. Fortunately for Nehlen, this was completely overshadowed by Trump’s own acrimonious split with Bannon. So perhaps by sharing the same rosacea-faced nemesis, Nehlen will stay in the President’s good graces, at least for a little while longer.

Another way in which Paul Nehlen reveals his true colors is by his choice of association. He actually did a fifty-minute interview on Fash the Nation recently. And it’s not just this and his chummy repartee with FTN’s Jazzhands McFeels. It’s also the language he uses. Alt Right terms which Nehlen throws around with a high level of competence include “cuck,” “normies,” “red pill,” and “shoah” (which he uses as a verb). In the interview he refers to Andrew Anglin by his first name, as if he is on a first-name basis with him. Can you imagine any mainstream American politician who is on such a basis with such a figure?

Like Trump, much of Nehlen’s language is blunt and unequivocal, and demonstrates a clear understanding of what’s plaguing white Americans and their allies today. He says he wants to “break the back of the Left.” He also opposes open borders and supports the Wall, because otherwise, “There’s no way to deport people.” Most endearingly, he boasts of a T-shirt he made which features a dog with paws in the air, saying “Paws up! Don’t shoot! Black Labs Matter.” People all over Gab are saying he’s “/ourguy/,” and I see no reason to disagree.

As for his actual policies, Nehlen comes across like Ann Coulter’s dream come true. He’s pro-Wall, pro-life, pro-gun, pro-military, and pro-America. He is patriotic as hell. He also seems to like his social media, and has been promising a federal law which would outlaw the kind of de-platforming and de-monetization we saw after Charlottesville last summer. Basically, he stands against censorship of lawful speech. But what makes this more interesting than just fealty to the First Amendment is Nehlen’s rationale for it. He thinks that such a law could help act as a stopgap against sharia law in Europe. Of course, sharia law is all about censorship, and any nation which gives in to it will find itself having to do without American social media companies such as Facebook, since censorship in the US would be illegal. Maybe this is how it will play out, or maybe not, but you have to admire how Paul Nehlen keeps his eye on the bigger picture.

Paul Nehlen is an engineer and a self-made man. They know him in Wisconsin as a true American success story. He can definitely run a business and a political campaign. But whether this will translate into success in the House of Representatives is another matter. While having Pepe-sized balls in one’s jockstrap is great, it remains to be seen whether Nehlen has it in him to be a great statesman and legislator. I dearly hope he does. Because if he does, there will be many others like him following him through that break in the wall. And thanks to Nehlen, they will get a lot less bloody than he is getting right now.