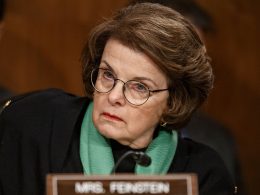 Occasionally an example of an abstract idea comes along that is so perfect, one almost wonders if it was invented, and Dianne Feinstein is such a case. If there is anyone today who embodies our hostile elite–it’s her. Should Whites be lucky enough to one day find a new land of our own, the successful career of California’s current octogenarian senator will be sure to inspire particular shock in students.

Mrs. Feinstein (she has been married several times, and held many different titles, for simplicity’s sake, “Mrs. Feinstein” will be used throughout this piece) first dipped her toes into politics [2] innocuously enough by way of student government when she was at Stanford. After graduating in 1955, she immediately returned to her native San Francisco and married for the first time to Jack Berman [3] in 1956. Mr. Berman was a young Jewish lawyer with quite a few political ties throughout the city, and no doubt was instrumental in getting his wife her first official political position–an appointment by Pat Brown to the Women’s Board of Parole of California. Mr. Berman would go on to earn quite the reputation: a civil rights activist, even going to the South to fight Jim Crow, and an obsessive gambler who frequented Las Vegas. The marriage did not pass the five-year mark.

While the Berman marriage was crumbling, a young black lawyer named Willie Brown from Texas was making a name for himself by defending pimps, prostitutes, and other street criminals. Then in 1961, his career pivoted and he begun a campaign [4] of agitation to abolish “housing discrimination” throughout San Francisco, which garnered the attention and support of the young Mrs. Feinstein.

While Mr. Brown and Mrs. Feinstein were both working to defend criminals, crime across the nation was increasing exponentially [5]–yet both begun rising to greater and greater prominence. In 1964 Mr. Brown became a state assemblyman [6], and in 1968 Mrs. Feinstein joined the San Francisco Committee on Crime. The next year she was elected to the San Francisco Board of Supervisors and soon became its president.

Simultaneously, San Francisco was changing. Haight Ashbury [7] became notorious for its drug-fueled hippie scene and became the destination for runaways, junkies, and vagrants across the nation. Jim Jones and his “People’s Temple [8]” headed to San Francisco as well. Harvey Milk and the “gay rights” agitators of Castro Street [9] were beginning to get organized and hold political and cultural clout. By the 1970s, the city had a reputation of incredible criminality [10]–immortalized by the Dirty Harry films, the first of which was released in 1971.

Mrs. Feinstein and her cohort represented a kind of Cultural Marxist [11] political vanguard throughout all of this, and helped ensure that every destructive trend was amplified. While anti-West students in Paris were trying to launch a quasi-coup [12], San Francisco’s own revolutionary ‘68ers had already seized power. In addition to her complete failure to abate the rising tide of crime while in a position to do so, Feinstein, Willie Brown, and others of their ilk like George Moscone, Jerry Brown, and the aforementioned Harvey Milk managed to abolish legal segregation and ensure the solidification of a San Francisco culture unrecognizable to Middle America.

Throughout it all, this new elite relied openly on Jim Jones and his cult. Mrs. Feinstein lunched with him, Mr. Brown compared him (positively) to Mao, Moscone and Milk won their elections (mayor and city board of supervisors, respectively) because of the People’s Temple’s bloc voting. Moscone apparently enjoyed the miscegenist sex parties Jones threw, which likely helped convince him to appoint Jones as president of San Francisco’s Housing Authority. Meanwhile, Milk kept personal and admiring correspondence with him, once writing, “The first time I heard you, you made a statement: ‘Take one of us, and you must take all of us.’ Please add my name.” The ties between the soon-to-be mass murderer and the rise of San Francisco’s “culture of critique” has always made the left uncomfortable, particularly since the case can be made that none of it would have been possible without the People’s Temple–but it is impossible for them to deny. This entire paragraph can be fact-checked by way of a book the founder of Salon wrote [13].

On November 18th, 1978, after killing Congressman Leo Ryan and four others, the Temple drank the legendary Kool Aid–leading to a death count just shy of a thousand. What could have been a completely delegitimizing moment for the American New Left managed to be completely overshadowed by the media frenzy over Dan White’s assassination of Harvey Milk and George Moscone nine days later. Dianne Feinstein was the one who called the police after hearing the shots, then announced the news to the press [14], and was then sworn in as mayor–after two failed prior attempts to secure the position through election, once narrowly losing to Moscone himself.

Mrs. Feinstein would go on to win a mayoral election in her own right the next year, and then again in 1983. Her city hosted the 1984 Democratic National Convention, and many thought Walter Mondale would choose her as his running mate (a dishonor she lost to Geraldine Ferraro) as a reward for her staunch support of Jimmy Carter four years earlier when Ted Kennedy had tried to snag the Democratic nomination from him.

Her time as mayor came to a close in 1988, but her political career had really just begun. In 1990 she lost [15] her bid to be California’s governor to VDare darling Pete Wilson [16], but two years later (in the so called “year of the woman [17]”) she easily won [18] a special election and became a US Senator. After being spared [19] from the 1994 Republican sweep by the skin of her teeth, she achieved the coveted status of “safe” incumbent. In 2000 [20] she won reelection by almost twenty points, in 2006 [21] it was by almost twenty-five points, and in 2012 [22] it was by twenty-five points. At 81, she is now America’s oldest senator, and it is hard to imagine her stepping down from her position for any reason aside death.

Since she first arrived in Washington, DC, California has not done terribly well. It has gone through a shocking demographic change [23], and maintained high unemployment [24]. Statewide Republican figures now resemble Arnold Schwarzenegger more than Pete Wilson, if they can be found at all. Willie Brown served two terms as mayor [25] of San Francisco and seemed to have been trying to become [26] the Marion Barry of the West; and Jerry Brown managed to become governor, again [27]. Culturally, Jim Jones is considered a quirk, a sort of “lone gunman” unconnected to progressive politics; and while George Moscone has been forgotten, Harvey Milk has been immortalized [28] as a heroic progressive, tragically shot by a bigot.

As a senator, Mrs. Feinstein has proved to be as bad as they get. The labels “liberal” and “progressive” do not even begin to cover it, and even “Cultural Marxist” is at best incomplete; but let’s start with the obvious. The immigration group Numbers USA has given her a “C-” grade [29] for the entirety of her career, but an “F” for her current term [30], and another “F” under “Recent [31]” (i.e. 2011 – present). Given that she arrived in the senate on a fluke election, then saw Newt Gingrich [32] and his acolytes seize congress the same year as Governor Wilson galvanized his base with Proposition 187 [33], it is unsurprising that Mrs. Feinstein thought it wise to feign a somewhat restrictionist stance. Once the 1990s came to a close, however, and the aforementioned proposition was declared unconstitutional, those Numbers USA grades plummet. One could make the case that she was just “going with the flow” of the state’s demographic change, but given her background, I believe it’s driven by something deeper than that.

Mrs. Feinstein also authored [34] the loathsome 1994 federal ban of so-called assault weapons and large magazines that thankfully was not renewed ten years later. In 2013, she pushed hard for a renewed ban [35] that went nowhere. No one would be surprised to see another attempt at this on her part in the next few years; keeping citizens unarmed is clearly an issue close to her heart, stretching all the way back to her time as mayor of San Francisco when she banned handguns [36].

So far, so Democrat, I know. Equally unsurprising, given her ties, is her complete support for everything that advances the march of gay, women’s, and non-White “rights.” Her uniqueness stems from how, unlike so many other died-in-the-wool cultural leftists, she is a staunch and proud advocate of American empire [37].

Under President Clinton she voted “yes” for air strikes in Kosovo and “yes” again to give the president approval to “use all necessary forces and other means” in the same place. Under President Bush II she supported the Iraq War early and often, and then kept on supporting and funding it. Even after the anti-war fervor that led to the Democratic sweep in 2006, Mrs. Feinstein was happily approving hundreds of billions of dollars for Iraq [38]. Of course, she voted to condemn anti-Muslim bigotry in the name of anti-terrorism, too, just in case anybody was worried her militarism was motivated by anything so deplorable as prejudice. Mrs. Feinstein was even so hawkish as to side with the Bush Administration [39] in their attempt to smear MoveOn.org as unpatriotic after that group launched a particularly hard-hitting anti-war ad [40].

By extension of her love for war, she loves the surveillance state as well. She has been a long time supporter [41] of the overreaching FISA courts, and has done her best to make them even more powerful [42]. Naturally, she is also a big fan [43] of the PATRIOT Act as well. More recently she has expressed fear [44] that laws designed to protect journalists from having to reveal, or testify against, their sources might define “journalist” too broadly. On the senate floor she commented [45], “Should this privilege apply to anyone? To a 17-year-old who drops out of high school, buys a website for $5, and starts a blog.” The remark was a thinly veiled reference to whistleblower Julian Assange, who Mrs. Feinstein loathes [46]. Perhaps this should come as no surprise though, back when she was Mayor of San Francisco she expressed a preference for Chinese journalists [47] to American ones, because, “They just write down what we say” – maybe that’s why she loves immigration so much. Of course, when news came of the CIA using some of their more clandestine surveillance techniques on the senate, Mrs. Feinstein was quite miffed [48].

Like everyone of political prominence and nearly all Jews, she is fanatically pro-Israel [49]. But what make her Zionism interesting are her attempts to address the issue of Israel spying on the US, as opposed to just dodging the issue like most everyone else. Last spring, after a surprisingly honest story [50] from Newsweek on the hushed up matter of Israel’s less than satisfactory behavior as an “ally”, an Israeli official vociferously denied that there was any truth to it, and after meeting with him, Mrs. Feinstein said [51], “I accept him at face value.”

Pro-empire, pro-Big Brother, anti-gun, anti-White, and anti-Tradition. They don’t come much worse than Dianne Feinstein. If New Rightists need to point to one figure to demonstrate the existence of a hostile elite, or one figure to demonstrate the failures of conservatism, it is her. A product of Californian progressivism, she has risen to higher and higher respectability through three supposed “conservative triumphs” in 1994, 2010, and 2014, and left her old conservative rivals like H.L. Richardson [52] in history’s wastebasket. She and George W. Bush disagreed on little, but while he managed to sully his party’s name so thoroughly that Barack Obama was elected President, Mrs. Feinstein only emerged from the 2000s more powerful than before. An opposition that has failed to remove, delegitimize, or even meaningfully slow down a figure like Dianne Feinstein is not an opposition worth having. In short: it’s her country, they just vote against it.

As the T.S. Eliot quote [53] Wilmot Robertson was so fond of goes:

In order to possess what you do not possess
You must go by the way of dispossession.