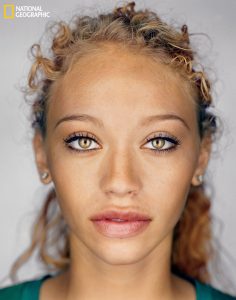 Liberals are set on the expectation of a future where race no longer matters.

The worldview of the liberal progressive is one where the world is fundamentally born in “sin” (patriarchy, racism, etc.) but ultimately redeems itself—inevitably, through the laws of progress—and ultimately takes on a form that is in the end radically different from the form it was born in.

In a theological context, these theses would variously be classified as eschatology [2] and soteriology [3].

Like the apocalyptic Christian, the progressive liberal may not know when the End Times are coming, but he is certain that they are coming, and he knows what they will look like when they come.

Thus, liberal anti-racism combines with the progressive eschatology to create the idea that even if race matters now—even if race isn’t a mere “social construct,” but a real biological phenomenon—it will eventually disappear as we all inexorably meld into a single off-white race.

As a teenager, my first exposure to this idea was in a skit from the Indian comedian Russell Peters [4]:

300 years from now . . . do you realize there’s not gonna be any more white people?
There’s not gonna be any more black people. Everybody’s gonna be beige.
And I don’t care; I’m already beige, you know?
But it’s true—the whole world’s mixing.
Eventually we’re all gonna become some sort of hybrid mix of Chinese and Indian. It’s inevitable—they’re the two largest populations in the world . . . so you can run from us now, but sooner or later we’re gonna hump you. And I’m thinking, if we’re already gonna mix anyway, we should start mixing now, you know?  . . .
But it’s true, the whole world’s mixing. Eventually everybody’s gonna look the same.

Where Peters went on to joke about mixing Jamaicans and Italians to create “little Pastafarians,” mixing people from Holland and the Phillippines to create “little Jalapenos,” people from Cuba and Iceland to create “Ice Cubes,” National Geographic [5] in 2013 recorded the unironic use of “such homespun terms as Blackanese, Filatino, Chicanese . . . Korgentinian . . . Juskimo . . . [and] Blaxican.” This was, of course, in the well-known series of articles [6] showing us what it thinks Americans will look like in 2050.

This is the progressive utopia. They assure us that it’s “beautiful.” And they’re absolutely certain that it’s how their vision of a world where race no longer matters is going to be realized—and why they can rest assured even now that they are on the “winning side of history” while we register angry complaints that will barely even be recorded in the above couples’ childrens’ history books while we come kicking and screaming into this future they envision, whether we like it or not.

Well, I’d like that record to note that they were clearly warned just how naive this really was.

Because there is something very obvious that they haven’t stopped to consider.

It doesn’t bode well for them. And it makes sense that they wouldn’t consider it, given their well-registered denial of the scientific reality that biology plays a significant role in human personality and behavior.

But a meta-analysis of 50 years of twin studies [7], with 14.5 million subjects, found that every behavioral or personality trait that could be identified and measured was around 50% heritable.

What goes for every other trait known to mankind also goes for ethnocentrism, as well.

That’s right: ethnocentrism is heritable. [8] Scientific estimates [9] of its heritability are as high as 55%.

Furthermore, it has been proven more recently [10] that ordinary people instantly become more willing to admit to “racist” attitudes as soon as you give them the notion that they are on the path towards becoming a minority in their country (which they are).

Racist attitudes have been taboo for a long time because many whites agreed that they did in fact hold all of the power—so attacking someone who held none was simply poor form. It was targeting low-hanging fruit. White people generally don’t like bullies, and racist whites were seen as bullies because they were part of their country’s majority. Take that basic premise away, and the gloves are going to come off. That statement is not my personal wish or hope, or even a threat to people whose vision I hope doesn’t come to pass. It’s a proven finding of evidence-based research. It will happen.

So getting back to the point: ethnocentrism is heritable.

What does that mean for the vision of liberal utopia laid out above?

It means the inevitable result of interbreeding is not going to be a post-racial world.

The inevitable result is going to be ethnonationalism.

It’s quite obvious that the least ethnocentric individuals are going to “marry out.”

They will carry their genes for low ethnocentrism with them.

Meanwhile, the most ethnocentric individuals are going to “marry in.” They’ll be the last, if ever, to get swept up in a changing social landscape where intermarriage is something everybody is doing. They’ll be the ones who most often find that they get along best with members of their own race. And they’ll be the ones who least often find that they get along with and find members of other races attractive enough to make it all the way through to the final step of marrying and raising children together.

What we end up in is not an off-white world of homogeneously “beige” post-racial people. What we end up with is a collection of “beige” people who have no instinctive ties of innate affinity for each other, surrounded by increasingly ethnocentric and united members of all races surrounding them.

That is the future we’re headed for.

. . . And again, just like the National Geographic, all I’m doing here is registering relevant facts.