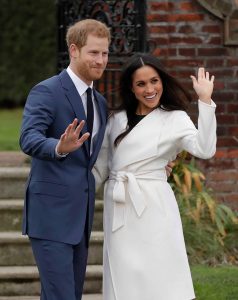 I’ve written before about my peculiar love for the British Royal Family [2]. But I’m now officially out of love, and even tending toward republicanism. The final straw, of course, is the recent announcement of Prince Harry’s engagement to the mulattress Meghan Markle. Let’s sum up the problems: (1) She’s half black, (2) She’s American, (3) She’s divorced, (4) She’s an actress (which, to the Queen Mother’s generation basically meant the same thing as whore), (5) she was on General Hospital (for only one episode, but that’s enough), (6) she’s not that pretty, and (7) to top it off, she’s three years older than Harry. At 36 she is not exactly at her most fertile. Well, at least there’s one slim silver lining in this half-black cloud.

The rumor, however, is that Meghan is pregnant. Only the more questionable rags are reporting this, so there may be nothing in it. If false, it’s probably a function of people’s desire to answer the great why? that surrounds this engagement. It is the most inexplicable royal match since Edward VIII abdicated the throne to marry hard-as-flint Wallis Simpson. This is a man who could have had any woman in the world and he chose . . . this? (I mean both Edward and Harry.) Of course, we do not live in an age of shotgun weddings. And there is a long tradition of male royals producing bastard children (just ask Prince Albert of Monaco). So, there was no compulsion in Harry making this match. Was he compelled by love? One imagines so (at least some form of madness must explain it). But he needs the consent of the Queen to marry, and she could have said no.

We might console ourselves by saying that Harry doesn’t matter much. At the moment, whatever half-breed child he produces will be sixth in line to the throne. And the gap will widen as William and Catherine produce more children (as they are expected to), and as their children produce children. Of course, one could also make the argument that we ought not be caring anything about this family in the first place. Indeed, this is likely what some of my readers are thinking – as well as Counter-Currents readers who saw the topic of this piece and gave it a pass.

Should we give a damn about the royal family? Yes and no. Not giving a damn has to be for the right reasons, however. For years I’ve made a point whenever I meet a Brit of steering the conversation around to the monarchy just to see where they stand. I have yet to meet one who said anything good, but I suspect many of them are telling me what they think I want to hear. I suppose they must think that Americans consider them quite daft for still having a monarchy. The usual pejorative they employ for dismissing the royals is “parasites.” This is hardly fair, considering that royals like the Queen and Prince Phillip and their four children spend almost the entirety of their lives working for the state and for charity. It’s quite clear – especially with the Queen and her husband – that they recognize that with privilege comes a great many duties.

Nor is it permissible for someone on the Right (people like us, that is) to dismiss the royals because (as someone once put it to me) “they actually think they’re better than other people.” This is precisely one of the reasons I’ve always admired them. As I said in my earlier essay on the monarchy, I find it refreshing that somewhere in this treacly age of odious egalitarian mushiness someone still thinks they were born better than others. An egalitarian right-winger is a contradiction in terms: that there are natural hierarchies is one of our basic convictions.

Still, I am torn about one issue. The idea behind hereditary monarchy is that nobility as a quality of character runs in families. This may be true, but it seems to have a way sometimes of skipping a generation – or two or three or four. Perhaps the National Socialist model might be better, where the idea was that certain institutions (like the Napola schools) could be created that would allow natural superiority to display itself, no matter what “class” it sprang from, and be assigned its rightful place in society. (Actually, one doesn’t have to look to the Third Reich for such a model: it’s in Plato’s Republic.) Again, I am torn between the two systems – and, to be still-more-honest with you, I halfway think my support for monarchy has a lot to do with the fact that I take a perverse pleasure in its pissing off the right people.

So, what is a legitimate reason to write the royals off? Well, I can offer two. First, some years ago I confessed my fondness for the royals to a well-travelled British right-winger who I’ve met on many occasions. “I’m quite fond of the royal family,” I said. “Yes, Americans always are,” he replied, with some weariness. When I asked him why he was rather less fond, he explained that the Queen “won’t do anything” about the multicultural catastrophe that is ruining Britain. I defended Her Majesty gallantly: “But she’s a constitutional monarch. She’s not supposed to express political opinions” (which is quite correct – this is how the British system of constitutional monarchy has worked for the better part of two hundred years). “That’s just the point,” replied my friend. “Because the royal family can’t express political views they serve to legitimate whatever or whoever is in power. As such, their influence is pernicious. They are there to give their official imprimatur to whatever politically correct nonsense the government wants to enforce.”

Here was a point I really couldn’t argue with. My British friend was entirely correct. The Queen won’t speak out because she can’t speak out. She must sit back and watch her country fall apart. Or must she, really? It’s asking this question that causes one’s evaluation of the royals to get even dimmer. Because the Queen actually could speak out if she really wanted to – in the 1980s she allowed stories to be leaked to the press about her disagreement with Thatcher’s policy on Apartheid in South Africa. When the Manchester bombing occurred earlier this year it was the Queen and not the PM who visited the wounded in the hospital – Mrs. May citing “security concerns.” I had a reverie when I heard about this. In my mind I saw the mother of an injured little girl say to the Queen “Why are they allowing this, Ma’am? They never asked us if we wanted this!” And in response, I fantasized the Queen taking a breath and – finally – speaking out. I saw it creating (as it would) an absolute sensation. I saw the Brits rallying around the Queen, and the politicians scurrying around like terrified rats.

But, you see, that’s not going to happen. For a couple of reasons. First, you must understand that the monarchy is the Queen’s family business (her father, King George VI, referred to their family as “the Firm”). She doesn’t want to screw things up for Charles and William, and the rest of the brood. Because, gentle reader, if the Queen spoke up, then all the knives – uncountable knives – would be out. Suddenly we would see staunch Establishment monarchists transformed into republicans over night. For the British Establishment – who or what rules Britain – has nothing to do with Garter knights, castles, and the College of Arms. As Oswald Mosley once said [3], “It’s nonsense to say that a British government rules Britain. It’s nothing to do with the British government or the British people. The government of the world is the financial government. The power of money and of money alone!”

The Queen, of course, knows this. Years ago when butler Paul Burrell (who had served Princess Diana) left the royal household, he claimed to have had a lengthy meeting with the Queen, during which she warned him “There are powers at work in this country about which we have no knowledge.” (Burrell’s account of this meeting was widely reported [4] and was never disputed by Buckingham Palace; it was eventually used to exonerate him in a criminal trial.) However, there is another reason that the Queen is never likely to “speak out,” and that is that by all accounts she may very well agree with the diversity baloney.

How else does one explain the Queen’s notorious 2004 Christmas Broadcast [5], with its cringeworthy message of “cultural diversity.” But this should be unsurprising: Her Majesty is a devout Christian. “Love thy neighbor as thyself,” she tells us in that same broadcast. And who is our neighbor? “Everyone,” the Queen says. And how else does one explain her aforementioned objections to Thatcher’s South Africa policy? (The Queen wanted sanctions.) Charles is no better, by the way. But isn’t he a Traditionalist? Yes, but the mushy kind who thinks all faiths (including the cancer of Islam) are equally wonderful. You may have heard that when he is crowned king he wants to be known as “Defender of Faiths,” rather than “Defender of the Faith.”

All this brings me now to my second major reason to write the royals off for good – and back to Meghan Markle.

You see, one reason I (and others) have looked up to the royal family in the past is because I saw them as guardians of tradition and standards. While everyone and everything else was falling apart, they seemed to be the last traditional family, doing things the right way, conducting themselves with dignity and class. By God, they even dress for dinner! But this image of the royals – as maintainers of standards – has been eroding for many, many years. While the Queen has been untouched by scandal, it’s hard to think of any other royal who hasn’t. Things took a big nosedive with Fergie, but she seems like real princess material compared to the coming Princess Meghan. Up until this point one could still say that at least the royal family was untouched by miscegenation – the last bulwark against it (aside from some whispered rumors of a few Semites in the woodpile).

What little credibility the royals had left as the last bastion of tradition and whiter-than-white, stiff upper lip Englishness is now dead and gone. So too is my fondness for them. (And, to all my friends – fine, go ahead, say “I told you so.”) One wonders how the Queen – whose attitudes were formed, after all, in a very different age – is going to feel when she hears the pitter patter of little nappy-headed babies up and down the long halls of Buckingham Palace.

So, why didn’t the Queen tell Harry no? Well, given what I’ve already mentioned it may well be that she has no problem with the match at all. Perhaps she thinks its “progressive.” The absolute worst, most obscene possibility is that the match was actually encouraged by the Queen (or Charles) to improve the family’s image and make them seem more “diverse,” in a “changing Britain.” Almost too terrible to contemplate – but it’s actually quite possible, folks. Truly, it makes me very sad to see another much-loved institution fall to modern decadence. But isn’t it better this way? My British friend was right: the royal family are fully complicit in the system that is destroying their country and most of Europe. And it’s all going to have to come down.

Off with their heads! I will spare only the corgis.