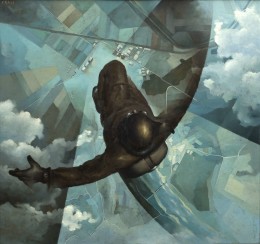 Tullio Crali, Before the Parachute Opens, 1939

November of 2017 was our best month ever in terms of unique visitors: 206,887. It is also our busiest month ever in terms of the sheer volume of articles that appeared on our front page: 91. There have been months when we have had more than 91 articles, but many of those were translations that did not appear on our front page. I want to thank all of our writers, readers, and donors for making Counter-Currents such a success.

In September, we added 71 pieces and more than 1,000 comments to our webzine.

In October, we added 79 pieces and more than 1,000 comments to our webzine.

In November, we added 91 pieces and more than 1,000 comments to our webzine.

In August, Counter-Currents was thrown off PayPal, Facebook, and our web-hosting company. The worst blow was from PayPal, since this put us in a cash crunch. If you would like to help Counter-Currents fight back from these attacks, please consider making a donation. There are several ways to do so.

« The Spirit of Poland