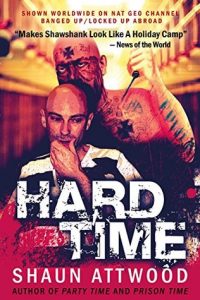 A meme circulating around social media after the revelations of Harvey Weinstein’s behavior said, “If you’re a man, don’t say anything to a woman that you wouldn’t want a man saying to you in prison.”

For my part, I think there’s value in this way of presenting the idea that most women live in a default state of fear of men in general that influences how particular mens’ actions are perceived. No, this isn’t because all men are dangerous—they aren’t. On college campuses, for instance, research finds that the vast majority of rapes are committed by a very small number of serial offenders. [2] But the men who are dangerous disproportionately place themselves in womens’ experiences of the world, precisely as a result of the traits (like psychopathy and impulsiveness) that make them dangerous.

For all the same reasons, even if I really did have an issue that prevented me from bending over, and I really did just need the soap, I would still never even consider asking another man in a prison shower to pick up my soap—because those background factors about what that usually means in context have to be taken into consideration. This chapter excerpt from Mate, written by reformed edgelord Tucker Max and evolutionary psychologist Geoffrey Miller, offers similar points and examples. [3] [4]However, it is important to emphasize how little applicability this meme has to the actual Harvey Weinstein situation. Harvey Weinstein’s behavior was an ‘open secret,’ well-known by anyone close to him in the entertainment industry. [5] The women who only spoke out about Weinstein’s behavior years after the fact while participating in it at the time are as much of a problem as Weinstein himself, and are part and parcel with the degenerate atmosphere swallowing Hollywood. These women were not dependent on Harvey Weinstein for their livelihoods; their only reason to even consider engaging with him at all was their desire to pursue greater fame, and by the time Harvey Weinstein’s behavior was in full force, they knew what the deal was. In practice, their own ego and fame simply meant more to them than solving the problem. They are moral cowards and selfish prostitutes, not heroes and victims.

As Alex Fontana put it in “Weinstein’s Willing Victims [6],”

If these women were stupid enough to let themselves be lured into Weinstein’s apartment or hotel room, especially when his behaviour was an “open secret,” then they had full awareness of the repercussions. I’m not ‘shaming the victim,’ but this excessive pandering to women as though they were incapable of agency or of grasping the obvious quid-quo-pro nature of the proposals is ludicrous. And these female “heroes” who have now stepped forward after Weinstein had been exposed in a major paper are nothing more than ‘fair weather’ cowards whose silence enabled Weinstein to continue his predatory-leveraging onto a never-ending stream of younger and more vulnerable women.

Changing topics completely, one of the most striking things about this meme is how blithely it takes for granted the fact that prison is an environment in which there is this pervasive underlying threat of rape. This is so well understood and obvious to people that this meme was able to become popular by using that fact as a reference point to illustrate something about ordinary human behavior in everyday life. To put it plainly, one thing the popularity of this meme shows very clearly is that nobody cares about men being raped until it can be used as an illustration to tell people how to talk to women.

As Cathy Young detailed in an article in Time [7], there are significant problems with the CDC’s data on sexual assault. For example, all intoxicated sex may have been classified as “rape” by definition. Similarly, many male victims of rape are simply defined out of the picture by classifying rape as ‘being penetrated,’ while throwing being ‘made to penetrate’ into the “other sexual violence” category. Yet, as Young writes,

when asked about experiences in the last 12 months, men reported being “made to penetrate”—either by physical force or due to intoxication—at virtually the same rates as women reported rape (both 1.1 percent in 2010, and 1.7 and 1.6 respectively in 2011).

So, yes, the official data probably underestimates how many total rapes take place in the United States. But the publicized numbers also systematically underestimate how thoroughly represented men are as victims of sexual coercion in the general population. And without diminishing the significance of cases where sex takes place as a result of threats, lies, and manipulation or drug-addled decision-making, cases of rape which are overtly violent from start to finish are clearly both morally even more repugnant and psychologically even more damaging. However horrible the former may be, let’s be real: they do very often take place in relationships where similar levels of abuse are regularly re-occurring on both sides. Quite often, the kind of person who doesn’t end a relationship immediately over a partner blackmailing him into sex is the kind of person who sees this behavior as falling within the realm of generally acceptable behavior, and is not against retaliating in kind—and this goes for both men and women who enter, and stay in, the kinds of relationships where this sort of behavior takes place.

Overtly violent cases—what we might call “gunpoint rapes”—are much, much more likely to be caught and prosecuted since there will be far less ambiguity to an outside party over whether there was consent and at what point it was or was not revoked. Thus, all considered, the official data on the prevalence of rape in the general population is worthy enough for my purposes in this article.

Now on to prison rape.

In total, 5.7% of women and 4.1% of men reported either form of victimization (by other inmates or staff). That‘s only a 40% increase, and again, it’s entirely due to the greater likelihood that incarcerated women will rape—a fact that really doesn’t fit well into any sort of feminist patriarchy theory. With a total of 1,505,000 men and 114,000 women in prison in 2009, we’re talking about somewhere around—by a rough estimate—85,000 men raped in prisons and around 3,000 women.

How many women are raped each year in the general population?

Somewhere around 90,000 [11]. That’s counting all reported rapes, not limiting the count to those that were actually proven and resulted in conviction. [12] And it’s not making any kind of distinction between “gunpoint rapes” and murkier cases. The real number may rise when counting unreported rapes, but it will also fall when removing false reports, mutually intoxicated sex retroactively considered rape because of regret, and other such cases. As Cathy Young pointed out, it will also fall comparatively when removing “manipulated sex” numbers that should be compared not to the number of men who’ve been “raped” in the general population, but to the number of men who’ve been “made to penetrate.” So all considered, it’s a pretty reasonable estimate that should land somewhere close to the middle of a realistic range of the most likely numbers.

Piecing all of this together, we can draw the very reasonable conclusion that approximately as many men are in fact raped in the United States as women, especially once prisons are counted. Indeed, it is entirely possible given the data we have now that accounting for the data on prison rape would actually entail that more men are raped in the United States each year than women. And as other research points out [13],

People tend to look at sexual assault almost exclusively as a crime against women, but this study shows that there is a different way of looking at the crime,” said Felson. Females who are 15 years old are about nine times more likely than 35-year-old females to be raped, and about 4.75 times more likely to be raped than 25-year-old females . . . A 15-year-old boy is more likely to be a victim of a sexual assault than a 40-year-old woman. Young people — both male and female — are the most likely targets of rape and other sexual assaults . . . The most frequent victims of [sexual] assaults are 15 years old, regardless of gender . . .

In other words, it makes more sense to worry about a culture of pedophilia than the Left’s supposed patriarchal “rape culture.”

Furthermore, we can read in the sanitized language of the 2010 BJS report referenced in an earlier link that “White or multi-racial inmates reported higher rates of inmate-on-inmate sexual victimization in prisons and jails than black inmates.” [8] How much higher? Though this report gives the exact numbers and percentages for nearly every other claim it makes, this one is conspicuously omitted.

Crucially, the report also omits the question of who these victims were being raped by.

But we have in fact known what the answer to this question is for decades. One of the single most red–pilling events for me in my entire life was coming from a background where I knew leftists involved in activism, and academics involved in studying, nearly every disparity involved in the criminal justice system imaginable—and yet, not once in my entire life did one of them mention this fact or even display any signs of being aware of it at all, despite the fact that the research is copious and consistent.
As you can read in this research summary [14]:

The fact remains that blacks continually and almost exclusively rape whites in prison. The evidence is based on studies conducted over the last 40 years (Davis 1968; Nacci 1978; Lookwood 1980; Starchild 1990). Why does this white victim preference prevail? Whites continue to be raped more severely and frequently and at a disproportionate rate than any other racial or ethnic group (in Gones 1967; Bowker 1980; Lookwood 1980). This racial inequality may be the largest in any violent crime committed in the United States. . . . Even if the minority of prisoners are black, the majority of victims are white (Sacco 1982, p. 91). When Lookwood (1980, p. 28) asked ‘targets’ to identify their aggressors at the time of their rape, most were black (80%), some were Hispanic (14%), and a few were white (6%). . . . Although many causation factors have been suggested for prison rape, they are all overshadowed by the racial categories of the victims and the rapists. Prison rape has been shown throughout this study to be racially motivated by predominantly black inmates specifically against white inmates who in turn are the victims. . . . racial hatred of whites by blacks appears to be the main force driving prison rape.

To put specific numbers on this, the report notes that studies consistently find that more than 90% of prison rapes are inter-racial and racially motivated. Blacks are found to be some 80% of the perpetrators, and whites are the vast majority of victims. Again, this is easily accessible in a peer-reviewed report published at a mainstream outlet. (So how are desegregated prisons working out for us now, huh [15]?) Can you connect the dots now? THIS is what political correctness means. “Political correctness” doesn’t mean making everyone use polite wording and asking people not to be mean. “Political correctness” means that because we won’t openly acknowledge the reality of the problem, white men raped by black men are literally one of the largest—and very possibly even the largest—category of sexual assault in the entirety of the whole United States, and you’ve been so ill-informed about this fact that I would sound like an alien if I were to say so in public, even though it is absolutely true.

Let me repeat that one more time so it sinks in: One of, and possibly the single largest demographic category of rape in the United States is the rape of white men by black men.