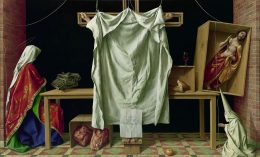 We are alone. Nature, the Old Gods, our
Beloved Ancestors have left us far
Behind and far below. Get used to it,
Folks. We’re on our own. Deal with it. Commit
Yourself to this and to the folk that you’re
Part of, here and now. No more ancestors
But ones we ourselves might become before
We pass the bright torch we received unlit.
We are alone.
No one’s coming to help anyone or
Anything, no matter how we treasure
The Folk Ways, the Old Gods. The past’s unfit
To serve the present; we must take the bit,
Raise folk who only seek our future. For
We are alone.

Time will not hold us accountable, we
Have not hesitated, have not condemned
A future to darkened dawns. History
Will show that we have fought through the night, and
We have never given up for lack of
Hope. Nor shall we ever. We do not grow
Weary or lose our heart. We have enough
Faith, which gives enough inner light to show
What lies beyond the lies this blackened world
Says must be so. We would never, and will
Never, acquiesce to what has come hurled
At us, dressed as truths, to break us until
We lose our sense of what each day to be
Will be. Victoriam sola fide.

Coming Upon a Gate

An old picket gate: its wooden slats half
Rotted, stands straight with determination
But blocks nothing except some buttercups
And bittersweet nightshade. There was a path
On which this gate sat. One that direction
Was not the purpose of — it wandered up
And down these hills, between the far flung farms
And furrowed fields that filled this place. Meadows
Have reclaimed it all now. The farms are gone.
The fields are fenceless. Still, there is a charm
And beauty here, as far as wildness goes—
And a sense that what once was here moved on
Past the traces of itself that we find,
Leaving only the picket gate behind.

The Song of the Cowards

The idea that you can somehow remain
aloof from and superior to the struggle . . .  — George Orwell

We’re not cowards; we’ve figured it’s best to
Pretend like we just lump along and do
Nothing, even though we believe in what
We think is worth committing to. We’re not
Able to, though, we’re not people like you.
We’re people who have jobs, have lives and who
Have to be so careful. What with taboo
And social conditioning, things get fraught.
We’re not cowards.
Being doxed, being outed, would unglue
Our place in the world; people misconstrue
Everything. We have families. White men ought
To fight for things, but for right now we’ve thought
That discretion’s best. We can’t commit, though
We’re not cowards.