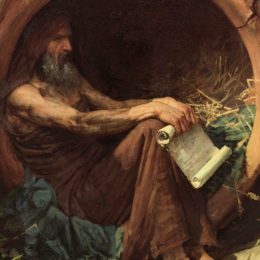 Scholars still debate whether Antisthenes, a disciple of Socrates, was the founder of the Cynic movement. They agree in any case in recognizing his disciple Diogenes as the most influential figure in this movement which, even though it never had an institutional character, continued to thrive until the end of Antiquity.

The Cynic way of life[1] [2] contrasts spectacularly not only with that of non-philosophers, but even with that of other philosophers. The other philosophers, indeed, differ from their fellow citizens only within certain bounds, for example because they dedicate their life to scientific research, as did the Aristotelians, or because they live a simple and private life, as did the Epicureans. The Cynic’s break with the world is radical. He indeed rejects what men consider to be the elementary rules and indispensable conditions for life in society: cleanliness, respect for manners, politeness. They practice a deliberate shamelessness, masturbating themselves or making love in public like Diogenes or Crates and Hipparchia.[2] [3] He does not bother himself at all with social proprieties and public opinion, despises money, does not hesitate to beg, seeks no stable position in life, is “a homeless exile, to his country dead, a wanderer who begs his daily bread.”[3] [4] His knapsack contains only the minimum necessary for survival. He does not fear the powerful and expresses himself in all places with a provocative freedom of speech (parrhesia).[4] [5]

From the viewpoint of the problem which interests us, the exact nature of philosophy in the ancient world, Cynicism is a very revealing example, because it represents an extreme case. An ancient historian [Diogenes Laërtius][5] [6] asked whether Cynicism could be considered a philosophical school, or whether it was only a way of life. It is true that the Cynics — Diogenes, Crates, Hipparchia — did not provide a scholarly teaching, even if they could, sometimes, engage in a literary activity, notably poetry. They nonetheless form a school, insofar as one can identify between the different Cynics a master-student relationship.[6] [7] And, throughout all Antiquity, there was agreement in considering Cynicism to be a philosophy, but a philosophy in which philosophical discourse was reduced to a minimum. We recall for example this symbolic anecdote: when someone claimed that movement did not exist, Diogenes contented himself with getting up and walking.[7] [8]

Cynic philosophy is solely a lifestyle choice, the choosing of freedom, or of total independence (autarkeia) with regard to superfluous needs, the refusal of luxury and of vanity (tuphos). This choice obviously implied a certain conception of life, probably defined in discussions between master and student or in public speeches, but which was never directly argued in theoretical philosophical treatises. There are indeed typically Cynical philosophical concepts, but they are not used in a logical argumentation, they serve to define the concrete attitudes corresponding to this lifestyle choice: asceticism, ataraxia (the absence of worry), autarky (independence), effort, adaptation to circumstances, stolid indifference [impassibilité], simplicity, lack of vanity (atuphia), shamelessness.

The Cynic chooses his way of life, because he considers that the state of nature (phusis), as can be seen in the behavior of animals or children, is superior to the conventions of civilization (nomos). Diogenes throws away his bowl and cup when he sees children who can get by without these utensils, and he is comforted in his way of life when he sees a mouse eating a few crumbs in the dark. This opposition between nature and convention had been the subject of long theoretical discussions in the Sophistic era, but for the Cynics, it was no longer a matter of speculation, but of a decision which committed one’s entire life. Their philosophy is therefore entirely made up of exercise (askesis) and effort. Because the artifices, the conventions, and the conveniences of civilization, luxury and vanity, soften the body and the mind. That is why the Cynic way of life is made up of an almost athletic-style training, though reasoned, to bear hunger, thirst, bad weather, in order to gain freedom, independence, inner strength, lack of worries, and the tranquility of a soul able to adapt to all circumstances.[8] [9]

Plato is supposed to have said that Socrates was “a Socrates gone mad.”[9] [10] Authentic or not, the expression invites us to reflect. In a certain sense, Socrates prefigures the Cynics. The comic poets also made fun of Socrates’ external appearance, of his bare feet and his old cloak. And if, as we have seen [in a previous chapter], the figure of Socrates merges in [Plato’s] Symposium with that of a begging Eros [the god of love], Diogenes, wandering homelessly with his poor knapsack, is he not another Socrates, the heroic figure of the unclassifiable philosopher and stranger to the world? Another Socrates, who also considers himself to be charged with a mission, that of making men think, to denounce, by his biting attacks and by his way of life, their vices and errors. His concern for himself is inseparable from a concern for others. But if the Socratic concern for oneself, by enabling inner freedom, dissolves the illusion of appearances and pretenses caused by social conventions, it always keeps a certain smiling urbaneness which is lacking in Diogenes and the Cynics.

[1] [11] [Hadot lists several French-language sources. English-language sources include Diogenes the Cynic (trans. Robin Hard), Sayings and Anecdotes, with Other Popular Moralists (Oxford University Press: Oxford, 2012), Various (trans. Robert Dobbin), The Cynic Philosophers from Diogenes to Julian (Penguin: London, 2013), and R. Bracht Branham and Marie-Odile Goule-Cazé (eds.), The Cynics: The Cynic Movement in Antiquity and Its Legacy (University of California Press: Berkeley and Los Angeles, California, 1996). The Roman historian Diogenes Laërtius, not to be confused with Diogenes the Cynic, is one of the main sources for the philosopher’s life and works, notably in Book VI of his Lives of the Eminent Philosophers, a translation of which is available on Wikisource [12].]