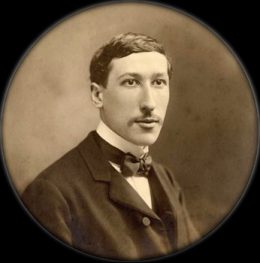 René Guénon was born on November 15, 1886. Along with Julius Evola, Guénon was one of the leading figures in the Traditionalist school, which has deeply influenced my own outlook and the metapolitical mission and editorial agenda of Counter-Currents Publishing and North American New Right. (For a sense of my differences with Guénon, see my lecture on “Vico and the New Right [2].”)

This relative handful of articles does not give a true sense of Guénon’s importance, for along with Evola, Nietzsche, and Spengler, he is also one of the most widely mentioned [13] thinkers on this site. It is a presence, and an influence, that will only grow in time.

. For a judicious overview of Guénon’s works, see The Essential René Guénon: Metaphysics, Tradition, and the Crisis of Modernity [15]

. My personal favorite among Guénon’s books, and the one the provides the most “empirical” access to the idea of Tradition, is Symbols of Sacred Science [16]

For a brief biography of Guénon, see Robin Waterfield, René Guénon and the Future of the West: The Life and Writings of a 20th-Century Metaphysician [17]. For an interesting and readable historical/journalistic account of Traditionalism, see Mark Sedgwick, Against the Modern World: Traditionalism and the Secret Intellectual History of the Twentieth Century [18]