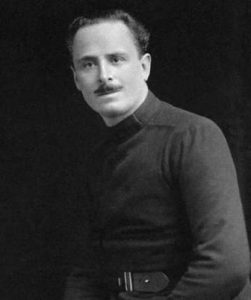 We’re at a strange new moment in history now, when figures such as Mosley can be honestly appraised without our falling into cant or parroting someone else’s hobby-horses. One indicator of this is the tsunami of books related to fascism and far-right nationalism. Some of these are concerned with present-day “alt-right” matters (e.g., George Hawley’s Making Sense of the Alt-Right [2]; Angela Nagle’s Kill All Normies [3]).

Others are stuffy, scholarly, overpriced tomes, such as those in Routledge’s vast and pretentious current list on Studies in Fascism and the Far Right [4]. (Check out these Routledge ones if you haven’t yet; their titles are hilarious. Tomorrow Belongs to Us—The British Far Right since 1967; Marketing the Third Reich; Understanding Racist Activism: Theory, Methods, and Research. And of course Fascist in the Family, a touching but screwy biography of leading Blackshirt and sometime Labour MP John Beckett, which I reviewed here [5] back in May.)

And finally and oddly, we have books that just happened to have been written and published without any reference to current-day political movements. Books such as The Six: The Lives of the Mitford Sisters, by Jessica Thompson, or Searching for Lord Haw-Haw [6] by Colin Holmes, both of which came out in 2016 but were years in the making.

Strictly speaking,.the Dorril book on Mosley is a reissue, having been originally published in England by Penguin in 2006, at which time it garnered a lot of ink in the review columns. Dorril had accessed freshly released MI5 files, showing that Mosley’s organization had received about £50,000 from NS Germany in the late 1930s. (Supposedly the modern equivalent of £2 million. See Daily Telegraph story here [8].)

And therein hangs a murky tale.

Mussolini’s people cut off their subsidy to the BUF in 1937 because of the ineptitude or corruption they perceived in their British colleagues. For years, the Italians generously subsidized the Mosleyites, but the British Fascists failed to elect a single Member of Parliament. Which is odd on the face of it, given that both Sir Oswald and his first wife had been high-profile MPs during the 1920s. But by 1937, Mosley and his followers could not even make a decent showing in London council elections.

The Italians suspected their money was being squandered—or embezzled. And misappropriation within the BUF seems likely. (“MI5 files released last week at the National Archives in Kew . . . show that Mosley’s trusted lieutenants embezzled at least £100,000 at today’s values,” wrote the Telegraph [8] in 2006.)

Sir Oswald himself seems to have been blameless. When the Italians cut him off in 1937, and the Germans hadn’t yet come through, Mosley mortgaged his family estate to meet payroll obligations.

The real takeaway in the Dorril book is its explanation of why Mosley’s top speechmakers and propagandists, William Joyce and John Beckett, left the BUF in 1937 to found their own minuscule National Socialist League. For many decades, going back to Rebecca West’s The Meaning of Treason (1946), the standard story was that Joyce left Mosley in a personal snit or temper tantrum.  But according to Dorril’s Blackshirt, finances were the key. When Mussolini stopped subsidizing the BUF in 1937, Sir Oswald axed most of the BUF’s 143 salaried employees, and that included senior officers Joyce and Beckett. By the time German funds had come in to fill the gap.

Blackshirt is very good at following the money through BUF ledgers. Often it reads like a political biography as written by a chartered accountant:

The Charing Cross Westminster bank account was closed in May 1937. The total Italian subsidy, which includes money not banked in the Charing Cross account, was £234,730, worth around £8 million in today’s money. A.B. Findlay handled the final cash subsidy for 1937 of £7,630, not greatly different from the previous year for the same period. BU expenditure for the year dropped to about half the usual amount. Special Branch reported that Mosley was shocked by Mussolini’s decision, which plunged the movement into a series of internal crises from which it never recovered.[1] [9]

What comes through loud and clear is that the Blackshirts were tracked and infiltrated from beginning to end. This was done so thoroughly that Mosley often appears to be little more than a decoy-duck, luring energetic nationalists into an organization that might have had nice uniforms and pretty rallies, but was utterly ineffectual.

This is not to say that Sir Oswald was consciously participating in the scam. But he was a vulnerable personality: vain and naïve, blind to danger, cocksure that he could outwit everyone. Similar to George Lincoln Rockwell, he honestly believed that policemen and government investigators were his natural allies, and that the people at large would always have his back. Like many an egotistical politician, Mosley was easily manipulated, all too ready to believe that he was using the people who were using him.

Principle was not his long suit. He did not scruple to modify his speeches and political platform, for the right price. The classic example here is the BUF’s treatment of Jewish Question. Initially the Blackshirts (following the Fascisti in Italy) took no stand on the JQ and in fact had prominent Jewish supporters. But then it looked as though fat subsidies might be coming in from National Socialist Germany, so Mosley adopted an anti-Jewish line.

Disappointingly, the publishers who reissued Blackshirt didn’t think to proofread the earlier version for errors that the original publisher, Penguin, let slip by. Nowadays authors are expected to do their own copyediting and fact-checking, even with major trade publishers, which means they can show their ignorance or libel dead people with abandon.

And some of Dorril’s misstatements are extraordinary. At one point he describes Churchill in early 1940 as “First Sea Lord,” which Dorril apparently imagined was a kind of nickname for First Lord of the Admiralty. Then there’s a scene with John F. Kennedy meeting Unity Mitford in Munich in early 1939. He writes his Ambassador father in London that Unity has “a certain fine Aryan look.”

I wondered why I’d never read this astounding encomium before, but after some digging around discovered it was really JFK’s brother Joe, Jr. who had tea with Unity. And what Joe wrote wasn’t nearly as nice: “She is not at all pretty, with very bad teeth, and terribly fat, however with a certain fine Aryan look.”[2] [10]