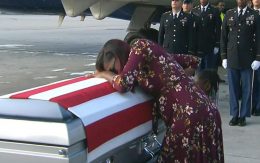 “Myeshia” Johnson at the casket of her husband “La David” Johnson

On October 4th, 2017, four Special Operations Forces soldiers were killed in an ambush in the African nation of Niger. Among the fallen was a single black soldier, Sergeant La David T. Johnson. When President Trump called Sgt. Johnson’s widow Myeshia Johnson to offer his condolences,[1] [2] the president was claimed to have been “insensitive” and “disrespectful” by the Negro Congresswoman Frederica Wilson. Congresswoman Wilson said she’d secretly listened to the condolence call “on speaker” at the receiving end. The allegations created a racial affray and a media firestorm. Responding to these allegations eventually involved much of the Trump Administration’s White House staff.

There is much to unpack about the ambush, and actions of the soldiers in Niger during the fight are irrelevant. Indeed, Sergeant Johnson could have been 100% valorous during the ambush. The racial firestorm from the ambush in Niger highlights four concepts:

Black troops did serve in small quantities in the Revolutionary War. However, throughout most of the time of the early US Republic blacks were barred from military service. Negroes were only allowed to join the military in large numbers during and after the US Civil War. Since then, blacks have done uneven service. While there are a great many valorous and efficient black soldiers and leaders, there are also tremendous problems that wouldn’t exist with all-white units. The usual problems with blacks involve crime and mutiny, but there are also strange and unforeseen problems when employing black soldiers. The first strange and unforeseen problem occurred during the Civil War. The use of black troops in the Union Army caused the breakdown of prisoner exchanges between North and South. This led to the disease-ridden Andersonville, Georgia POW camp (among others).[2] [3] The racial firestorm from the Trump’s condolence call is just the latest in a long line of Things That Break when using blacks in a white institution.

Unpacking the Racial Problems Resulting from the 2017 Niger Ambush

Americans are uncomfortable with black soldiers getting killed in the line of duty.

This discomfort regarding fallen black soldiers dates from at least the Civil War. At the 1864 Battle of the Crater, the original shock troops of the Union Army attackers were expected to come from a black division that had been training for the attack for a considerable time beforehand. The black division was switched out with a white division exhausted from months on the frontlines at the last minute. The Battle of the Crater turned out to be a terrible Union defeat.

Union General Ulysses S. Grant expressed this quite frankly in his testimony to the Joint Committee on the Conduct of the War:

General Burnside wanted to put his colored division in front, and I believe if he had done so it would have been a success. Still I agreed with General Meade as to his objections to that plan. General Meade said that if we put the colored troops in front (we had only one division) and it should prove a failure, it would then be said and very properly, that we were shoving these people ahead to get killed because we did not care anything about them. But that could not be said if we put white troops in front.[3] [4]

In other words, General Grant was willing to lose a battle (and a great many experienced white soldiers) rather than suffer too many black casualties. Americans are uncomfortable with black soldier deaths because Negroes aren’t really part of the American Nation. The only two places Negroes occupy in the American story is as metaphorical slaves on the plantation (or football players in the NFL, voters for the Democrats, etc.) or that of a child-like object of pity. In the later circumstance, Negroes are something like endangered panda bears for whites to coo and cry over. Negroes can’t be really be used in a risky way in Petersburg in 1864 or in Niger in 2017.

In the Narrative of America, Negroes can only be a metaphorical slave on a plantation or an object of pity for liberal whites. [6]To further unpack. As child-like objects of pity, Negro casualties in battle don’t compute. A fallen soldier is a Christ-like figure in the story of a nation. The phrasing involving war casualties drips with religious ideas. For example, American troops were “sacrificed” at Omaha Beach on June 6, 1944. As Patton’s weather prayer[4] [7] said, like Jesus Christ, through their sacrifice, American troops, “. . . establish[ed] Thy justice among men and nations.”[5] [8] Indeed their graves in Normandy are marked with crosses — not the traditional American “Civil War type” headstone.[6] [9]

Admittedly, the actual historical American troops in World War II were not Christs with M1 Garands, but the story of sacrifice rings true in a mythological sense. Child-like objects of pity can’t fill the Christ-like role.

The fallen soldier as Christ theme is part of a larger social phenomenon. War has rituals that help the society absorb the tremendous sense of loss. Putting flags on Veterans’ graves, the Gettysburg Address and other funeral orations, the church services, and twenty-one gun salutes are also expressions of shared tribal grief. It is simply impossible for Negroes to really be part of such an intimate white community endeavor. Shared grief requires empathy. The problem, is that while whites can empathize with black grief if they choose, but blacks can’t empathize with whites at all. Whites, even liberal whites know this in their bones. Essentially, it’s the story of the O. J. Simpson jury being unable to empathize with the white people Simpson killed, the World Star Hip Hop videos of blacks howling like happy apes after a white pensioner is knocked unconscious from a sucker punch, or the proverbial integrationist judge murdered by blacks on the subway. Indeed, while whining and weeping over President Trump’s alleged “disrespect,” Congresswoman Wilson fails to even acknowledge that more whites fell in the ambush in Niger than blacks.

I wrote about this in my article called, An Unhealthy Adaptation: What Cozzens’ Guard of Honor Tells Us About Race & the US Government.[7] [11] I wrote, “Cozzens shows in Guard of Honor that keeping one eye open for racial explosions on the part of black agitators meant that there was less of an effort being made on strategic matters.”

Several strategic questions about Niger that are not asked in the racial “disrespect” dust-up.

There is no cross-racial interaction which does not carry the risk of a racial explosion.

To be charitable, Congresswoman Wilson might by cynically using her knowledge of “the [black] community’s” dislike of President Trump to give herself more political power. She could also understand that blacks don’t fit into white society’s war rituals that manage grief and is thus rationally reacting to that situation. To be uncharitable, Congressman Wilson and the unfortunate widow Myeshia Johnson might be so wrapped up with anti-white hatred that a condolence call can be interpreted by them as disrespectful no matter what tone the President used or what the President said or failed to say. To be even more uncharitable, one or both Negroes might not have the intellectual comprehension to understand the nuance of what the President said and thus interpreted the statement as “disrespect.”

The good news, if you can call it that, is that if a condolence call is so misrepresented and misinterpreted than this entire multicultural morass is about to collapse.