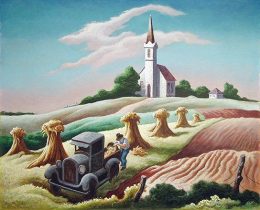 A discussion on a recent episode of The Daily Shoah [2] brought up a topic on which everyone has an opinion but that rarely ends well: Christianity and the Alt Right. The discussion unearthed what I suspect many in this metapolitical struggle think about religion. Perhaps the most notable moment is when Mike Enoch says:

. . . really, what you need is a source of motivation and inspiration, and anybody that’s involved in these politics has that in spades already . . . if you’ve done the work to reconcile your faith and your politics, then I’m not going to go and drive wedges there.

For many of us, the attention that would otherwise have gone into deep questions about life and death, or toward actual religious practices has been funneled into politics with the Trump campaign and the rise of the Alt Right. I certainly was putting more time into reading books and absorbing other educational material before 2016.

The kind of mentality that brought someone like me to this movement was a combination of deep questioning, anger, and a sense that things could be put right through knowledge and will. I listened to those old William Pierce recordings and then sought to understand the Jewish Question. I read Codreanu’s For My Legionaries [3], wrote down several of his observations, and posted them on my wall. This was not so much to remind myself that those words existed as to inscribe them into my memory and being through repetition. The act of writing something tangible on paper rather than just producing transitory combinations of digital script is a worthwhile exercise. I wrote various symbols on my skin to later be washed away, just as a small ritual to reinforce to myself why I am here and what I am on the Earth to accomplish.

One of the realizations I have made in debating leftists is the way they project their vision of a utopia onto White Nationalists. They believe we are seeking a beautiful, white world with white families, driven by nostalgia for the past wrapped up in a fascist aesthetic. I suspect this is the case for many people. But while the leftist seeks a ‘better’ future with less suffering, less cruelty, more hedonism, and unlimited charity, they continually postpone their fantasy into the future while finding oppressions to condemn. If we on the right merely wanted our own version of utopia, would we be much better?

What makes us wiser is our capacity to base our worldview on nature; not just to try and weave reality into our dreams, but to make our dream the perpetual overcoming of resistance—the wings of a butterfly inside his cocoon demanding the life that awaits on the outside. This should be the first red pill; that an austere evolutionary cauldron always removes the unfit and ugly just as assuredly as water poured from a rooftop will land on the ground below.

“War, having become a nuisance, now thrives in the shadows” as Mishima put it [4]. If evolution is true, as mainline atheists love to remind their imaginary creationist antagonists, then competition is a permanent feature of human life. This is just as much the case for middle school children as it is for Jihadists and nuclear-armed nation states. If the Earth’s territory is limited, then many peoples’ DNA will be eliminated as human history continues.

At the Catholic Church I used to attend every Sunday as a kid, I remember one of the older priests ending a sermon by giving a simple warning: whether your destiny is in Heaven or Hell, where you end up is eternal. I maintain an image he gave us another time; that the amount of time spent in this life here on Earth will feel like the blinking of an eye when with the angels in Heaven. This leaves a child in the pews with an unambiguous message on how to live his life. The old man lost the use of his voice a few years later.

But then what happens in school? The elementary school I went to was largely white—but not entirely. It was predominantly Christian, and from what I remember there was a plurality of Catholics. But there were obviously kids of different backgrounds who did not go to a Catholic Church. Worse yet, there were kids whose parents might have brought them to Church on occasion, and yet did not take their teaching seriously! Is a child supposed to believe that most of his peers are going to Hell—a real place where one’s soul experiences eternal suffering? Seeing the Stations of the Cross where images portray the blood of a man whose hands and feet have been nailed through was possibly the only adult-sanctioned depiction of violence I saw from a young age. The afterlife as conceived of by Christians was real to me, and the possibility that anyone would question that was something I could not grasp.

It isn’t until adolescence that people start to inform you that there are things about the secular world that do not mesh with your religion. Sex is going to tempt you, is basically what we were uncomfortably told by adults whom we suspected of probably being hypocrites anyway. When I was fifteen, we were shown an awful video depicting a boy disobeying his father. The boy takes a boat out onto a lake while his father is setting up a tent, only to be attacked by an alligator. The father is shown being hoisted onto a stretcher as the boy begs him not to die.

“Son, if you love me . . .” the father manages, “do what I tell you to do.” This is an awkward way to instruct teenagers, to put it mildly. To inspire young people to be committed to their faith, would it not have been much wiser to show them how depraved the secular world was? We were all supposed to be patriotic and religious at the same time. But what do you do when the two conflict?

For most people, the two simply merge subconsciously together into a kind of universalist, identity-negating, inoffensive, secular Christianity that possesses absolutely no power to guide one’s life. This effete kind of religious training is absorbed into all the corporate platitudes about diversity. The teachers tell you one thing, parents another, the priests yet another, and they all end up merging into a singular plain slave morality. It is rule number one of the kindergarten classroom: Be Nice.

I know a Buddhist who will not kill anything (even ants) in order to keep his heart from hardening. But he still eats the flesh of slaughtered beasts when it satisfies his hunger. He still thrives on the rearrangement of energy found in other organisms. Others refrain from eating meat at all to keep from contributing to the deaths of animals. But then aren’t the lives of many of these animals owed to their eventual consumption by hungry humans in the end? Responsible animal-rights activists will warn people to neuter their animals to prevent the births of miserable, hungry, ill-cared for offspring. But if one has to nullify the biological imperative of a creature in order to end suffering, what is the point of ending suffering?

We will not end suffering or death, which is to say; we will not end competition. I think this is the first and last red pill: that we are cursed with an imperative to grow. When imbued with religious teaching and then contemplating the possibility that there is nothing there after you close your eyes for the last time, you have to find a way to make the years in front of you last forever. Something must take its place.

Last year while debating a leftist friend of mine, I considered what it would take to make me walk away from our cause for the rest of my life. I figured that it would have to be some kind of experience that was so powerful that I stopped caring about anything physical. It would have to be a religious experience so strong that I no longer cared about anything in the world—my identity, human history, my friends and family, my hobbies, or the various places I have called home. But what would this even be? We already strive for the greatest beauty we know, and the most complex thing we know to exist: our race, and what our race will become in the future.

That Church I attended also had a younger priest. He was a well-liked middle-aged guy who had a talent for delivering thoughtful sermons, and then talking amicably and informally with parishioners when the mass was over. I was sitting in the back, looking towards the altar where he stood speaking calmly to a mostly older audience. He said that all fear is ultimately the fear of death. I am not that child sitting in the pews anymore, and I no longer believe what I was taught in Church. But he is still right.