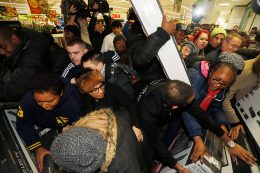 Many White Nationalists say America is becoming nothing more than a place to shop. This is especially true on that quintessential American holiday: Black Friday.

Getting hold of one of the clerks was something of an art, since they were all fully engaged with one customer or another. Oceans of people streamed in and out everywhere, and sooner or later one of them would wash up against any clerk in sight. I was not there to buy anything because I have everything that I need. On second thought, I wanted one of those tight zip top sweaters with a rippled collar that sort of clings to your neck in a strange way, but I didn’t see the point of looking for one that night because it was too much effort to squirm past the multitudes of people. I could have looked at more accessible items, but I didn’t see the point of buying something that I didn’t want simply because it was on sale. I had sort of ended up in this mall by an accident anyway — well, not so much an accident but because friends dragged me there.

I interrupted a clerk at a register to ask where the restroom was. I followed her vague direction as I walked among the masses of people. They were mostly in their 20s — all eager young soldiers of consumer capitalism. As I got to the area of the food court near where the bathrooms were located, I was surprised to see that I was pretty much the only white guy there. Hordes of people from the Indian subcontinent and East Asia made the place feel more like a citizenship class than an American mall. And who’s to say it wasn’t a kind of citizenship they were seeking? After all, the primary purpose of life in America is to earn and spend money. A certain degree of earning and spending of course isn’t bad. After all, the Bronze Age expansions were primarily predicated on an increase in material wealth. However, bronze age culture involved more of a spread of metallurgy, wagon building, and other creative crafts than simply working a standardized cube job or eating up real estate and then splurging on pre-made prole wear. What’s more, during the bronze age the newcomers were Caucasian like the indigenous European Farmers they met.

Anyway, the over-representation of recent immigrants in the mall was so alarming that I started to think that maybe they were better representatives of consumer capitalism than the average white person. Maybe they were buying into the program more and as such were better American citizens in this consumerist America of the 21st century. I can see now why corporations are so adamant about supporting mass immigration. If you think about it, long-term residents of the nation are probably more likely to patronize family-owned businesses and less likely to be good patrons of the corporate stores.

There was a line to the bathroom, and I felt like complaining to the guys next to me about there not being enough toilets, but I doubt whether they would have understood what I had to say because they all seemed to be speaking in a foreign tongue. The guy behind me had that fresh off the boat look, being from somewhere in East Asia. The guy in front of me seemed like he was from India or Bangladesh. Even if they could understand English, I had a feeling they wouldn’t get my sense of humor, so I gave up on saying anything at all. They all stood there so silently and piously, as if they were in a church waiting for communion. It was just a damn mall! Why were they so pious?

After leaving the bathroom I noticed the gaudy glamorousness of the food court. It had high ceilings and marble walls shimmering with the flickering fire in grand fireplaces. It seemed farcical to me. It was just a place to buy proleish brand names.

I saw a poor South Asian chap walking next to me. He was helplessly nerdy and looked like a darker version of the Virgin from the Chad Virgin memes. It makes sense for a “Chad” with a v-shaped torso to splurge on every variety of modern style because they would go a lot further on him than the fellow in front of me. After all, the man makes the clothes more than the clothes make the man. And the clothes have more potential to “make the man” the more man there is to begin with.

I finally saw a few white kids. One had clear skin and was somewhat tall with very finely shaped nose having a high root that met his brow with perfection. He was undoubtedly the product of American nobility doing what noble Americans do: buying expensive stuff. It seems as though the price of being so well-born is that one must dress impeccably well to match his features, and that involves spending a lot of time shopping. In that sense, good looks are almost more of an obligation than a blessing.

As I walked along I spied several homely women staring at me. I always get a lot more looks from them than beautiful girls. I suppose in the mating game the former have a demand-driven strategy and the latter a supply-driven one.

Finally, we were ready to go, and of course I couldn’t find the car. Every space was filled, and the endless rows of cars in the lot seemed like millions of cracks in a dried-out lake bed. My horn must have become extremely quiet because I couldn’t hear it when I pressed the button on the key which sets it off. As I walked along, people seemed to pop out of nowhere from behind cars, and I seemed to have a sixth sense which let me know when cars were about to back out, even though I was looking down at my phone. Everyone was in a sort of functional daze. Somehow, I figured out where my car was.

It’s kind of amusing that mere clothing and consumer electronics could result in such a mass of normies gathering in one place. I struggle to see a whole lot of value in any of these things. I suppose I have Spartan tastes. I don’t understand the allure of the most-sought-after Black Friday item — big screen TVs. Whether I watch something on a cell phone, laptop screen, or giant TV it makes no difference to me. I’m really more interested in the concept being expressed rather than the sensory experience of it. I’ve always been that way. I never saw the point of actually going to sports games back when I followed pro sports because I could pretty much see the same thing happening on television.

To me if one likes a piece of clothing, he buys it for the quality — not because it has a logo on it or is on sale. I can’t see the point of joining in on mass sales events like this. I believe one should dress well, and I suppose it’s nice to woo normie guests with big TV screens, but the hullabaloo over Black Friday seems as foreign to me as the non-white immigrants who disproportionately fuel it.