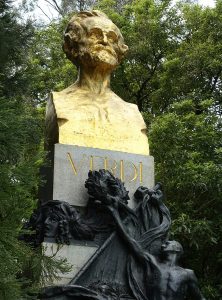 George Martin is an independent historian who has written a number of books about the history of opera (including a great biography of Verdi). His account of how opera and in particular Verdi’s operas rose to prominence in San Francisco during the Gold Rush years describes a fascinating but not widely known episode in the history of the American West.

In the 1850s the majority of San Franciscans were men under the age of 40 who had immigrated to California amid the Gold Rush. Life in San Francisco was characterized by violence and chaos: brawls, duels, gambling, homicide, etc. One might not predict that opera would flourish in such a climate, but over the course of a decade it became one of the city’s more popular forms of entertainment. Opera in San Francisco reached its peak in 1860 with 145 operatic performances that year, a striking figure considering the population of the city. Were the Metropolitan Opera to sell a proportional number of tickets to New Yorkers in the present day, “the Metropolitan would need to build twenty additional houses of the same size and run all twenty-one every night of the year” (p. 199).

The grandiosity and drama of opera reflected life in San Francisco at the time. Daily life lacked the stability of life in the East; there were no clear social classes and it was common to lose or gain a fortune overnight. Thus Verdi’s operas, with their dramatic musical and emotional contrasts and reversals of fortune, in particular resonated with San Franciscans.

San Francisco during this time attracted immigrants of many backgrounds, but they were nearly all white (apart from a Chinese minority): Spanish, Italian, French, German, English, Irish, etc. Each group contributed in some form to the musical life of San Francisco. The Italians naturally were responsible for introducing Italian opera to the city, the French founded the city’s first residential opera company and the first music school, Germans comprised the majority of the chorus and orchestra, and so on. [2]The arrival of a troupe of three Italian opera singers in 1851 marked the first performances of complete operas in San Francisco (prior to this, only fragments of works had been performed). One month following their arrival, they staged Bellini’s Somnambula. It was a great success and a positive review was published in a local newspaper, the Alta California. This was followed by Bellini’s Norma and then Verdi’s Ernani. The three singers left after the great fire of 1851, but this heralded the beginning of opera’s popularity in San Francisco.

As the city began to recover from the fire, a new group of singers lead by English musician and composer George Loder formed. A number of high-profile singers arrived soon after, including Anna Bishop and Catherine Hayes. By 1854, following the arrival of a second Italian opera troupe, the operatic life of the city had been revived. In their first season, the troupe performed two Verdi operas (Ernani and Nabucco), two by Donizetti, and one by Bellini.

Ernani became the most popular opera among San Franciscans in the early-to-mid 1850s. It’s not hard to see why, since the opera deals with themes of vengeance, political intrigue, and honor. In short Ernani, a hot-headed bandit of noble birth in love with a woman betrothed to another man, upon finally being granted by the king the chance to marry her must ultimately keep a prior oath and commit suicide.

Theatres were often the sites of brawls and fist fights, which usually led to duels. The author notes that “as late as 1859 ushers still sometimes used ‘slungshots’ — a mass of metal or stone fitted onto a handle and used as a weapon — to control the unruly” (p. 91). On one occasion, one man stretched his feet onto another’s seat in a theatre, and the two men consequently resolved to duel each other, resulting in the death of the man who had instigated the quarrel.

On another occasion, the presence of a professional gambler, Charles Cora, in the orchestra seating with his escort, a well-known prostitute, created a stir among the audience. One man, a certain Gen. William H. Richardson, insisted that Cora and the woman leave or sit in a more private section of the theatre. A few days later, Cora shot Richardson in broad daylight. Amid Cora’s prolonged trial, the editor of a local newspaper, James King, authored editorials blaming the jury’s indecision on political corruption. In an attempt to expose the city supervisor, James P. Casey, as a corrupt Tammany bureaucrat, King publicly released his New York prison records. Casey shot him that afternoon. In response, citizens organized amongst themselves and revived the Vigilance Committee that had previously been formed in 1851. They eventually usurped power from local politicians, likewise through violence. The Committee held trials for Cora and Casey and then promptly executed them.

In the mid-1850s the city sank into financial depression, and opera suffered to an extent as a result. The theatres’ prospects did not improve until a couple of years later, largely due to the efforts of impresario Thomas Maguire and the arrival of an Italian tenor, Eugenio Bianchi, and his wife Giovanna, a soprano. They began with a series of concerts presenting isolated arias and duets. These concerts were very popular and Maguire’s 1,700-seat theatre was full each time.

The opera in its masculine tone, its violence, its nostalgia, its inherent melancholy, and its exalted portrayal of the hero and heroine all fit San Francisco as it was in 1859, and as its people continued to think of themselves for the next forty years . . . It was by far the most frequently performed of all operas, not only of Verdi but of any composer, of any nationality. It suited the city, and San Franciscans took it for their own. (p. 139)

The production of La traviata followed. La traviata, with its more introspective and subdued tone, did not receive the same enthusiasm as Ernani or Il trovatore, though it later years it became more popular as San Francisco became a more settled city, and the tastes of its inhabitants shifted. But for several decades Verdi’s works remained the most frequently performed operas in San Francisco. In 1914 a statue of him was erected in Golden Gate Park, and tens of thousands were present at its dedication, at which Luisa Tetrazzini sang an aria from Aida.[1]

It’s worth noting that during the Gold Rush years, opera was not thought of as an art form intended for the elite. Audience members included scruffy miners and cultivated Europeans alike. The more refined set looked down upon the rowdy behavior of the former, who were prone to spitting, jeering, and smoking during performances, but otherwise there was not a sharp divide between the two. Back then “everyone went to every sort of entertainment — opera, drama, minstrel shows, mime, ballet and circuses — and within the audience there were no sharp divisions of taste reflecting differences in class or culture. There was consequently no division between popular and serious music” (p. 162).

San Francisco is a peculiar case on account of the unique circumstances of the city’s founding and its isolation from other American cities. But the gulf between “high culture” and popular culture throughout America in general was not what it is now. Similarly in nineteenth-century Italy, Verdi’s operas enjoyed the same popularity that pop music does today. There was a distinctly populist and nationalistic tone to many of Verdi’s works (Nabucco, Attila, I Lombardi, etc.) that inspired patriotic fervor among Italians during the struggle for Italian unification, and Verdi became a hero of the people and a symbol of the Risorgimento.

The marked divide between “high culture” and mass entertainment in modern America is perhaps a consequence of the fragmentation inherent in our society. Modern America is characterized above all by cultural and racial division. There will always be some degree of difference between high culture and popular culture, but in homogenous societies, there is a common thread that permeates and unifies all forms of culture; in multiracial societies, mass entertainment must be stripped of this element (which is necessarily specific to a single group) in order to appeal to a much broader audience composed of radically different individuals. As a result mass entertainment has become culturally empty and sterile, an effect amplified by Jewish “culture distortion.” In homogenous societies, high culture and more popular forms of entertainment exist along the same continuum and within the same broader realm of culture, whereas in diverse societies, all culture that exists outside of mass entertainment is confined to its own respective cultural ghetto (as classical music arguably is today), cut off from the source from which it sprang and from society at large.

As well as being a work of operatic history, Martin’s book gives a sense of what San Francisco was like at the time. The character of the city united the rough, muscular vigor of the frontier with the civilizing elements of European high culture. In reading about the colorful and passionate history of this city, modern life seems dull and morose in comparison. San Francisco in many ways embodied the almost mythic promise of America as a nation in its infancy. One cannot help but wonder if such represents something that this nation could have been.

1. “Verdi gift unveiled amid burst of song,” San Francisco Examiner, March 23, 1914, 3. A quatrain by Gabriele D’Annunzio is inscribed upon the back of the statue’s base.