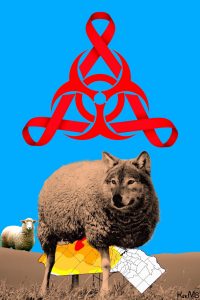 The term “poz” originated as a slang term for “positive,” as in “HIV positive.” There’s a POZ [2] magazine, POZ Personals [3], and a PozMatch [4] dating site. A California DMV allowed a man in Santa Clara to use “HIV POZ” as his license plate. [5]

An article at the “Black Youth Project” has its author tell us how [6] “The fact that [he is] HIV positive is a result of anti-Black state sanctioned violence.” He goes on to tell us how he “could never bring [himself] to have penetrative sex” with his white boyfriend—and how he is grateful now “to know that [he] was actually protecting [himself] the entire time. Not allowing his white (everything) to occupy any more space within [him].” Somehow, he concludes with this: “I am convinced that ‘safe sex’ is now and has always been for the white boy, who gets to decide whether he wants sex to be ‘safe’ or not, because something is always around to protect him.”

In the context of the Alt Right, “poz” thus became a derogatory term for degenerate aspects of modern society whose worst component is their inability to simply acknowledge that obviously bad things are bad—which in other words confusedly seem to think that pretending that bad things are somehow good is the way to make the world better. Contextually, someone who contracts HIV after one unlucky sexual encounter and then readily acknowledges that something horrible has happened, so that he now has to learn to make responsible choices, is not “pozzed” in the Alt-Right sense—whatever else he may be. The “pozzed” individual is the one whose response to contracting HIV is demonstrated by the lack of any serious mature self-reflection found in article titles like “Learning to love myself enough to f*ck raw while Black and HIV positive [6].”

Like that article, this one is about “the poz” in both of these senses of the word.

If you haven’t been made aware yet, a new bill in California (SB239) [7] is reducing criminal penalties for willful transmission of HIV/AIDS, including in blood donation.

To be clear, people with HIV aren’t being allowed to donate blood (see Section 3, 1644.5 of the bill). However, the felony penalties for attempting to do so while knowingly carrying HIV have been removed.

Supporters of the move argue that this is justified because it was never a felony to attempt to donate blood while being infected by any of the other viruses that can prohibit a person from being allowed to donate their blood—such as West Nile virus, for example.

However, that comparison is absurd. And to explain why, I’m going to have to offer a few gruesome details about how difficult it actually is to catch HIV. Most people simply have no idea how these risks work—and the portrayal of all “poz-persons” as a baselessly stigmatized class of victims obscures some fairly important parts of the truth: HIV is not a disease that “targets” gay people, or blacks, or anyone else. It is a disease that “targets” only the most extreme forms of blatantly degenerate behavior. One way to put it is to say that at the vast majority of the time, HIV is a virus that judges by the content of its host’s character, and not by the color of his skin or the simple fact of his sexual orientation. If you understand what catching the disease actually entails, then it becomes little surprise that those who do so would think that the next natural step is to write articles online about “Learning to love [themselves] enough to f*ck raw” while carrying the disease and exposing others to it.

That’s because HIV is transmitted primarily through contact with blood. So usually, the only time transmission of HIV through oral sex is a risk is if the participant has mouth or gum problems causing open bleeding inside their mouth at the time [8].

Do people catch HIV “innocently”—while behaving normally with little reason to expect themselves to be at risk? Sure, it happens. Statistically, even the most improbable events are probably going to happen periodically, given enough time. But the disease is so difficult to catch that “unlucky” people are always going to be a minority. To put it crudely, you really have to be letting a whole hell of a lot of diseased people rip up your anal cavity without a condom to the point that you’re openly bleeding and washing a dick with your blood before your chance of catching HIV can ever get particularly high.

In late 2016, a man posted a fake account for his ex-partner on the gay app Grindr [10] for the purposes of drawing unwanted attention towards him as petty revenge when their relationship ended. The profile highlighted the fact that he was there to pursue secret rape fantasies, and made a clear point to emphasize that he was HIV positive. Even though his profile stated his HIV-positive status up front very clearly (the ex-partner had mentioned it for malicious purposes in an attempt to slander him), the headlines tell us that over 1,000 men still showed up at his door wanting to play out rape fantasies. [11] HIV is, again, such a difficult disease to catch that people engaging in extreme levels of degenerate behavior like this are going to be extremely disproportionately represented in the kinds of people who finally catch it.

With this picture in place, now, let me ask you: do you think someone who catches HIV is exactly as likely as someone who caught West Nile virus by getting accidentally bit by a single unlucky mosquito just once to try to donate blood in order to help people in good faith? Do you think the kind of person who shows up at the door of a random stranger who has just advertised their HIV-positive status to play out rape fantasies is no less likely to try to infect others maliciously than someone who just gotten once by a single infected mosquito by accident?

A 1978 study by Alan P. Bell and Martin S. Weinberg, “Homosexualities: A Study of Diversity Among Men and Women,” found that 28% of gay male respondents estimated that they had had 1,000 or more sexual partners in their lifetime. 43% estimated that they had had 500 or more partners. And 79% of these respondents reported that over half of their sexual partners were strangers whom they had had sex with only once. This is the real reason why “gay men have been disproportionately affected” and are “44 to 86 times more likely to be infected with HIV than their heterosexual counterparts,” [12] as this paper from the U.S. Department of Health and Human Services tells us, removing all agency from gay men themselves with the verbs conjugated in the past participle as has long been standard for reports of this kind.

To the extent that “homophobia” is present in the Alt Right, it is not because we believe gays are willfully choosing to follow a perversion from God’s plan for sexuality, or because we simply fear those who are different from us, or any other such ridiculous excuse of an explanation. It’s because we’ve broken through society’s poz far enough to be aware of the realities of these kinds of behaviors.

When a place like California implements greater criminal penalties for calling transgender people by the wrong pronoun [13] than for knowingly attempting to spread HIV, we know we have a serious problem.

“The Poz” has become an even greater threat to a sane and decent human society than the actual poz.