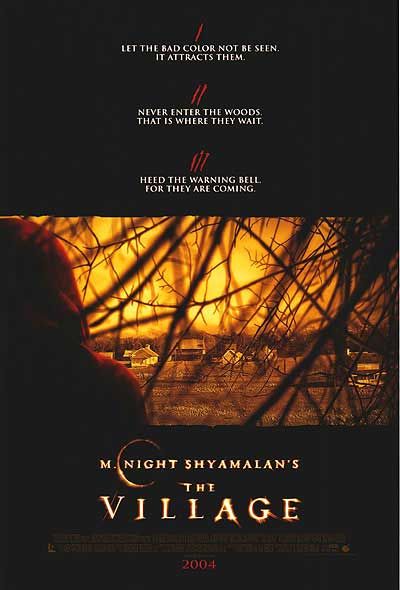 Audiences and critics left theaters showing M. Night Shyamalan’s film The Village (2004) disappointed, polarized, or uncertain of this flawed masterpiece. They had every right to be unsettled, since The Village is a suspense film whose story is too unbelievable to really achieve the level of a masterpiece despite excellent cinematography, excellent acting, excellent directing, and really excellent music.[1] [2] Despite its many flaws, The Village has several high concept ideas that should be explored. Unfortunately, the ideas can’t be fully discussed without revealing the famous Shyamalan plot twist.

Unfortunately, Noah has figured out the secret of the village. While Ivy is on her way to the towns, she is attacked by Noah in a monster costume but she outsmarts and kills him. As Ivy carries out her mission the audience discovers that the year is actually 2004. Ivy returns to the village with the medicine, she saves Lucius and the Elders vote to continue with their way of life.

The Village (2004) is a bit like another beautifully done movie with a similar unbelievable plot – Vertigo (1958). Like Vertigo, The Village is an entirely white affair. This demographic situation gives the film a glimpse of the beauty of life before integration, multiculturalism, and non-white immigration. Watching the whitopian paradise shown in both films lowers the blood pressure despite the suspense.

The High Concepts within The Village (2004)

High concept 1: There is no way to get around the Christian interpretation of the film. Sin and sorrow follow people wherever they go. Pre-industrial villages are not free from trouble. Additionally, there is no one innocent enough to be free from sinful behavior. The simpleton Noah is not innocent, he is perverse, twisted, cruel, and jealous enough to stab someone.

High Concept 2: The Village is an indictment of White Flight. The Elders are practicing a form of Plato’s noble lie. However, their noble lie is counterproductive. In carrying out this lie, they keep themselves free from much of the crime of “the towns,” but bring upon themselves other forms of grief. The village doesn’t have a noble lie, it has an evil lie.

However, there is more to it than that. As mentioned above, the Elders left “the towns” and set up the village because of crime in the 1970s. In American English, words like “inner city,” the “urban league,” and “the towns” are euphemisms describing black neighborhoods with black crime. With the exception of Edward Walker’s back-story, all the Elders had a family member horribly killed by African-style crime. For example, Mrs. Clack’s (Cherry Jones) older sister was gang raped, murdered and stuffed in a dumpster.[2] [3] The Elders’ lie is every bit as harmful to the lie of equality and “civil rights” in modern America. The Elders are like the Baby Boomers who retreated to the suburbs in search of “good schools” while praising Martin Luther King Jr.

Each generation’s characteristics are determined by the times in which they were children. Those who grow up during a time of peace and prosperity – such as the Baby Boomer’s idyllic 1950s childhood become Prophets. As the Prophets become young adults they carry out a Spiritual Awakening that influences them and society for the rest of their lives. The Prophets are followed by Nomads who saw the bad parts of the Spiritual Awakening growing up. These Nomads have short childhoods, don’t expect much help, and know how the world works. They are often considered “bad.” The Nomads are followed by Heroes, who deal as young adults with a Secular Crisis which changes society and resets the generational turns. Artists are children through the Secular Crisis and keep out of the way. Their perspective on the Secular Crisis makes them compromisers throughout their lives.

A Secular Crisis arrives when the elders of society are of the Prophet generation. Their uncompromising ways might really be the thing that brings about the crisis. The Prophets issue a clear moral call, the Nomads give the tough, realistic orders about how to proceed, and the Hero Generation carries out the mission to save the community.

Below is a chart which shows how the four generational archetypes of The Strauss–Howe Generational Theory aligns with the characters in The Village (2004): According to the The Strauss–Howe Generational Theory, Americans in 2017 are living in the time of a Secular Crisis. Under their theory, Strauss and Howe postulate that all races in America are supposed to come together to meet the crisis during this time. However, it is clear that whites are (sort of) coalescing into a block and blacks are certainly coalescing. However both races are increasingly antagonistic towards each other. How this situation will end up is anyone’s guess, but in the last Crisis Phase 1929 – 1946, tensions between the Americans and Japanese were known to be rising well before Pearl Harbor. It could be that the culmination of this crisis will include a racial reckoning.

Artists (not the archetype) but the people that are actually artistic tend to produce works that fit in with the spirit of the times and reflect the soul of society. It could be that M. Night Shyamalan might be saying something more about a whitopian village away from “the towns” than just what is seen in this flawed man v. supernatural story.

[1] [8] Personally, I thought this particular part of the soundtrack was the best: https://www.youtube.com/watch?v=LUK0HET26hI [9]