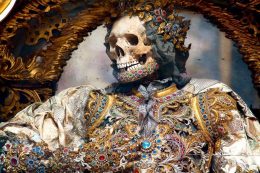 With this in mind, I pointed out that the only reason HIV “disproportionately affects ” homosexuals is because extreme sexual promiscuity is absolutely rampant across the homosexual population as a whole. I cited a 1978 study on this point that found that 43% of gay male respondents estimated more than 500 lifetime sexual partners, with 28% estimating more than 1,000.

To the extent that HIV has become less socially destructive or likely to end in death, it is because of the vast amounts of time resources we’ve expended as a society to research how to save sexual degenerates from their own self-destruction. The lifelong cost of administering PrEP (pre-exposure prophylaxis) to a single HIV-infected individual to allow them to continue having high-risk sexual activity despite their infection is $400,000 [4]—and this cost ends up eaten by society as a whole through insurance and other forms of subsidy.

Furthermore, one “man who has sex with men (MSM)” has already managed to transmit HIV despite adhering well to a daily PrEP regimen [5] by having somewhere between an estimated 175 and 675 anal sex partners in a mere 9-month time span. And unlike its (plenty degenerate enough) heterosexual counterpart Tinder, the gay app Grindr actually has to have checkboxes to allow users to mark their HIV status and whether or not they’re taking PrEP. [6] While heterosexuals on degenerate hookup apps like these are marking whether or not they smoke cigarettes or diet when they create their profiles, homosexuals actually have to sit there clicking checkboxes about HIV/AIDS.

However, I can’t help but wonder how much of all of this is because homosexual men truly differ from heterosexual men, and how much is because homosexual men are simply freed from the sane limits that are placed on male sexual desire in heterosexual pairings by womens’ choosiness. I probably can’t even remember the number of times I’ve heard heterosexual men express in passing that they wish they could be gay because of the sex life they believe this would allow them. Take this stand-up comedy bit from black American actor Donald Glover [7], for just one example.

Personally, sexual degeneracy is a topic that I care about a lot—and it’s one of the key points that attracts me to the New Right as a whole. There’s been a lot of discussion about what our policy should be towards homosexuals. But we need to keep this in perspective. Heterosexual degeneracy matters a lot more to me than homosexual degeneracy ever will.

Were I to have a daughter, it would be the degenerate heterosexual who bears the greatest risk, by far, of trying to infect her with an STD of some kind. Degenerate social norms aimed towards heterosexuals from the media and society in general would bear the greatest risk of subverting her progression into healthy adulthood and teaching her to waste away her most valuable years riding what Chateau Heartiste calls “the cock carousel” only to later try to salvage her socio-sexual market value and find a relationship appropriate to her worth when it’s far too late. A heterosexual degenerate like Harvey Weinstein would bear the greatest risk of sexually abusing or manipulating her.

Meanwhile, these degenerate norms promoted towards and increasingly established among heterosexuals are what will destroy the pool of worthy, dateable, marriageable women for my son to engage with and eventually choose between over the course of the next twenty or more years.

That matters to me a lot.

So, what should our policy be? Let’s leave aside any question of the morality of homosexuality and just focus on tactics and strategy for a moment.

Meanwhile, Jonathan Haidt’s research [11] finds that conservatives score much higher on valuing what Haidt calls “loyalty” than liberals do. My experience is that the New Right basically takes all the ways conservatives differ from liberals on Haidt’s scales and exaggerates them: even farther below liberals than conservatives are on “caring,” even higher above liberals than conservatives are on “purity,” and so on and so forth. I personally score a solid five out of five for loyalty on Haidt’s scale—and it’s the only value I land a perfect score on. At a basic level, when a liberal evaluates the morality of a situation, his mind asks: “Was anyone hurt?” And it essentially asks that question only, boiling everything down to that one singular metric. But mine asks: “Was loyalty demonstrated between parties who owed it to each other?” in a very similarly emphasized way.

So it wouldn’t be a surprise if the kinds of high-loyalty individuals we want to attract were to side with their own families before they would side with us, were we to force them to choose, when they discover that relatives they care about might be homosexual. Just to be clear, I myself am a married heterosexual with a child, who has no homosexual relatives. But whatever else you may think about homosexuality, building our movement on blanket stigmatization of a phenomenon that is inevitably going to crop up in our very own families—through no one’s fault or decision at all—probably just isn’t good strategy for growing our ranks and optimizing our ability to reach a wider society with our core message. And we need to win the advancement of our core message far more than we need to remove every single person who might have a homosexual orientation from our ranks.

Again, we have to keep in mind how important human biodiversity is to the ideology and worldview of the New Right as a whole. The very same twin studies and adoption studies whose methodology we use to prove the existence of average IQ differences in different ethnic population groups also show us that homosexuality has a very high degree of heritability [12]. This isn’t said to excuse homosexuality “because it’s natural,” but because if your argument is that homosexuals ought to learn to suck it up and reproduce in heterosexual marriages, then you are actually ironically only promoting the long-term spread of homosexuality throughout the human population. And how long will your stay-in-the-closet ethic stay in place when homosexuals grow from ~4% to increasingly larger proportions of the human population?

That actually does sound like a biologically-guaranteed way to turn the world into a giant bathhouse over enough time. Also, congratulations: you’ll be happy to know you’re repeating an argument that Milo Yiannopoulos made at Breitbart back in 2015 [13].

To my mind, the deepest problems that come along with homosexuality aren’t simply the existence of homosexual orientation as such, and to simplify the issue in this way is actually to trivialize just how deep the real spiritual and relational problems currently present in Western society actually go.

The obvious problems are that flagrant extremes of sexual degeneracy are dramatically more normalized among homosexuals than they are among the heterosexual majority of the population, that political correctness prevents us from acknowledging distinctions like these and dealing with reality as it is, and that homosexuals themselves tend to cluster in identity group voting blocs to support such politically correct censorship and force the rest of society to deal with issues like AIDS with blinders on.