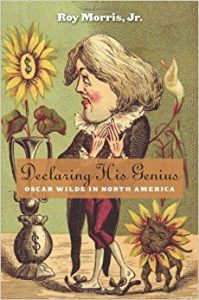 Oscar Wilde arrived in America in January 1882 as a young man of 27. Over the course of the next eleven months he would travel 15,000 miles across the country, delivering a total of 140 lectures primarily on the English Renaissance, the Pre-Raphaelites, and the decorative arts. He encountered a motley cast of characters throughout his travels, ranging from politicians, reporters, and prominent literary figures to miners and cowboys out West. It was in the West that he found the audience most receptive to his ideas.

His lecture tour recalls the lyceum movement that flourished in the early nineteenth century, which entailed the establishment of hundreds of organizations across the country that sponsored public educational programs and provided venues for traveling lecturers and entertainers. Morris’s book chronicles each leg of Wilde’s tour in detail. The usual sequence of events that unfolded in each city upon his arrival lends itself to repetition, but the subject matter is interesting enough that the book remains engaging. It also benefits from the inclusion of a handful of Wilde’s characteristic witticisms (e.g., upon visiting Cincinnati he remarked: “I wonder no criminal has ever pleaded the ugliness of your city as an excuse for his crimes!”).

By 1882 Wilde had not yet distinguished himself as a playwright and poet (he had written only one play, almost never performed today, and a short poetry collection) but was already a figurehead of the Aesthetic Movement on account of his colorful personality and skill in self-promotion. He set off for America at the request of the English impresario Richard D’Oyly Carte, who had produced Gilbert and Sullivan’s Patience and wanted to promote the play in America by showcasing Wilde as a real-life Bunthorne who would familiarize Americans with aestheticism, which the play was meant to satirize. Wilde embraced the role and used it to his advantage. His flamboyant persona attracted the attention of Americans of all stripes, and his lectures regularly drew large crowds.

Wilde grew to be a polarizing figure who was both admired and reviled. As his fame increased he was invited to many social events, where his witty repartees made him a popular guest. Conversely he was often ridiculed in the press: the Chicago Tribune deemed him “a twittering sparrow come to fill his maw with insects” and the Washington Post printed a drawing of him beside a primitive-looking character, “Mr. Wild of Borneo,” suggesting that he represented a decline in human evolution (also inviting comparison to the “Wild Men of Borneo,” a pair of mentally retarded midgets who featured in P. T. Barnum’s freak shows). In Boston he was mocked by Harvard students and criticized by Henry James, who called him a “fatuous fool.” Wilde thrived on the controversy.

Overall he was greeted with the greatest enthusiasm not in the universities or salons of the Eastern cities, but in the West. Wilde likewise preferred the West to the East:

I am especially delighted with the West, it is so new and fresh, and the people are so generous and free from prejudice. In the older cities in the East, the people are enveloped in a perfect mist of prejudice, quite unlimited; they have imported so many Old World ideas, absurdities, and affectations, that they have lost all sincerity and naturalness.

The “prejudice” he mentions likely refers to ideas about class and social conventions. His criticism of such prejudices did not prevent him from disparaging Chinese art and tapping into anti-Chinese sentiment in San Francisco (though Chinatown intrigued him): “Don’t borrow any Chinese art, for you have no need of it any more than you have need of Chinese labor.” Wilde was popular in San Francisco and described it as his favorite American city.

Interestingly he also sympathized with Southerners, comparing their attempt to secede from the Union to Ireland’s struggle for independence. On his tour he encountered the Confederate general P. G. T. Beauregard, who showed him the sites of New Orleans, and Jefferson Davis himself, whom Wilde called “a man of the keenest intellect.”

But most interesting is Wilde’s encounter with silver miners in Leadville, Colorado. Leadville was notable for being one of the world’s largest silver camps as well as for being the hometown of John Baker “Texas Jack” Omohundro, a famous cowboy and friend of Buffalo Bill, and the outlaw Doc Holliday, who took part in the gunfight at the O.K. Corral. The town was the site of regular gunfights and Wilde brushed up on his shooting skills before arriving.

His first appearance in Leadville was at an opera house, where he lectured on Renaissance art to a fascinated audience. The author relates an anecdote: “After Wilde invoked the name of Renaissance goldsmith Benvenuto Cellini, the miners wanted to know why Wilde hadn’t brought him along. When Wilde said that, regrettably, Cellini was dead, they wanted to know who had shot him.” Wilde was then taken to the depths of a silver mine, where he drank whiskey with the miners, who pronounced him “a bully boy with no glass eye” and gave him tips on silver mining.

Wilde’s persona as an effete dandy seems incompatible with the image of manly frontiersmen, but it is perhaps not surprising that his ideas resonated with the miners. When Wilde landed in America, he told the customs official he had “nothing to declare but his genius.”

In spite of his foppish appearance, Wilde was described as a man of a vigorous, hearty temperament who possessed a firm handshake and readily engaged in fistfights when challenged. Physically he was described as being six foot three, though thin, with broad shoulders and strong arms. He was an avid drinker and could outdrink most. (He also held realistic views regarding differences between the sexes that would be considered politically incorrect today.)

Moreover Wilde’s worldview was fundamentally anti-bourgeois. His devotion to beauty transcended economic and moral concerns. This led him to criticize the modern, capitalist conception of work, which he believed was inherently antithetical to the creative process. He believed that “a man’s work should be a joy to him” and that one should subordinate himself not to “work” but to higher ideals.

Wilde stated that the intent of his lecture tour in America was “to make art not a luxury for the rich but, as it should be, the most splendid of all the chords through which the spirit of any nation manifests its power.” His idea of a political utopia entailed liberating the working class from their slavery to machinery, which would grant them the opportunity to create art and reach their fullest potential. This was an era in which workers in both America and Britain endured terrible conditions, working long hours and receiving little pay. Thus Wilde was an egalitarian, though his beliefs bore scant resemblance to the leveling force of modern progressivism, as he believed that ultimately one should aspire to attain higher levels of being (the idea that absolute ideals, such as beauty, exist and that one should strive toward them runs counter to egalitarian relativism). The political system he envisioned was one that would enable each individual to pursue self-actualization, thereby ennobling the soul.

Wilde believed that this could be accomplished through future advances in technology:

Under proper conditions machinery will serve man . . . The fact is, that civilisation requires slaves. The Greeks were quite right there. Unless there are slaves to do the ugly, horrible, uninteresting work, culture and contemplation become almost impossible. Human slavery is wrong, insecure, and demoralising. On mechanical slavery, on the slavery of the machine, the future of the world depends.[1]

The author notes that Wilde “sounds a little like Marx” in his essay on socialism (“The Soul of Man under Socialism”), but it would be more accurate to compare Wilde’s idea of socialism to the philosophy of Social Credit (apart from their very different approaches to private property) in that the Social Credit movement advocated the advancement of technology toward a similar end and proposed the idea of a “National Dividend” that would lend people the freedom to pursue artistic, intellectual, and spiritual endeavors.

Wilde’s views can be compared to those of William Morris, an English poet, painter, and textile designer associated with the Pre-Raphaelites (who in turn heavily influenced the Aesthetic Movement). Inspired by the workers’ guilds of the Middle Ages, Morris sought to restore dignity to work by promoting hand-craftsmanship and raising it to the level of art. Thus he came to reject the joint forces of modernity and capitalism.

The rugged individualism of the Wild West represented a similar rejection of bourgeois values. In the West, men were masters of their own fate. The notion of economic security was subordinated to the ideals of courage, adventurousness, and honor. Therefore the spirit of the frontier shared the same fundamental instinct as Wilde’s aestheticism. This also occurred to Wilde when he saw a sign in Leadville that read “Don’t shoot the pianist; he is doing his best” and was struck by the fact that in the Wild West, poor piano playing could be grounds for being shot. He declared that this was, in his words, “the only rational method of art criticism I have ever come across.”

Morris’s account of Wilde’s lecture tour in America also recalls an era in which artists and intellectuals engaged with the public on a much broader scale and assumed a level of public responsibility that one rarely finds among artists and intellectuals today. The tradition of the public intellectual remained a staple of American cultural life until it began to fizzle out by the latter half of the twentieth century. There are a number of reasons for this, from the increasing hyperspecialization of academia to the rapid growth of the Internet. But it can also be traced back to the contempt that most modern American intellectuals have for the majority of Americans. There is no bond that exists between them and the people because they entirely lack empathy for the common man. By contrast, Wilde was a populist: he hoped that “the masses [would] come to be the creators in art.” Modern leftists claim Wilde as one of their own but it is clear that were he alive today, his staunch populism and simultaneous aesthetic elitism (and his wit) would set him apart from the rest and perhaps would even render him a fellow traveler of the Right.