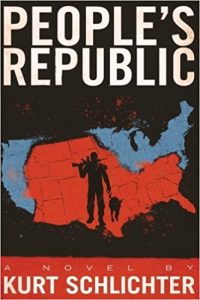 I’m reviewing this book not because I think it’s an important one for the Dissident Right, but because knowing about it will be instructive. Kurt Schlichter’s People’s Republic is, in essence, a cowardly novel masquerading as a brave one. Yet, compared to the state of popular literature in the West, it’s still pretty brave. It is a dystopian near-future thriller about something I’m sure many of us think about constantly: the breakup of the United States roughly according to red state-blue state lines. The premise offers no surprises considering the genre: an all-seeing, military-trained, hyper-masculine tough guy is hired to go into enemy territory to rescue (or perhaps kidnap) the beautiful yet misguided daughter of a powerful leader.

Stories like that sort of write themselves, don’t they?

People’s Republic comes off as a glorified screenplay with lots of military and firearms information for readers to chew on between plot points. Knowing Schlichter (a former US Army infantry officer and a conservative radio commentator and writer for TownHall.com, IJ Review, The Federalist, and other Right-of-center media outlets), it should surprise no one that this is a novel of unabashed Right-wing supremacy. Morally, economically, and militarily, Right constantly trumps Left in People’s Republic. Since the story almost entirely takes place in the Leftist-controlled, nigh-communist blue states (now known, of course, as “the People’s Republic”), Schlichter also exercises his need to put the dysfunction of the Left on full display. And there’s nothing subtle about it.

As our perfect protagonist Kelly Turnbull infiltrates the People’s Republic by way of Nevada, he encounters people who are either cynical and bitter about their impoverishment or opportunistic and predatory as they curry favor with their corrupt and dishonest leaders. The blue states have degenerated into a dusty husk of their former capitalist glory. After the “Split” as Schlichter and his characters constantly refer to the breakup of America (which happened without a full-blown war, by the way), the major corporations soon realized that the Soviet-styled “blues” had no future for their business and quickly bailed, leaving behind their buildings and signs to slowly fall into disrepair. Most police officers left as well, leaving behind thugs and oafs to be taken on as security personnel. Chain restaurants like Denny’s have become generic eating establishments where patrons present ration cards and are served substandard food according to their state-allotted privilege rankings. People wait in line for the right to work in the big cities, the only functioning places in the entire Republic which, not coincidentally, is where all the high-privileged citizens live. The entire populace seems constantly on the verge of rioting and are held in check only by the brutal state security forces, of which the villain, one Martin Rios-Parkinson, is the director. He, of course, is the one who is sleeping with (or holding captive) the prize female Turnbull needs to kidnap (or rescue). The only improvement in all of this is the great reduction in West Coast road traffic since most Republic citizens are too poor to own automobiles.

Schlichter accompanies Turnbull with a young sidekick named Junior who knows very little about the People’s Republic before the Split. This gives Schlichter the excuse to put paragraphs of exposition in the mouth of Turnbull as Junior keeps asking naïve yet reasonable questions. And the moral of all this exposition never changes: Right good, Left bad.

Before discussing the book’s appalling catalog of flaws, let’s cover what it does well. For its genre, the prose is perfectly appropriate as a vehicle to take the reader from plot point A to plot point B. There’s nothing fancy about it, but nothing pretentious either. As advertised, the plot is fast paced and action packed. Schlichter makes the effort to ensure that most of his action is believable, which puts People’s Republic a notch above any Jack Reacher novel. Further, Schlichter really knows his stuff when it comes to firearms, military strategy, and security ops. When he gets rolling on those topics, he’s fun to read. He also knows the terrain well (Nevada and California, mostly) and comes off as an expert guide who calls attention to striking details of landscapes and cityscapes which are inherently interesting. Further, his political signaling (more of the anti-Left than pro-Right variety) is unimpeachable, if almost entirely dogmatic. Still, anything that kicks the Left where it hurts should be appreciated by people on the Right, dissident or otherwise.

Most importantly, Schlichter does not give in to the temptation of inserting a token ‘person of color’ among the good guys to prove he’s not being racist. This is what marred the otherwise excellent Lucifer’s Hammer by Larry Niven and Jerry Pournelle: painting an inherently white character black for the sake of inclusion or diversity or some other dishonest leftist idiom. Schlichter’s good guys are white. His bad guys are white. And race never enters into the equation at all.

This strength is simultaneously the novel’s greatest weakness. How can anyone discuss the break-up of the United States without ever once mentioning the all-importance of race? Even cursory glances at the news these days will show how most non-whites and leftists take anti-white racism as their modus operandi and never shut up about it. In fact, such race hatred has become not just celebrated but mandatory on the Left. Further, the most interesting political developments in American politics have become the descent of the totalitarian Left into terroristic violence and the rise of the Dissident Right which explores taboo subjects such as race-realism, identitarianism, white nationalism, and counter-Semitism.

Schlichter pretends that none of this has happened , and instead evokes a world in which race really doesn’t matter. For him, blacks and Hispanics have no inherent racial qualities of their own and instead behave according to the classic libertarian (read: white) template. (Curiously, few Asians or Muslims reside in the California of the future.) As a result, his portrait of a divided America is not terribly convincing.

Another thing: the novel is gaggingly philo-Semitic. To be sure, I have no problem with sympathetic Jewish characters. Novels are supposed to recreate the world in all its mystery, so sure, good Jews, bad Jews, good gentiles, bad gentiles, literature should have room for it all—even boilerplate genre fiction like People’s Republic. The problem here, however, is that Schlichter takes time out of his plot to promote the tedious and oft-repeated lachrymose history of the Jews. While sneaking around Southern California with Junior, Turnbull encounters some red state moles in the form of a long-suffering Orthodox Jewish community which had been too enamored with the promise of a socialist utopia to escape the People’s Republic in time. In return for their cooperation with US spies and agents like Turnbull, they expect one day to be rescued by the United States and taken to their promised land. Sound familiar?

And, of course, most of these Jews are of the numinous variety as embodied by the saintlike Riah in Dickens’ Our Mutual Friend. That is, humble, brave, and big-hearted, even in the face of horrific oppression. Makes you want to kiss them on the cheek, doesn’t it? Of course, Schlichter neglects to mention that the people most hostile to the right-wing America he eulogizes in his novel are Jews as well. Also omitted is the inconvenient fact that of the people most likely to form the failed communist paradise he describes in People’s Republic, Jews, as a group, would be leading the cheers (and the funding).

By peddling such overused philo-Semitic tropes, People’s Republic becomes, in a sense, the opposite of the same coin occupied by Harold Covington’s The Hill of the Raven. Despite projecting similar dystopian futures, their attitudes towards Jews could not be more extreme and disparate, and this negatively impacts both books. For Covington, it seems, the only redemption for a Jew is to die. But for Schlichter, Jews must be lionized at all costs, even at the expense of the Truth.

People’s Republic does not even try to rise above its chosen genre. There is nothing unlikable about its heroes or likeable about its villains. All the good guys think correctly, and bad guys incorrectly. Amid the gaping Left-Right divide there are no original perspectives, no unique characters, and little that reasonably informed people haven’t already seen or heard on Fox News or read on Breitbart or various guns and ammo sites.

But what People’s Republic does do (quite unintentionally, I’m sure) is to pose the question of how Right-wing people like Kurt Schlichter really are. Do they, like many conservatives, represent the extreme rightward edge of the anti-white Left? That is, are they doing the enemy’s bidding by policing the Right for any sign of racial identity while themselves only offering toothless resistance to the Left? By not even acknowledging pro-white identity and by painting Jews as unjustly suffering victims, Schlichter does sort of paint the Dissident Right out of a pretty picture. Are we really beneath his notice? Does he really want us to go away? On the other hand, are people like Schlichter instead radical individualists who occupy the center of the Spectrum Axis, ready to lash out in all directions? Maybe they really are naïve enough to believe that all people can overcome their tribalism and live together in some conservatarian dreamland? The events in People’s Republic support this interpretation too.

Or, perhaps, the Kurt Schlichters of the world really are Right-wing; they’re just a little nervous about entering that Forbidden Zone all by themselves. The twin taboos of race realism and counter-Semitism stand in their way like hulking bullies. Who wants to take on such monsters when they can make a pretty good living slaying the smaller ones?

I really don’t have any answers here, but I can’t imagine the population of this third group is zero. I am sure there are quite a few people out there who appreciate stories like People’s Republic and who are only a nudge or two away from the Dissident Right. For this reason, I believe it should be top priority for the Dissident Right to be as persuasive and welcoming to such people as possible. After all, we all pretty much want the same things. We are not that far apart. I believe that many on the Dissident Right would be perfectly happy in the United States as depicted in Kurt Schlichter’s People’s Republic. Only thing is, we’d be the ones pointing out that the vast majority of the people living in it are white.