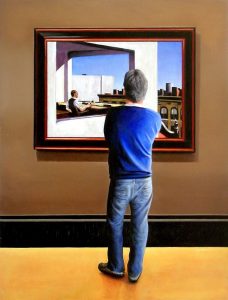 It had been quite a while since I last spent any meaningful amount of time in my hometown. When you read “hometown,” you probably imagine a very small, fairly poor, western town. It isn’t. I grew up in a mid-sized Midwestern city, a very multiracial place and reasonably affluent. Coming home was not about seeing closed factories or dying family farms. “The White Death” does not always have such universal icons marking its arrival.

My first night I met up with two good friends, Joseph and Henry, at one of our favorite hipster bars. We caught up and got drunk and it felt great. Joseph is doing very well. Always the techie of our group, he has been working at a very successful startup for a while now, and has loads of money. Henry, after spending years and years in academia finally decided it wasn’t worth it and wasn’t getting better, so opted out and is now a mailman. It is easy to make fun of him for that, but it was the right choice. His labor is more honest now, and his income and insurance more secure. I went home drunk and happy and fell asleep.

The next day Henry and I met up for lunch, along with an old film professor of Henry’s. It was nice at first, but I failed to noticed just how much wine Henry was drinking. By about four o’clock Henry was having a hard time finishing sentences. His old professor was a little amused, which surprised me. I proposed that we all go back to Henry’s and watch a movie. Henry had a hard time walking to my car a block away. When we arrived, he was so drunk he couldn’t figure out how his own TV and DVD player worked. Eventually he got it going and then fell asleep. The professor and I left. The next day Henry told me that he had actually slept through until that morning uninterrupted—about 17 hours of sleep in one go. I asked him if his live-in girlfriend was mad about it, and incredibly, he said she wasn’t. When I asked him what he wanted to do with the rest of his day, he said he was too hungover to do anything, and wanted to just stay inside his apartment all day and read by himself. Henry is 28.

That night I went out with Adam, my best friend from childhood. We went bowling with his wife and another couple. Adam just married her, after dating for years. She grew up across the street from him, and even when he and I were five he had a crush on her. He told me he was sorry for not inviting me to the wedding, but it was a small venue and I’d been gone for so long.

Two or three nights later I went to the same hipster watering hole with another old friend, King. King was always the baby of the group, several years younger than the rest of us. This was our first time together at a bar, and the first time we’d seen one another in almost three years. He generously bought the first round, but then sheepishly admitted that that was the last of his money because rent and bills had just cleared him out. I laughed and told him not to worry, that I’d cover us both for the rest of the night.

We drank local beer together for hours. King told me how he broke up with his girlfriend of seven years earlier this year, and that he’d been a very successful barslut ever since. Last year he was at a Christmas party and after drinking half a bottle of Black Velvet drove home. He got pulled over and spent three nights in county. His license was suspended and he had to pay a hefty fine. There was another fine to get his license back but he still hasn’t paid that one. He lamented that he was going to pay it with the large tax return poor people like him get every year, but that instead he spent the entire thing on cocaine. However, a few months ago he had to go to the ER because his chest pains got to be too much, so he has since stayed away from the stuff. Ergo, he is confident that he will be able to get his license back with next year’s tax return. King is 22.

We’re gettin’ no place fast as we can
Get a noseful from our so-called friends
We’re gettin’ nowhere quick as we know how
We whirl from town to town treatment bound
First thing we do when we finally pull up
Get shitface drunk try to sober up. — The Replacements, “Treatment Bound [3]”

The next night I got together with Mark at the same place. It had been about four years since I had last seen him. Back then he had decided to go back to college after dropping out so that he could stop paying back the large amount of debt he had taken on. That plan fell through as he dropped out again and now just has more debt. Now he is confident that he will not ever finish college, so is just trying to keep the interest rates at bay. I asked him if he was still seeing the girl he had been with for a year when I left. As it turns out, they broke up and Mark had tried to kill himself. He used an electrical cord to strangle himself, but lost consciousness before dying so his arms went limp before he could finish the job. Apparently his mom found him, but all he remembers is waking up in the ER. He spent a few days in a ward. The day he got out he tried to kill himself again. He used the same method, and failed the same way. And again, his mom found him and he woke up in the ER. After that he was put in the ward for “a long fucking time.” He told me he feels all better now. I asked him to call me the next time he planned on committing suicide. He laughed and said he would. Right now he has a pretty good gig working security at a popular concert venue. But he is trying to put together a plan to go to Colorado, buy as much high-quality pot as he can, and come back home to sell it so he can be done with his student loans. Mark is 25.

I feel an ocean of tears underneath my tongue
And the world is ending any minute now
But I can’t keep laughing ’cause I know it’s real — Soko, “Ocean of Tears [4]”

I have left home again and can’t stop thinking about my time there. Of course the sketches above are incomplete, but not every get-together made for a good story. I saw my old friends Beth and James as well, for instance. They are both doing . . . okay. My mother is also doing alright, I guess. My eldest sibling is doing very well. Happily married with kids and a house. Things are not all bad. I am so happy for Adam and this new chapter in his life, and Joseph is an eternal optimist, and with his skillset will always do well for himself.

Yet the angry ennui is there. Henry’s relationship with alcohol was never good, and it now seems worse than ever. At 28, it is getting harder and harder to imagine him turning this around without some kind of dire medical issue or tragic drunken antic waking him up. It bothers me that his girlfriend doesn’t mind. And I hate that Henry doesn’t seem to think he has better stuff to do than get plastered. The fact that he and I used to do that together when we were teenagers doesn’t matter to me. The time to grow-up came a long time ago.

I’m a person just like you
But I’ve got better things to do
Than sit around and fuck my head
Hang out with the living dead — Minor Threat, “Straight Edge [5]”

The anger in me for Henry’s state is nothing compared to the anger in me for King’s, though. Hospitalized for cocaine use at 22. Twenty-two. The number one cause of death in this country for people under 50 is overdose, remember [6]. And that is not the case in countries we consider inferior to us, like Canada or France. Nor is it the case in countries we consider morally reprobate, like Iran. I should admit that I have consumed cocaine, and more than once. But this isn’t high school—it isn’t even college. We are all adults now, we all work, we should all be planning for the future, whatever that is.

And what about Mark? Jesus fucking Christ. What the fuck am I supposed to do if he kills himself?

I hate living in this sad sad world where so many people I know are not living for tomorrow, or even for today—they are living for yesterday. I hate knowing that this will be the case for, at the very least, quite a while. I hate that because I had an extra 10 or 15 IQ points on everyone else I left for a coast, made some money, and moved away from the self-righteous hedonism of adolescent rage.

When we were all teenagers, we weren’t exactly wrong for doing what we did. The schools we went to were shit, our parents were losers, the global economy crashed, a lot of our older cousins had gotten fucked up fighting in our nation’s shitty wars. The adults we knew were liars for telling us tomorrow would be better as they lost their houses and got divorced. They lied to us when they said the schools we went to weren’t that bad, and they lied to a lot of us when they said college debt would be worth taking on. I wish when we were 16 that there had been something more meaningful and productive for us to be a part of, but there wasn’t. We all felt smart for knowing that the planet was a lie. And once you know it’s a lie, you’re just a sucker if you don’t get high.

But I don’t feel that way anymore. Like everyone else, I’m older now. With adulthood comes options. With agency comes opportunities. I’m better at making choices now than before. God might be dead, but my goals aren’t. So why do so many of the most important people from my adolescence and early twenties not feel the same? Or, alternatively, we did the distractions and escapes of our youth become their goals in adulthood? More selfishly: why haven’t I been able to build a better world, where they no longer feel this way?

I don’t know, I don’t have a clue. Sometimes I think that when the Revolution comes, I’ll be in a position to direct the state to execute the people who sold King all that coke. Maybe I’ll be able to piece together who it was that closed Henry’s avenues to happiness, and I’ll get to torture them on live TV. Since I will obviously be the hero of whatever great White Uprising, I’ll be able to get Mark a cushy but fulfilling government gig so he feels happy and forgets about his debt. Of course, the trouble is that writing for White Nationalist websites doesn’t actually transform the world into Fight Club. When I was younger, I thought that it might, but I haven’t been so sure about that for years now.