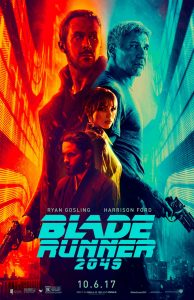 It is dangerous work, making a sequel to a classic like Blade Runner, Ridley Scott’s 1982 magnum opus. French Canadian director Denis Villeneuve’s Blade Runner 2049 is a very good film, but it inevitably falls short of the original.

I first discovered Villeneuve’s work with his 2016 science fiction film Arrival (discussed with John Morgan here [2]). Arrival impressed me as a highly imaginative science fiction film with an original visual style, told with an appealingly deliberate art-film pacing, with a stunning plot twist and a powerful emotional payoff. Villeneuve’s 2015 film Sicario is an excellent thriller/crime drama.

Blade Runner 2049 is more like Arrival than Sicario, and that is something of a problem. At 2 hours, 43 minutes, Blade Runner 2049 takes art-house pacing and style to Tarkovskyesque lengths. It is a real artistic gamble, and not an entirely successful one. I think this would have been a much more effective film — and yet also more commercial — if directed more like Sicario, i.e., edited down/sped up to 2 hours.

It would have been more like the original Blade Runner as well. I suspect, however, that Villeneuve may have rejected such a course because he felt intimidated by the prospect of doing a sequel that would invite too many comparisons with the original, so he struck out in a direction that would be more likely to please middlebrow critics and the sort of people who enjoy sitting through Solaris, Stalker, or 2001: A Space Odyssey. I generally like such movies, but I felt that Blade Runner 2049 runs out of steam near the end and fails to deliver the powerful emotional punch toward which it was building.

But this problem may have been inevitable, for there was probably no way of doing this movie without including Harrison Ford, and frankly, I wish they had done it without him, or pared his role down to a brief Yoda-like encounter in the second act, where he imparts some useful information to the questing knight and then is left behind.

I also wish they had replaced Ford with Ryan Gosling’s character for the third act, which would have eliminated all the gimpy appeals to nostalgia. I think a much more emotionally powerful conclusion could have been crafted with Gosling alone, for he undergoes the same transformation from egocentrism toward disinterestedness and detachment that Roy Batty does in the original. (I won’t explain this point, because it would entail spoilers, but watch the movie, and you will see what I mean.)

Gosling, frankly, is ten times the actor that Ford is. Gosling’s performance as K, a replicant and a Blade Runner, is stunningly subtle and sensitive, whereas Ford is capable of nothing but being a two-fisted, hard-drinking, crotchety old scene-chewer. Frankly, after he was on screen for 3 minutes, I wanted to run him through with a light saber. (Science fiction will not be safe until the entire casts of the original Star Wars and Star Trek are dead.)

I liked most of the other performances in Blade Runner 2049, particularly Ana de Armas as Joi, Sylvia Hoeks as Luv, and Carla Juri as Ana Stelline.

Jared Leto’s performance as the Mephistophelean businessman Niander Wallace doesn’t really compare to the original’s Eldon Tyrell, and frankly I don’t understand his behavior in the first act, when he casually kills a new replicant while monologuing. Nor does his behavior seem rational in the third act. If Rachel gave birth to a child, and Wallace can create a whole new Rachel, and he has Deckard, then he has both parents. So why does he need the child? Can’t he discover the secret of replication reproduction with the parents alone? And if the child really is a “miracle” — an event that we can’t replicate with natural causes — then even if he had her, there’s nothing he could do.

In short, the basic problem with this move is the script. Which is a pretty big problem.

The script also lacks the poetry and mythic dimension of the original, which is not just a sci-fi dystopia but an allegory about Satan’s rebellion against God — see my essay on this topic here [3] — whereas here we just catch glimpses of a Marxist revolt of the masses, which is a myth as well, in the superficial sense of the word.

The film touches on the same issues of personal identity as the original, but does not add any depth to them.

Blade Runner 2049 extrapolates from the dystopia of the original, incorporating ecological elements from Philip K. Dick’s novel Do Androids Dream of Electric Sheep? [4]. But other updates make no sense, such as the vast orphanage where predominantly white children dig through garbage. Isn’t this replicant work? And where are all these white orphans coming from? It doesn’t make sense that there are lots of surplus white children on an ecologically devastated planet.

The visual style of Blade Runner 2049 is stunning. Of course it is based on the original, but it develops it in interesting and original ways. It is truly the most successful element of the film. Like Terrence Malick, Villeneuve underscores the fact that cinema is inescapably a visual medium. Unfortunately, also like Malick, he also underscores the fact that a good movie needs to be more than just a series of striking images.

The music by Hans Zimmer and Benjamin Wallfisch effectively incorporates Vangelis’ original themes, but what is new is not memorable.

What this all seems to add up to is: Blade Runner 2049 is a superficial movie, but it is still successful as such. It held my attention for 2 hours and 43 minutes, but it lacked a powerful emotional payoff. It is good, but it could have been so much better. Still, it is definitely a movie that I will watch again, in the hope of glimpsing something deeper. I recommend it to fans of Blade Runner and science fiction aficionados in general. Take in a matinee with friends, then go out to dinner. I guarantee you will discuss nothing else.