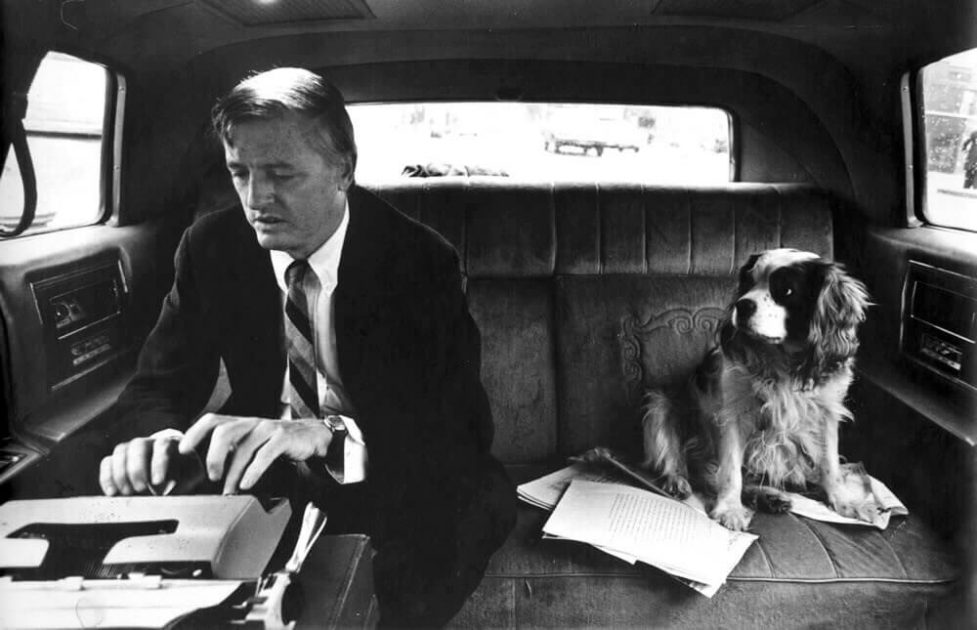 Buckley posing as writer in limousine with dog accessory

There is currently a minor contretemps in the Alt Right and Alt Lite as to whether National Socialism is of the Left or of the Right. This is a debate which, I believe, is generally of no practical import, is potentially divisive, and is rooted in several historiographical misapprehensions.

First of all, the terms Left and Right have been defined in capricious and conflicting ways by several generations of commentators. Is a neoliberal to the Left of a neoconservative? Is a Right Hegelian to the Right of a classical liberal? You tell me, and we’ll both know.

The Left/Right debate here is mired in a problem in historiography known as a false dichotomy. It seems to me that the real issue at hand is not a division between Left and Right, but between nationalism and globalism, between the interests of the ethnostate and those of a deracinated, mongrel leviathan dominated by a few corporations wielding global monopoly control. Until a few decades ago, big business was generally considered to be aligned with the Right; now the giant corporations are almost exclusively in the camp of the Left. Left and Right, therefore, have become definitionally pretty useless; they really only serve as terms of convenience.

Secondly, the debate as to where the NSDAP should be placed along the Left-Right political spectrum is part of a phenomenon first adumbrated by the British historian Herbert Butterfield in his famous essay “The Whig Interpretation of History.” Butterfield noted that the 17th-century Whigs reinterpreted history in a manner that justified their current political positions. In other words, the Whigs viewed the past as malleable and the present as fixed. Since the Whigs viewed their political policies as the eschatological realization of a path that was fixed by God, the past had to be “re-ordered” to conform with this divine plan of progress.

The Whiggish “re-ordering” of the past has been a problem on the Right ever since William F. Buckley founded National Review. Buckley, a status-obsessed pathological narcissist, viewed politics as an evolutionary process in which William F. Buckley would become socially acceptable to liberals. Buckley seemingly had no enemies on the Left and no friends on the Right, and was a serial traitor to his closest associates, throwing under the bus the John Birch Society, Joe Sobran, Revilo Oliver (the best man at his wedding), Patrick Buchanan, John O’Sullivan, and Peter Brimelow, among many others, as his Weltanschauung drifted ever leftward. As the Left moved further leftward, Buckley was always there chopping off the Right wing of the Right. Under Buckley’s editorship of National Review, the Overton window became essentially a one-way mirror.

In his recent debates on the political orientation of the NSDAP, Vox Day has exhibited not a small amount of Buckleyism. Like Buckley, Vox is forever reminding us of how intelligent he is. There is, however, an underlying insecurity in someone who will cite his IQ score as a conversation starter. It comes as a surprise, then, for someone who is as self-evidently and self-referentially intelligent as Vox that he exhibits such a limited knowledge of the history of the Third Reich. The Nazi economy really was a mixed economy. Private ownership of property and industry remained largely in private hands. The Nazis did much to increase private ownership of family homes and many protections were enacted by Agriculture Minister Walther Darré to prevent bank foreclosures of family farms. It is also important to keep in mind that the first six years of the Third Reich were devoted to war preparation; the second six years were during WWII. In such times governments always exert greater control over their respective economies. The economy of the United States during WWII was hardly a paragon of laissez-faire virtue.

Interestingly, the Strasser brothers (Otto and Gregor) and Joseph Goebbels initially were leaders of the “Left” faction within the NSDAP who advocated a socialist course for the party. This was opposed by Hitler himself and was an issue that was not resolved until the Night of the Long Knives in 1934.

Even in matters of aesthetic policy, the Nazis were hardly of one mind. On the same weekend in 1936, the music of Igor Stravinsky was performed and promoted at a festival of new music sponsored by the Reich Chamber of Music while the composer was denounced at a conference on Aryan art sponsored by Party ideologue Alfred Rosenberg. It is somewhat humorous to note that the Third Reich exhibited greater diversity of thought than not only the Soviet Union of the Stalin era but also the typical American university of the present day. Generally speaking, intellectual diversity is more associated with the Right than the Left. Those slave-owning Founding Fathers certainly valued free speech much more than the typical SJW genderqueer Google executive or associate dean for affirmative action at the local community college.

Probably the most significant Left/Right distinction that places the NSDAP within the spectrum of the Right was the Nazi Party’s embrace of biology. The single idea that unites all varieties of the Left is the denial of biology. The sine qua non of all leftist ideology is the Lockean tabula rasa, that human nature does not exist, that genetics is nothing more than a social construct, and that man is a palimpsest upon which anything can be imprinted. In this regard, the NSDAP seems to be as far as removed from Leftist ideology as possible.

But the most unbelievable remark made by Vox Day during his most recent debate was that all philosophical disputes can be reduced to Aristotle vs. Plato. This is not only a false dichotomy; it is also a canard. This ridiculous example of historical reductionism has been around for decades. Plato has been falsely branded as a fascist or a communist because extremely shallow writers—most notably Ayn Rand—despised Plato due to his use of Sparta as a model for his ideal government as outlined in The Republic. In this philosophical dispensation, Aristotle is viewed as a precursor to Barry Goldwater. The idea that there can be any direct political analogy between the Greek polis of ca. 450 BC and the exhausted and deformed American democracy of the 21st century is ludicrous on its face. I am unaware of Aristotle’s view on marginal tax rates, but I doubt that the author of Politics and the Nicomachean Ethics would have been impressed with the Republican Party Platform of 2012. I am also fairly confident that Alexander the Great’s tutor would not have been impressed with the likes of Mitt Romney and Paul Ryan.

Vox’s constant celebration of himself and his use of the Randian Aristotle/Plato riff, I believe, are clear indications of his real political orientation. In his heart of hearts, Vox Day thinks of himself on the model of Ayn Rand’s pulp Zarathustras, Howard Roark and John Galt. Vox has now deigned twice to come down from Olympus and set us to rights about the true nature of National Socialism. In the end, we have learned little about National Socialism and much about Vox Day. But I am unimpressed with his preening, cheap rhetoric, and attempts at ideological policing and purging. We don’t need another Ayn Rand or William F. Buckley.