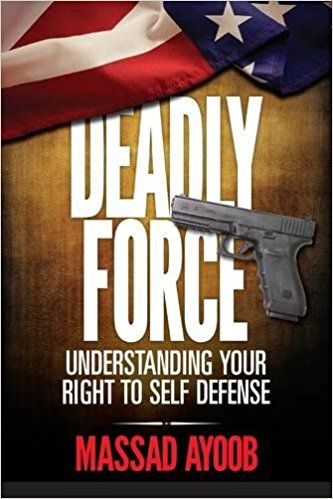 In the wake of Charlottesville and other street battles between pro-whites and the antifa, it is a good idea to take a look at the legal aspects of self-defense. For unlike movies and TV shows where the villain is killed by the hero and the show ends with the hero honored by all, violent self-defense has serious legal ramifications that could last for years. Fatal shootings have even more legal ramifications. It is thus important to understand the ins and outs of legal self-defense.

The expert on the matter is Massad Ayoob, an assimilated Yankee New Englander of Arab stock who is a “cop’s cop.” What’s remarkable about Ayoob’s career isn’t his long time wearing the badge and walking the beat, but his service as an expert witness regarding firearms and self-defense. Ayoob crystalizes his experiences and considerable body of research on self-defense in his book Deadly Force: Understanding Your Right to Self Defense.

Ayoob approaches the issue from a Civic Nationalist, pro-gun point of view.[1] [2] He mentions racial issues, but doesn’t explore them further. From a white advocacy point of view, the problem of “gun violence” in the United States isn’t “guns,” it is non-whites — especially blacks — with guns. Ignoring the broad interpretations of the Second Amendment, why isn’t there a movement to keep guns out of the hands of crime-prone blacks and other non-whites, while leaving gun rights for whites intact?

When is it OK to Shoot?

Ayoob writes, “The set of circumstances that justifies the use of deadly force is a situation of immediate danger of death or great bodily harm to oneself or other innocent persons. Since deadly force is normally only allowed as a last resort, the danger should be otherwise unavoidable and not created by the defender himself.”[2] [3]

To put it simply, a self-defense shooting is justified when a person has a reasonable fear for their life. This must be reasonable fear, not “blind” fear. There is more leeway for cops regarding reasonable fear than civilians. A person appearing to reach for a gun, such as the late Philando Castile, does, as we saw by the results of the trial of the cop who killed him, cross the threshold for reasonable fear leading to a legal shooting.[3] [4]

Furthermore, weapons of deadly force are all legally equal even if you have an AR-15 and they only have a knife. It is always reasonable to shoot someone armed with a knife or bludgeon who you reasonably believe is trying to kill you. It is also reasonable to shoot someone trying to run you over with a car, but otherwise “unarmed.” Indeed, as the public has come to know due to blessings of Islamic immigration, a car is a most deadly weapon. Additionally, overwhelming disparities in size and fitness between two parties in a dispute, such as a 200-pound muscled young man vs. a “little old lady,” can justify a deadly self-defense shooting on the part of the smaller person.

Even armed with a knife, club, car, or the “fists of steel” of an athlete, an attacker doesn’t need to be in arm’s reach of the person shooting in self-defense. In 1983, Salt Lake City Police Sgt. Dennis Tueller discovered and then published the fact that an attacker armed with a contact weapon such as a knife could cross a distance of 21 feet in less than a second and a half. In his own experiments, Ayoob found that fat people, old people, children, and even people in wheelchairs could cross 21 feet in less than 2 seconds. In other words, legally, even a distance of 21 feet is close enough to be a just self-defense shooting. With all things legal though there are exceptions and mitigating circumstances. A shooting isn’t always justified within 21 feet and not necessarily unjustified outside that distance. Again, one must have a reasonable fear for one’s life and the shooting must be unavoidable, and the deadly situation not created by the defender himself.

Thou Shalt Nots of Firearm Self-Defense

Ayoob gives some good “thou shalt nots” of self-defense and backs up his ideas with many examples from the field. Before getting too deep into the “thou shalt nots,” one additional thing must be discussed. If you are in a dispute you think could lead to deadly violence, be the first one to call the police. By calling 911, one gets into “the system” as a victim. When dealing with a government agency like the police, such bureaucratic trifles set the tone for all that follows. If one is dealing with a long-running dispute with a stalker, neighbor, etc. that could turn deadly, get your side of the story documented by the police after any and all negative interactions with that person. Should the situation come to a head in a just self-defense shooting, the documentation will go a long way in proving one didn’t just shoot the neighbor/stalker/whomever out of spite. With that said:

If you ever get involved in a shooting, Ayoob has a five point checklist for what you should do:

I: If you Choose to Carry, Always Carry as Much As Possible (i.e. big enough caliber, and spare ammo).

II: Don’t Carry A Gun If You Aren’t Prepared to Use It (know how to shoot and be aware of your surroundings.)

III: Don’t Let The Gun Make You Reckless (there is a classic Johnny Cash song on this theme…)[6] [7]

IV: Carry Legally (Get the permits, fill out the paperwork, pay the fees, and know the law in your state.)

V: Know what you are doing.

VI: Concealed means Concealed (don’t scare people with part of your shooting iron sticking out or otherwise visible in some way.)

VIII: Understand the Fine Points (state law and city law may be different.)

IX: Carry an Adequate Firearm (.22 and .25 caliber is too small, use what the police or military uses.)

When choosing a self-defense weapon, there are some other considerations. As mentioned before,  your self-defense gun, your possession of the gun, and the ammo must be legal. Ayoob even recommends hollow points (if legal in your area.) Don’t be an idiot.

Don’t get a self-defense gun with a macho brand name like Cobra or high-testosterone symbols like a “Punisher” skull. Don’t get a gun with a “hair-trigger” pull. Furthermore, use factory-made ammo, not home-loaded ammo. Don’t use bullets such as “Zombie Killer” ammo or the anti-Muslim “pig-greased” ammo. In these matters you must be seen as a solid citizen who isn’t immature or reckless. Anti-Muslim “pig greased” ammo, “Punisher” skulls on the pistol grip, and other macho stuff will imply something about your personality you might not want brought up in court.

So many white advocates have been tripped up with firearms that Johnny Cash’s song about not taking your guns to town is probably the best advice. However, this advice must be tempered with the knowledge that the antifa is a dangerous force. [7] [9] In this circumstance, the right answer is that the legitimate authorities are obligated to protect the speech of white advocates and white advocates must demand that protection even in light of the Charlottesville fiasco. White advocates must focus on ensuring their message gets out in as many ways as possible. It is probably time to focus on owning webhosting services, fundraising applications, etc. It is also a good idea to focus resources on the issue of legal ownership of a domain name on the internet. White advocates have a large, growing audience.[8] [10] They don’t need to brawl, they need to communicate.

[1] [11] Ayoob followed the Trayvon Martin case in his blog. He points out many of the legal ins and outs of the trial. http://www.backwoodshome.com/perspectives-on-the-george-zimmermantrayvon-martin-shooting/ [12] One thing we haven’t yet seen is a “neo-Nazi” going free after shooting a colored attacker. So far, most white advocates caught up in a shooting get convicted. (See the write-ups about Ben Klassen and Richard Butler on the SPLC’s website for more details.) Your shooting might be legal, but white advocacy is always going to be a burden in a trial.

[5] [19] Massad Ayoob mentions, and disagrees (to a degree) with the video that went viral about not saying anything to police if questioned for a crime. https://www.youtube.com/watch?v=d-7o9xYp7eE [20] In a justified shooting, you must get your side of the story out immediately.

[7] [23] The authorities must move against Antifa. Should “the state” fail to keep order between two political factions, we have a situation such as Bleeding Kansas in the 1850s and society moves along the road to civil war. Furthermore, while the Antifa might get temporary, conditional Middle American support by attacking “neo-Nazis” carrying torches, they also attack mainstream businesses, city property, Republicans, churchgoers, moderate Democrats, and police in liberal cities like Portland and Seattle. Everyone is thus a potential “neo-Nazi.” Antifa’s continued shenanigans will not continue to be tolerated. That is to say won’t be tolerated, unless the political elite is so hostile and spitefully Semitic that they choose to go all in with Antifa and let it all come crashing down.

[8] [24] This poll shows that 10% of respondents feel “neo-Nazis” have a point. http://abcnews.go.com/Politics/28-approve-trumps-response-charlottesville-poll/story?id=49334079 [25] Furthermore, read the comments on former Vice President Joe Biden’s response to Charlottesville: https://www.theatlantic.com/politics/archive/2017/08/joe-biden-after-charlottesville/538128/#article-comments [26] One comment, from Media_Bladders reads:

Yep, Biden claims that Trump has emboldened white supremacists — but he was noticeably silent when Obama invited Black Lives Matter to the White House and whipped up racial tensions in Ferguson and Baltimore, not to mention sticking his nose in the Trayvon Martin case before the evidence had even been gathered.

Face it, Joe, racial animosity got worse during the 8 years you spent as Vice President. Don’t try to act like you give a crap now — maybe you and your boss should have tried to extinguish the fire with something other than gasoline.