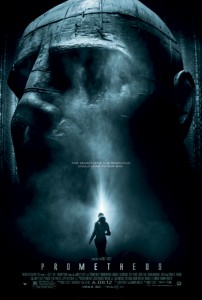 Prometheus, an omen of the atrocity to come that was Diversity Awakens [3], is an example of how box office anticipation can propel a franchise into the hands of saboteurs. Unlike the tightly scripted, self-contained stories of the original Alien and exhausting Aliens, both of which can be viewed independently as standalone films (despite being directly sequential), Prometheus demonstrates the failure of the “franchise movie” — sprawling, incoherent without the context, and lacking any real narrative urge except to set up backstory to it’s already-successful predecessors.

I’m not sure if Damon Lindelof is in fact Jewish, but it would not surprise me. Like his colleague Jew-Jew Abrams who co-created the nonsensical Lost, Lindelof seems to think that a ‘good film’ is created by stitching together Hollywood clichés. It’s all here folks: the villain who models himself as a perfect Anglo, a blonde, blue-eyed Ice Maiden dressed in a quasi-Hitlerian jumpsuit, the heroic house nigger cucking the white man, speechified nonsense about “humanity” and white archetypes drawn as demons at every turn. What are the “Engineers” except a confused, science fiction condemnation of white people’s technological impulses towards their own defense? They are a race of Aryan-proportioned humanoids with strong brows and impeccable cheekbones, mucking around with space travel and genetic engineering to create biological superweapons. In a cringy “twist,” they are revealed to have human DNA. Of course!!

The Aliens in this movie are not even proper aliens, they are CGI squids that bear no resemblance to the classic xenomorphs and could blend into any other franchise. The set design is memorable only to the extent that it recycles motifs from its forerunners, and even then only serves to undermine or dilute them. The famous dead engineer resting in what appears to be some kind of space anti-aircraft gun from the original is recycled into a live action sequence so artificial and superfluous it could compete with any one of the Star Wars prequels for irrelevance. Unlike the collection of believable colonists and interstellar truckers that make up the victims in Covenant and Alien, the crew of the Prometheus is a forced assembly of Hollywood big shots Lindelof wants to press-gang us into idolizing. When Harry Dean Stanton appeared on the silver screen bizarrely getting rained on in deep space amidst clattering chains, conjuring up the deepest fears of cat owners that their pet could be leading them towards lethal things that go bump in the night, he was an actor in service to the story and the audience, not a foible and Positive Portrayal in service to black supremacists. Yet that is exactly what Idris Elba’s entire career is grounded on — totemizing the pseudo-democratic oligarchy and BRA.

The suspension of disbelief is continually chipped away by the tackiness and vulgarity of the supporting cast and the outright imbecility and repetition of established tropes. Charlize Theron has does her bad Barbie Grrl Power best to snarl, sneer, and shag her way towards making white women reprehensible jackboots. She plays the same character along with the same giant dust cloud escape scene later on in her career in Mad Max: Femi Road. A forgettable Asian man with a square face makes do with cheap buddy-buddy “comedy” lines to show wincingly forced intra-racial camaraderie, and the white “geologist” who “fucking loves rocks” is about as believable as a Somali meth addict being some kind of commanding officer. No biggie, though — that’s exactly what happens in Rogue One. The possibly Jewish hipster with fashion frames and a tentacle fetish does get snaffled by the computer squids early on, so I guess it’s not all bad.

Much as this film is a train wreck of logic, reason, and directorial ambition, that’s not to say it doesn’t have elements which are likeable.

Noomi Rapace has had the airbrushing and slimming to make her a gorgeous and delicate Hollywood fairy and believable as Dr. Elizabeth Shaw, even in the most extreme body horror situations, like terminating a computer squid fetus she’s been impregnated with. I’m not totally convinced she’s fully “Swedish” though — her slightly downturned nose and ever so elongated face trip off my finely-honed instincts for recognizing the Lizard People.

Michael Fassbot steals the scene as David, the amateur dramatics android, but he’s so self-evidently malicious and openly in conflict with the rest of the crew that no amount of acting chops can induce tension.

Rapace’s boyfriend, however, is a model pulled from an underwear catalogue, and while his rough stubble might get the ladies and eligible bachelors going, like all pinups he eventually comes off the wall and is relegated to the trash. He is turned into a Marvel X-Men type super-strength zombie and is promptly flamethrowered, which is about what he deserves for auditioning for a scientist role so beyond his capability for self-reflection and serious-mindedness.

Little of the film makes any real sense. The rousing score intended to conjure up the grandeur of space exploration clashes jarringly with the dead bodies littering the set and tentacle squids in the vaginal and computer graphics departments. Fassbot, by far and away the best actor and only one to survive the doomed voyage of Prometheus into the annals of B-movie history, is reduced to a disembodied head and shoved in a bag, perhaps a subtle indicator that Lindelof wants to smother successful white guys if he can get away with it. He is miraculously revived and rebuilt between Prometheus and the franchise reboot of Covenant. An actual xenomorph, fully computer generated of course, is tacked on at the end to connect it to the rest of the franchise. Like Hollywood intends to do with the racial reality our senses know and experience, Lindelof clearly had hoped to replace Ridley’s Alien series with a hollow fake.