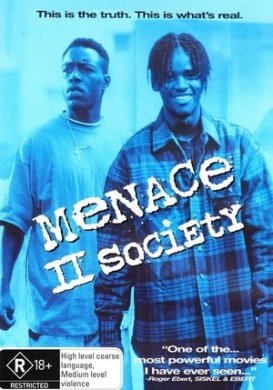 Although the Oscar Winner for Best Picture that year was an escapist, integrationalist Western called Unforgiven, Menace II Society was quite possibly the most culturally impactful movie of 1993.[1] [2] Its realism was taken so seriously by those who made it that Tupac Shakur famously left the film due to a difference of interpretation with the directors.Ultimately, its metapolitical impact allowed for sweeping legal changes that stopped a crime wave that had been ongoing for three decades.

This film follows the last summer of a young black man named Caine (Tyrin Turner). We are introduced to Caine in the opening scene, where he becomes an accomplice after the fact in the horrific murder of two Korean shopkeepers by his friend O-Dog (Larenz Tate). The story then follows Caine through a series of assaults, murders, petty crime, and an arrest (where he is nearly identified as a culprit in the murders), and finally Caine perishes – somewhat heroically – in a drive-by shooting. Ultimately, Caine’s decisions bring about his own death.

Due to its gripping story and intense cinematography, Menace II Society is easily the greatest work of the “hood movie” genre. Hood movies portray the lives of young black men in the “ghetto” or “in the hood.” They are usually tragic in that a character is killed randomly, or as a result of black-on-black violence. In some cases, such as 1991’s Boyz n the Hood, a character rises above the ghetto and goes off to university. Hood movies also have a message that is a mix of Black Nationalism and encouragement to “turn your life around.”

Menace II Society, and its entire genre, must be understood in the context of the society in which they were created. The golden age of hood movies was the early 1990s. This was a time that followed several decades of a spike in appalling, black-driven crime due to the impact of crack cocaine. At the time of the Menace II Society’s’ release, it seemed that such crime had always existed and always would exist.

The film is a very realistic depiction of the core of African-American culture. While this film takes place in Watts, Los Angeles, every black ghetto in America is remarkably similar. Indeed, directors Allen and Albert Hughes grew up in the black mecca of Detroit, so there is a sense that it is based on their own experiences. The real-life shootings and fights shown on World Star Hip Hop are remarkably like the fictional ones in Menace II Society. Every black newscaster, government official, or professor is connected to this culture, no matter how much money they have or how well-spoken they are.

Menace II Society has no fig leaf of a character leaving the ghetto to go off to study at Morehouse or Tuskegee University. Nobody turns their life around. The movie is fatalistic, and death isn’t cheated – or even delayed. The characters aren’t heroes or anti-heroes, they are simply evil. For example, while Caine is subjected to a barrage of Bible verses by his grandparents, we see that he and his friends don’t care about religious instruction, nor do they even attempt to attain redemption. O-Dog even shows the surveillance tape of the murders he committed to entertain his friends. Why bother to conceal murder? “No snitching” is a deeply-held value in the black community. Indeed, none of O-Dog’s friends have any sympathy for the victims – they hoot and howl with delight while they watch.

An important part of all hood movies is their “message.” This is usually an encouragement to study and work hard, mixed with Black Nationalism. Of all nationalist ideologies, there is nothing so absurd and unreflective as the “message” coming out of Black Nationalism. For example, in Menace, the narrator Caine says in a passive tone of voice, “When the riots stopped, the drugs started.” Actually, blacks rioted on their own and then chose to do drugs. With the exception of one white character who is attempting to commit insurance fraud, Menace II Society consists solely of blacks behaving badly with no involvement by whites, and yet the “message” is [5]:

Actually, being a black man in America is a condition that is neither easy or hard in itself. It becomes difficult if you behave in a criminal, murderous way and associate with murderous criminals. The “message” in Menace II Society is nothing profound or worthwhile. When writing about the religious interpretations of the hip hop revolution that was occurring at the same time that Menace II Society was released,[2] [6] Andrew Fraser sums up the situation [7] more accurately:

. . . [T]he disaster that is contemporary Black America is one largely of its own making . . . [W]hat we see . . . may not be the suffering Black avatar of Jesus Christ but rather a glimpse into the godless heart of darkness.

Menace II Society is bleak, horribly bleak, but it is the perfect example of a successful metapolitical work, although it is likely that nobody involved in its creation intended that things should turn out as they did. Menace II Society’s impact was to convince liberals and members of the Democratic Party to be tough on crime, especially black crime.

In 1993, President Clinton’s aides claimed that he could see nearly every side of a complex problem and then make a solid decision based on that. Successful politicians can also pick up on the vibe emanating from cultural works, which influences their policy decisions.[3] [8] Menace is so bleak, and its message is so clearly off-base, that one can see that the green light was switched on for a crackdown on black crime after its release – even though officially, it was racially neutral.

With this in mind, President Clinton enacted the Violent Crime Control and Law Enforcement Act of 1994.[4] [9] This bill funded police departments, established more prisons, and got guns like the TEK 9 off the streets. Clinton also adopted strict anti-drug enforcement. Drug laws work very well in that the evidence (the drugs themselves, paraphernalia such as crack pipes, residue, etc.) stands on its own in court. “No snitching” doesn’t apply in those cases. After Clinton, Africanized inner-city no-go zones were turned around as more and more blacks went to prison.

It is ironic that a black-made movie, coming at the start of the original “first black President’s” term, exerted influence that helped inspire a clampdown on black crime. 1993’s Oscar Winner, Unforgiven, was a good Western, but Menace II Society changed things in the real world – although there is still much left to do.

[1] [10] One must wonder what those intelligent and dedicated groups of whites who have fought for civil rights, integration, and other projects aimed at uplifting blacks must think when they see the results of their efforts in works such as this one.

[2] [11] The movie also coincided with the gangsta rap semi-revolution in music. In 1993, South Central Los Angeles was the epicenter of gangsta rap. Musicians such as Suge Knight, Easy-E, Snoop Dogg, Ice-T, and others released songs that glorified robbing liquor stores, shooting people, and other crimes. This genre was only a semi-revolution because all black music is fundamentally a nineteenth-century, old-time minstrel show. Even rappers discussing murder are not far from the “coon songs” of 1900. Indeed, “coon songs” themselves glorified black criminality. The differences between gangsta rap and minstrel shows is only one of degree.

[3] [12] With that in mind, we see that Clinton, for all his faults, was quite possibly the most subtly redpilled President since Harry S. Truman. Indeed, the Clinton administration’s first crisis was the threat of an immigration wave from Haiti. Clinton sent the military, immigration officers, and the Coast Guard to turn back the tide. It is also widely believed [13] that Clinton had read Peter Brimelow’s book, Alien Nation.

[4] [14] The 1990s were also an exceptional period of economic growth and prosperity. This growth was just beginning at the time of Menace II Society’s release. Commenting on this is beyond the scope of this article, but I would like to suggest that broad economic growth and prosperity (among other factors, such as a high-IQ society with the rule of law) requires a way for a large portion of the people to tap into a cheap, but valuable, resource. In other words, prosperity requires something of high value which can be acquired by many at a low price. With a little bit of work, this resource can be made very profitable. For example, at the close of the Civil War, Congress enacted the Homestead Act, which allowed many people to obtain free land in the West. The post-Second World War GI Bill allowed many returning veterans to get a cheap education at a time when there was an increase in jobs for university-educated people. Nowadays, university educations are expensive, and may cripple a graduate with debt, and there are such fewer jobs that this trend has already reached its end. During the 1990s, gentrification – the process of removing blacks from the inner cities – was just beginning. The Clinton administration’s Section 8 vouchers, tough crime laws, and other methods used to remove blacks from high-value real estate in America’s cities turned out to be a bonanza for many. A real estate boom can create a great deal of money for many people. It is very likely that this fueled much of the growth of the 1990s.